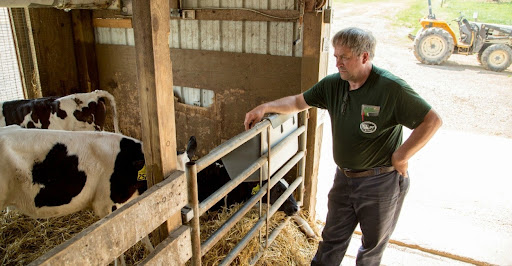 Ever wonder why people keep saying that parts of our government is out of control and abuse their authority? Here's another example of why. These farmers should get their money back.

The IRS (Internal Revenue Service) seized $63,000 from Frederick, Maryland, dairy farmers Randy and Karen Sowers under the "Civil Asset Forfeiture" laws. That's the laws the government uses when they take money from folks -- both the criminal and the innocent.


Under the Civil Asset Forfeiture laws, right now law enforcement agencies have the authority to seize money and property if you are simply "suspected" of being connected to a crime.

Fact is a number of "innocent" property owners like the Sowers have come forward after having money seized without ever being charged or convicted of a crime. And frankly, the law itself has two basic flaws which the government does not seem to understand:

First, confiscating the assets of criminals is no big deal to criminals because the criminals obtained those assets illegally. Criminals have no attachment to those assets simply because they see it as something they can steal more of. That is completely unlike the innocent citizen who has worked and scraped, and has had to use a little creative bookkeeping to steal from Peter to pay Paul, all to put aside a little honestly earned money.

Money worked for has value. And sadly, because of a litany of rules and regulations these day, citizens are made to figure ways to obey the laws and still get ahead these days.

Second, the Civil Asset Forfeiture laws were created to seize the assets of criminals -- not innocent Americans.

In 2012, the IRS seized $63,000 from the Sowers' bank account under Civil Asset Forfeiture laws. The tax agency "alleged" that the couple committed "structuring violations", which involves making cash deposits or withdrawals of under $10,000 to avoid bank reporting requirements.

According to the government, the money deposited into the farm’s account, though, came from customers who paid in cash at the local farmer’s market. Nothing illegal about that either.

And frankly, what is all of this "alleged" crap about? The Sowers either broke the law or didn't, so why was their money stolen by the IRS if they did not do it and were only "alleged" to have done it?

Friends, I am big on what words mean. The word "alleged" is an adjective that means:

And frankly, I want to know why the IRS can go after a family farmer for $63,000 when Black activist Al Sharpton owes $4.5 Million? Why hasn't his assets confiscated? Why is it that farmers are targets of the IRS, but not crooked politicians like say Hillary Clinton whose Clinton Foundation is known to have laundered Millions of dollars?

Want to know why nothing was done to arrange payments and instead the Sowers' savings was confiscated? Want to know how it is that wealthy politicians like Hillary Clinton and friends of Obama like Al Sharpton can break the law and nothing happen to them, while regular citizens, citizens without political clout get punished? The answer to those two questions comes in the form of the IRS and other government agencies knowing who they can and can't go after.

Farmers and ranchers, blue-collar workers, those who feed America and make our nation successful are easy targets. And yes, the IRS and other agencies know full well that we do not have the clout it takes to fight back.

For example, while Hillary Clinton and Al Sharpton can mock the law and the investigations or simply disregard the law, the Sowers' were punished for being vocal about their plight at the hands of the government.

It's true, reports say that while the couple was in the midst of settlement negotiations with the government, hoping to have most of their money returned, Randy Sowers spoke with a reporter from The City Paper in Baltimore, Maryland, about his experience with structuring and "Civil Asset Forfeiture."

According to court filings, on the day the article was published, Stefan Cassella, the assistant U.S. attorney overseeing Sowers’ case, told the family’s lawyer he had a "problem" and was no longer willing to negotiate a settlement amount.

Yep, it sounds like someone in the IRS read the paper and got a bur under their saddle regarding Randy Sowers. And friends, if there is one thing that we have all learned since the Obama administration has taken office -- the government is not above abusing their authority. In fact, since 2009, the government is drunk with power and has been shown to abuse its authority rather than work with American citizens.

The Sowers did eventually settle, but forfeited $29,500 to the Federal Government. And yes, while the Sowers have had some of their money returned -- the couple filed a petition with the government last month asking for the $29,500 back.

The family’s case is just one of many that has emerged in recent years involving "Civil Asset Forfeiture."

Now, a bipartisan group of lawmakers is asking the Treasury Department to return the money it kept after the couple settled with the government.

Yes, believe it or not, a bipartisan group of Republican and Democrat Congressmen and women on the House Ways and Means Oversight Subcommittee is actually coming together to "ask" the Treasury Department to return nearly $30,000 it seized from Maryland dairy farmers in 2012.

On August 11th, 2015, the group of Congressmen and women all signed a letter and sent it to Treasury Secretary Jack Lew. Their letter "asked" that the agency to return $29,500 the Internal Revenue Service seized from Frederick-based dairy farmers Randy and Karen Sowers through "Civil Asset Forfeiture".

The lawmakers also "asked" Secretary Lew to review similar cases and return money seized by the tax agency under the practice.

The reason that I preface "asked" is because the IRS is so large and scary that not even folks in Congress want to upset them. Fact is, if the Representatives who signed that letter upset Secretary Lew -- then there is a good chance that the IRS, or another of the many vindictive government agencies out there, would make their lives a living Hell.

Their letter said, "Treasury still holds funds seized from innocent business owners who settled their cases only because they could not afford to do otherwise. As the Treasury Secretary, you have the opportunity to right the wrong done to these small business owners."

Last  year, Congressman Tim Walberg [R-MI] introduced The Civil Asset Forfeiture Reform Act of 2014 "to restore the balance of power away from the government and back to protecting individual rights and due process."

Under current law, agencies like the Internal Revenue Service (IRS) and Department of Justice (DoJ) may take property suspected to be in connection with a crime without charging the property owner of a crime.


The bill introduced, The Civil Asset Forfeiture Reform Act of 2014, was meant to left the burden of proof for determining a forfeiture from a "preponderance of the evidence" to "clear and convincing evidence," requiring the government to have more concrete proof of the property’s connection to a crime.

The bill was meant to shift the burden of proof for the "Innocent Owner Defence" from the owner of the property to the government. Yes, The Civil Asset Forfeiture Reform Act of 2014 required that the government notify all owners of forfeited property of the possibility of using a public defender to argue their case.

Want to know how Obama is funding ObamaCare and giving Billions of taxpayer dollars to Iran before the deal is agreed upon? Friends, the Civil Asset Forfeiture fund collected more than $2 Billion in 2013. So yes, maybe that is why the The Civil Asset Forfeiture Reform Act of 2014 introduced by Congressman Tim Walberg [R-MI] was killed by the Democrats last year.

There is some good news to this travesty of justice.

In response to reports identifying innocent Americans who had money seized due to asset "structuring" violations", the IRS changed its policy regarding such seizures in October 2014. Under the new policy, the IRS only pursues structuring cases in which the money stemmed from illegal activity.

And among others that are now taking a look at the whole Civil Asset Forfeiture laws, the Justice Department changed its own guidelines surrounding structuring violations.

In their letter to IRS Secretary Jack Lew, the bipartisan group of Representatives point to the IRS and Justice Department’s policy changes as the reason why the Sowers' money should be returned.

In their letter to IRS Secretary Jack Lew, the Representatives said, "The IRS’s October 2014 policy change is tantamount to an admission that it never should have seized funds that were not associated with an illegal source. The Sowers and others like them should be treated with the same fairness applied to cases going forward."

So now, let's all hope that the head of the IRS agrees and let's those farmers have their money back. After all, besides the fact that they were not guilty of anything, it is just the right thing to do.