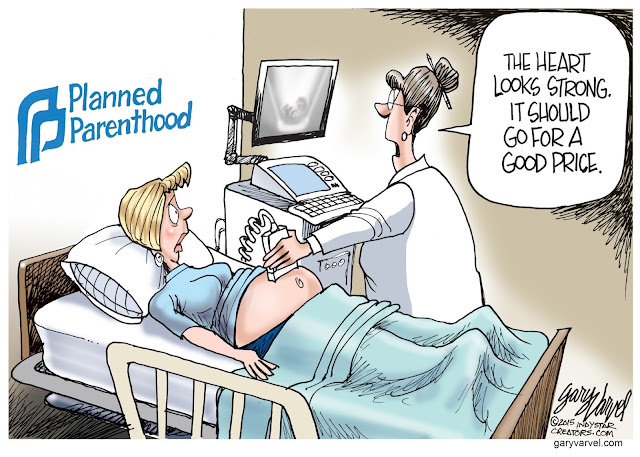 Want proof that Liberals are stupid? Here you go!

#25 -- Liberals see the ability to protect one's self and property with a firearm and the death of a violent assailant and/or intruder as horrible and wrong.

#24 -- Liberals see drug dealers who are responsible for over-dose deaths as non-violent criminals, murderers who commit brutally heinous crimes as misunderstood victims of society, and our troops as "Domestic Terrorists."

#23 -- Liberals are OK with cutting the pay of our troops while increasing the funding of Democrat donors such as Planned Parenthood and radical Islamic anti-American OPEC nations.

#22 -- Liberals fight against Capital Punishment of cop killers, create organizations to protect the killing of animals, worry about a scam called "Global Warming," are against the selling of fur coats, and yet see unborn children as something that should be slaughtered and sold in pieces or as a whole.

#21 -- Liberals look at an aborted child and wonder how much they can sell it for. And yes, wonder if they can charge more for parts or as a whole while laughing about it over a glass of wine.

#20 -- Liberals accuse Corporations of influencing elections in favor of the Republicans while not mentioning that one of the biggest Corporations in America is Planned Parenthood which gives MILLIONS of dollars to Democrats.

In fact, Liberals see nothing wrong with giving Planned Parenthood, which is a multi-BILLION dollar Corporation, over a half-a-BILLION dollars a year in taxpayer money knowing they sell body parts of dead babies because Democrats allow them to do so.

#19 -- Liberals see nothing wrong with being hypocrites and voting for Criminals, Socialists, Communists, or a Muslim who hates America.

#18 -- Liberals see nothing wrong with drug use, gay marriage, plural marriages, and the Muslim desire for child brides.

#17 -- Liberals see nothing wrong with sex with a child, proven by their desire to teach sex-education to mentally undeveloped kindergartners.

#16 -- Liberals talk about the greed of the rich at $35,000.00 per plate Obama campaign fund-raising events, even when he is not running for office.

#15 -- Liberals approve of giving BILLIONS of dollars to Iran to keep funding terrorism and build a Nuclear Weapon to attack us and our allies in the Middle East.

All while at the same time cutting military retirement pensions and slashing Social Security Disability benefits to needy Americans.

#14 -- Liberals want to repeat the mistake of the Clinton Administration which enabled North Korea to build Nuclear Weapons and threaten their region and America.

#13 -- Liberals are OK with Muslim terrorists beheading Christians in the name of Allah, and fret that Muslims might be harmed by a Fox News report of what took place.

#12 -- Liberals see nothing wrong with taking away the 2nd Amendment Constitutional rights of Veterans, people on Social Security, and Conservatives, by violating their privacy and going into their medical information.

#11 -- Liberals call Americans involved in the Tea Party movement "Extremists" and "Domestic Terrorists," and think it's OK for government agencies to be used to attack them for exercising their Constitutional Rights to Free Speech and Protest.

Liberals see groups like the Tea Party, which organize out of concern for America's fiscal problems, and out of a desire for the Federal government to adhere to the Constitution of the United States, as "Radicals."

#10 -- Liberals see our government collecting more tax dollars from the people than any nation in recorded history as not enough! They then complain that the government doesn’t have nearly enough money coming in to allow the Federal government to run properly. All while they fund special their interest groups and our enemies abroad.

#8 -- Liberals protect Foreign Criminals by creating Sanctuary Cities. All while refusing to accept that someone here "illegally," someone who has broken the law, is a "Criminal."

#7 -- Liberals claim that the government still discriminates against Black Americans when they have a Black President, a Black Attorney General and almost 30% of all Federal employees are Black -- while less than 14% of the entire U.S. population is Black.

#5 -- Liberals see the killing of a Black thug by a White person defending his or her self as Racism and a Hate Crime, yet doesn't think it is Racism or a Hate Crime when a Black thug kills a White man or woman.

#4 -- Liberals want to enslave Black America for a second time. They lie and cheat and steal from them. And yes, for more than 200 years, they have acted like the Democrat Slaves Owners who ruled the Southern plantations.

They see Blacks as too stupid to know the truth about their own history and how the Democrat Party fought to keep slavery alive.

#3 -- Liberals see nothing wrong with naming government buildings, research facilities, bridges, highways after Democrats who are proven Racists. Some who fought against the 1964 Civil Rights Act, and some who were once in fact members of the Ku Klux Klan.

#2 -- Liberals see the Confederate Battle Flag as offensive while at the same time seeing the desecration of the American Flag by stomping or walking or burning it as Freedom of Speech.

#1 -- Liberals have no moral compass. They do not believe in ethics. They don't know right from wrong. And yes, they are devious cowards.