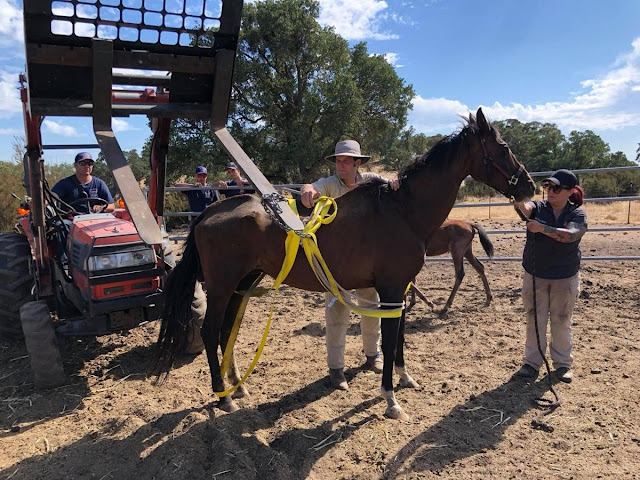 On September 9th, 2019, the Calaveras Enterprise reported that approximately 60 starving horses, mules and donkeys were seized from a 50-acre pasture in Valley Springs. The report stated that evacuation teams made up of "volunteers and Calaveras Consolidated Fire Protection District firefighters corralled the critters and put them into trailers to get them to some place where there would be food enough to get them back to health."


A number of different agencies were involved. The picture above is a mare who was so starved that she could not stand on her own.

How did the county know about this,  on August 26th they received a complaint from a concerned citizen regarding "starving horses." Since Calaveras County takes such calls very seriously, they responded immediately and found the dying horses.

Two mares and two foals who were thought to be in the most critical condition and were seized right then and there. As for the others, because of the sheer numbers, plans had to be made to get them out of there. No, it's wasn't simply a matter of talking to the owner about a horse that looks underfed, these animals were all removed as soon as the county could get them out of there.

Because of something so appalling, a hearing had to take place to get authorization from an administrative judge to remove all of the animals. When it came time to remove them, as a report stated, "One of the emaciated mothers had to be raised onto her hooves using straps and a tractor, with the help of Calaveras Consolidated Fire Protection District (Cal-Co Fire)."

Efforts to transport the horses was hampered by the horses having very little contact with humans. In fact, one official said, "It has been very trying to say the least. The horses are not just under-socialized, they’re somewhat wild because they haven’t had a lot of human interaction."

The same official reported that one of the mares was later euthanized. A necropsy was performed on that mare in order to collect evidence as criminal charges with the Calaveras County District Attorney’s Office are being sought.  The surviving horses, which include stallions, nursing mothers and foals, are also being held as evidence and are being cared for at an undisclosed location.

Officials say it may take several months or more to determine the next steps for the horses.

I have absolutely no respect for some people, if you've read my blog long enough then you know that I have zero respect for child molesters, rapists, bigots, anti-Americans, and the leaches that prey on others. But along with them are folks who abuse animals, especially horses. Recently, Calaveras County Animal Services and assisting agencies gathered up emaciated and dying stallions, mares, nursing mothers and foals, mules, and a few donkeys in Valley Springs, California.

In Calaveras County, California, we are a little over a thousand miles in size and only have a population close to 46,000 people. People around the country may be shocked to find out that an entire county in California has such a small population, especially when compared to say San Francisco County which the has a resident population of over 880,000 people in an area only 47 square miles in size. And think about this, San Francisco County swells to more than half of its official population during any given work day since there are thousands of people who work there that commute into that city.

What am I getting at? Calaveras County is where I live, and this is rural America. Giving an owner the benefit of doubt, I understand how money restraints can make feeding horses a problem to overcome. I understand how people can get in over their heads. But frankly, I expect better out of people who live here -- certainly better than I do from the likes of people who live in the congested liberal shithole of San Francisco. Maybe that's why my hearing about people allowing their animals to starve offends me so much. There is never an excuse to let any animal starve.

Today, there are horse rescues. Today, there are agencies and groups that can help owners in trouble and take horses away. In most cases, those horses find a long term home with someone like me who doesn't mind taking in a few rescues. Of course, there are places that are long term rescues themselves that are great when an owner needs that option. The point is that today, there are options and horses don't have to be starved. What that means is that there's no excuse for it.