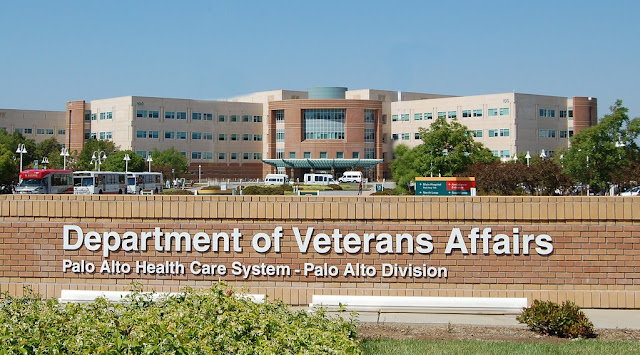 My wife is Deanna is supposed to be covered by CHAMP VA. Though that's what we thought was the case, she was turned away and refused treatment at the Emergency Room at the VA Hospital in Palo Alto, California, recently.

On August 4th, I took my wife to Sutter-Amador Hospital in Jackson, about a half-hour from where I live here in California. She was diagnosed as having gallstone problems. Before leaving the emergency room, the treating physician told us to arrange a follow-up as soon as possible. The next day, we called for a follow up appointment as we were instructed. The people at Sutter-Amador Hospital said that they could see her on August 29th. Yes, 25 days later. Image that. She was in moderate to severe pain, yet they wanted her to wait 25 days before a follow-up appointment.

Since my wife has medical coverage through me with the VA, covered by CHAMP VA, we made an appointment with her doctor to see her. The VA Clinic in Modesto scheduled her on the 14th. So OK, it was still 10 days later -- but it was better than nothing. Besides, I decided that if she were in excruciating pain as she was before going to the ER, then I'd rush her back to the ER at Sutter-Amador Hospital in Jackson again since it is the closest ER to where we live.

On August 14th, we went to her appointment at the VA Clinic in Modesto. We had to be there by 11 a.m., but a logging truck got in front of us and we ended up arriving 10 minutes late for her appointment. I figured the VA would refuse to see her since we were 10 minutes late, but I was surprised that they did.

During her visit, the Chinese doctor who was attending to my wife seemed to have a hard time understanding English and actually had to call a nurse in to help translate what was going on with my wife. It soon became very apparent that the doctor and nurse were not concerned about my wife’s symptoms, but instead were concerned more about her CHAMP VA coverage.

Because my wife was scared to eat anything that would create pain, my wife was not eating and had lost 10 pounds in 10 days. Yes, she lost 10 pounds from when first she was seen at the ER in Jackson on August 4th to when she was weighed in at the VA in Modesto on August 14th.

The doctor at the VA Modesto Clinic told us that my wife needed to get to the Emergency Room at the VA Hospital in Palo Alto. That is the main hospital in the VA Palo Alto healthcare system.

Because the people at the VA Clinic in Modesto said my wife needed to get to a VA emergency room, we immediately drove the three hours to the VA Hospital in Palo Alto. We arrived there at a little after 3 p.m., and by 5 p.m. the VA emergency room staff took her in to get an ultrasound exam. After that we waited. Even though they found gallstones, and suspected that one stone was in the bile duct leading to her large intestines and was responsible for creating the pain she was feeling, they refused to treat her.

While what they did was a clear case of "patient dumping," they said they were sending her somewhere else because they didn't recognize her coverage. Yes, even though her insurance coverage was through the VA.

It didn't matter. As far as they were concerned, she didn't have coverage and they weren't going to treat her -- no matter what condition she was in.

Just so you know, in California, "patient dumping" is supposedly illegal. Patient dumping is the practice of hospitals and emergency services not treating patients who they see as unable to pay for treatment.

After midnight, we left the VA Hospital in Palo Alto. That was after being in their ER for almost 10 hours. At 1 a.m., we arrived at Stanford ValleyCare Hospital in Pleasanton -- a little under an hour away from the VA Palo Alto Hospital.

The people at Stanford ValleyCare Hospital in Pleasanton were 180 degrees different than the treatment at the VA in Modesto and Palo Alto emergency room. They immediately admitted my wife. While they had a bed for her, I refused to leave her and simply slept in a chair.

Later that morning, Stanford ValleyCare Hospital in Pleasanton ran tests on my wife. A team of doctors came in to talk about removing my wife's gallbladder, and the blockage in the bile duct leading to her intestines. I was advised that her medical coverage was not an issue to being treated and that she was in good hands. I was also advised "even if she had absolutely no coverage, it is illegal to refuse treatment to her."

By that afternoon, she went into surgery. Later that day, after a few hours in surgery, she was returned to her room. She was out most of the day. Again, that night, I refused to leave her side and simply slept in a chair.

My wife was discharged on Friday afternoon after her surgeons came in to check on her. The people at Stanford ValleyCare Hospital in Pleasanton, California, are really top-notch folks. They are extremely professional, but also personable and caring.

I want to take a minute here to thank Surgeons Dr. Andrew Lee who removed my wife's gallbladder and Dr. Christopher Enwisle who was the specialist who was called in to get the stone blocking the duct to my wife's intestines. These two men are great surgeons and need to be complimented on their compassion and wonderful way with a patient like my wife who was very scared of what was taking place. They were certainly a comfort, truly Godsends.

Over the last week, she has been recuperating. And as for medical coverage for her, we are looking for coverage that will be honored. If we can help it, we will be relying a lot less on the VA for her coverage in the future. The VA simply doesn't care enough about family members of veterans.

As I told my wife after this was all said and done, I've been with the VA since 1995 and have had great care and lousy care in the past. While shoddy medical treatment for me is one thing, I don't want that for her. We are presently looking for medical coverage for her.

I first published what took place with my wife in another post. Since my publishing this incident, many of my readers are writing to ask what they should do?

My advice to the thousands of people who read my blog, you who are covered by CHAMP VA, is to find other coverage because the VA does not recognize CHAMP VA and will refuse treating you -- even if it's an emergency. The VA will not be there for you when you need them.