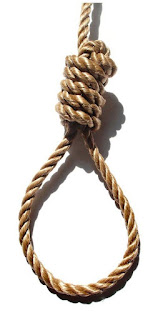 To my knowledge, no one really knows how old John J. Hoover was when he was hanged on April 28th, 1880, in Fairplay, Colorado. All we really know about the man was that he was a billiard parlor owner who was hanged by vigilantes after being given a lenient sentence in court. He was convicted of manslaughter for the unprovoked murder of a hotel clerk who he didn't even know.

The gold mining town of Fairplay was founded in 1859 during the early days of the Pike's Peak Gold Rush. Though gold was discovered there 1859, the initial discovery was not rich enough to cause a whole lot of excitement. In 1860, another strike was made in that area. Within a few months, the town and surrounding area had a population of 10,000. The town of Fairplay was actually incorporated into a town in 1872. As of 2010, the population of the town was 679. So no, growth was never sustained there.


John J. Hoover was known to have been a prospector in the California Gold Rush in the 1850s and was one of Fairplay's older residents who is said to have arrived there in the late 1860s. Other sources say he arrived in Fairplay in the 1870s. While most reports can't seem to agree on when he arrived, most do say Hoover owned the Cabinet Billiard Parlor, and that he was known as a cantankerous individual who was one of those who simply got meaner the more liquor he consumed.

On April 1st, 1879, he stormed into the Fairplay House Hotel and shot the hotel clerk Thomas M. Bennett who was waiting on customers at the counter. After shooting Bennett, Hoover told the dying man that he was taking over the hotel. Hoover actually told Bennett that he was the new owner. Of course, Hoover didn't own the hotel and no one knows what sort of delusional thinking came over Hoover. Frankly, no one ever found out why he shot Bennett.

When the dying Bennett was asked what could have provoked Hoover to shoot him, Bennett is reported to have answered, "No, no, no, oh, my God, he did it in cold blood."

A few days before being murdered, McLair supposedly told Bennett to clean out a ditch opposite the hotel. The ditch was running over and flowing into Hoover's Cabinet Billiard Parlor. Hoover had complained about the ditch before. Bennett worked at cleaning it and then returned to his usual duties at the hotel desk.

It was reported that at about two o'clock that afternoon Hoover left the Cabinet Billiard Parlor. Hoover had been drinking and decided to walk down the street to the office of the hotel. There he found Bennett looking at the hotel register. Hoover immediately drew a pistol and said, "I own that house and lot, and I'm not going to have any family imposed upon."

While Hoover pointed a revolver at his face, Bennett pleaded with Hoover saying, "Hold on, I don't want any trouble, nor I don't want to impose on anyone... "

Hoover shot him. As Bennett fell forward on the counter, Hoover covered him with his pistol and was about to fire again. But one of the boarders stepped forward, and knocked Hoover's arm up saying "For God's sake don't shoot him again."

It was then that the dining room girls opened the door and looked in. Hoover turned his pistol on them and ordered them back.

It's said that when Bennett had fallen to the floor, Hoover said to him: "Get up there, God d- - m you!"

Hoover was told to leave him alone, and with that, he walked up town to his wife who came out of their home nearby. She talked him into giving up to the Sheriff and he was arrested.

Hoover's defense plead "temporary insanity" based on an injury that he had supposedly received in a  mining accident in the mining town of Oro City, Colorado in 1871. Oro City, which is now just a ghost town, was a mining town located near Leadville, Colorado. Hoover said he had "fallen sixty-five feet down a mine-shaft" while working there. He also told authorities that the injury that he sustained from that mining accident caused him to have "temporary fits of insanity."

Hoover said that he could produce witnesses to the accident in Oro City, but none were ever produced. As for checking any sort of journal documentation, or newspaper articles noting the accident, none were found. This in itself made people suspect Hoover's honesty considering that almost everything was chronicled in one way or another by someone.

Yes, he got eight years for killing a man in cold blood. But there's more, his sentence was reduced by one year because of his plea of manslaughter. Then, to the surprise of all there, a second-year was credited for time already served while awaiting trial. So now, he was looking at getting off with a six-year sentence for killing Thomas M. Bennett.

Was he going to get away with murder? Yes, he was. That is until the citizenry got involved.

On April 28, 1880, John J. Hoover was going to be transported to the Colorado State Penitentiary in Canon City. The citizens had other ideas on what to do with him. Early that morning, anywhere from twenty to twenty-five citizens wearing masks and disguising their voices broke into the jail in the courthouse in Fairplay.

Because of the public's reaction to the light sentence, the Sheriff thought it best to place two guards in the courthouse. They were there until two o'clock in the morning. That's when guards heard pounding on the courthouse doors demanding to be let in. Then soon the doors were forced open and twenty to twenty-five citizens were there to break the cell lock off using hammers they brought with them.

Hoover is said to have put up a struggle. He supposedly cried out, "Must I die like a dog!"

To that, a citizen replied, "Bennett died like a dog."

Hoover begged and pleaded, but then the citizens gagged him. They then quickly moved him to the front steps of the courthouse. A rope was run out of the second-story window of the courthouse and directly over the steps. A minute later, Hoover was hanging there lifeless.

One guard stated later, "I was one of the guards on duty at the county jail. About two minutes after three o'clock of the morning of the 28th a body of men came to the Sheriff's office and demanded entrance. I asked them what they wanted, and they told me to open the door. When I opened the door I found five or six masked men with revolvers. They demanded our arms. We gave them our arms and they walked out and told us to remain there, which we did. They came back in a few minutes and demanded the keys to the jail, and I told them I did not have them, the next thing I heard was a noise by which I was satisfied they were trying to break in the outer jail door, which they did. Then next we heard they were on the stairs leading up to the courthouse after the crowd left in about ten minutes, but just before they left they put our arms on the floor and we followed them out and found Hoover hanging from the front window. After the mob was away about fifty yards we fired four shots to raise an alarm. As they walked out they shook Hoover and he appeared to be dead. Then I proceeded after the Sheriff."

The citizens considered Hoover's six-year sentence a slap in the face. Too lenient a punishment for such a heinous act. Those same citizens pulled a screaming Hoover from his cell and hanged him from a second-floor window. Yes, a second-floor window right over the front steps of the courthouse. By the time the sheriff arrived, it was all over. He found Hoover hanged and everyone responsible disappeared.

Later, the Sheriff claimed that he could not identify nor locate any of those responsible for hanging Hoover. Some later wondered aloud if the Sheriff and the guards empathized with the frustrations of the citizens since the Judge and District Attorney were both known as being too lenient on criminals.

Both the Judge and the District Attorney decided to leave town right after that. It's said they saw the writing on the wall. Feeling fearful that the same citizens may deal with them for handing out light sentences in a similar manner as they did with Hoover, they felt it safer to get away while they still could. Imagine that.