I Have Seen The Elephant 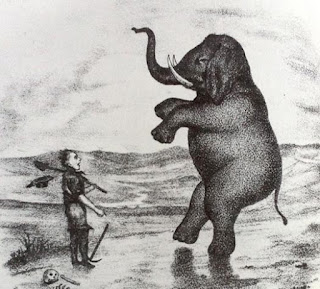 
White elephants are actually albino elephants. In some parts of the world such as Asian countries, they were regarded as "Holy" or Sacred" in ancient times. They are expensive since the owner had to provide it special food. They were also a bother in that the owners had to provide access for people who wanted to worship it.

Because the care and feeding of a sacred elephant was so expensive, and since that is exempt from work, owning a white elephant was seen as less than desirable. In fact, this was so much the case, that it's said if a Thai King became dissatisfied with a subordinate in his court, he would give him a white elephant. The gift would was meant to lead to that person's ruin.

According to sources, the first reference in English to the idiomatic meaning of the term "white elephant" came in the G. E. Jewbury's Letters dated 1851, which said, "His services are like so many white elephants, of which nobody can make use, and yet that drain one's gratitude, if indeed one does not feel bankrupt."

While white elephants were seen as burdensome, even back in the Old West, among some of the more colorful saying back then was the popular phrase "I have seen the elephant." It was a phrase that referred to overcoming life's hardships.

Supposedly, the saying stems from a story about a farmer and a circus. The story revolves around his traveling to see the circus, specifically an elephant. In fact, since he had never seen an elephant in person, his curiosity pushed him to head to town to see one.

At the sight of the elephant, the farmer's horse got excited. Of course, today we know that elephants make a sound known as a trumpet. They do this to signal excitement, aggression, distress, or calling to their mates. It's said that a trumpeting elephant can be heard up to six miles away.

Immigrants making the arduous journey to California during the 1849 Gold Rush came over land or by sea. Whether it was those who lived to tell about making it around the treacherous seas of Cape Horn, or those who told of walked across burning prairies and rugged mountains, it was common to hear them say with pride, that they "had seen the elephant, from the tip of his trunk to the end of his tail" by the time they arrived in California.

Of course, as with other adventurers, the newcomers to California's mining camps would write home to their families back East and tell harrowing tales of how they too came to see the elephant for themselves. And believe it or not, the term also meant finding adventure. Some would see the elephant in a few White Elephant Saloons that appeared here and there.

One very famous White Elephant Saloon was in Fort Worth, Texas. It opened to the public February 29th, 1884. It was said to be a gambling house and saloon frequented by many who are today legends of the Old West. Maybe at the time, not so much, but today Bat Masterson, Luke Short, "Longhaired Jim" Courtright, Charles Coe, would surely be considered legends

On the leap year day, a friday, the Fort Worth Daily Gazette reported, "The gorgeous magnificence of an Eastern palace exceeds the wildest flight of the most vivid imagination." The report went on to say, it was the "finest saloon outside the city of New York."

Fort Worth's White Elephant Saloon was located at 308 Main Street, and was described as "the most gorgeously gotten-up affair of the kind in the state." Downstairs, the pleasure palace had a forty-foot-long bar of mahogany and onyx, cut-glass chandeliers, gas light, what was said to be the best food, drink, and smokes in the city. Upstairs it had tables for faro, keno, monte, roulette, and poker. All gambling was purported as honest and above board.

In contrast to the opulence of Fort Worth's White Elephant Saloon, in January of 1884, 36 year-old Wyatt Earp with his "wife" Josie and his oldest brother James opened The White Elephant Saloon & Dance Hall in the booming gold and silver mining town of Eagle City, Idaho. They arrived in northern Idaho for the Coeur d'Alene Gold Rush.

In 1881, Eagle City became the first mining camp to spring up after Andrew Prichard discovered gold in a creek that flowed into the north fork of the Coeur D'Alene River. The Earps are said to have found a flat spot where a small creek ran into Eagle Gulch. Miners cabins and tents filled the area and the Earps saw easy pickings.

Believe it or not, the Earps purchased a round circus tent that was 45 feet high and 50 feet in diameter for $2,250. It was there that they started their version of the White Elephant Saloon. As was the Earp luck, Eagle City was actually short lived. They left Eagle City in early 1885 when everyone else was vacating the area because the gold petered out fairly quickly. Eagle City turned into a ghost town, the White Elephant Saloon and all. There were just a few hangers-on from the thousands of miners that were there during the boom.

To take its place was the town of Murray which prospered by 1885 and became the Shoshone County seat. Murray's better all-around location up the creek from Eagle City, while it endured even after their boom went bust, it's population is only about 50 or 60 today.

While the Fort Worth's White Elephant prospered and changed hands over a century or more, its building and status fluctuating over the decades that it's been there, Earp's White Elephant was fairly short lived. Not even a year by most accounts. As for Wyatt Earp leaving that area, it was later found out that he was accused of claim jumping. Some say it was just a vicious rumor started by someone who had a grudge against him over a bad real estate deal, others say it was par for Wyatt Earp.

Wyatt Earp, always the self-promoter, took out an advertisement in the Coeur d'Alene Weekly calling his White Elephant Saloon, "The largest and finest saloon in the Coeur d'Alenes." He also took out an advertisement in a local newspaper which suggested that brave men "come and see the elephant," knowing that "to see the elephant" spoke to the adventurer in all of us.