No One Is Above Or Below The Law 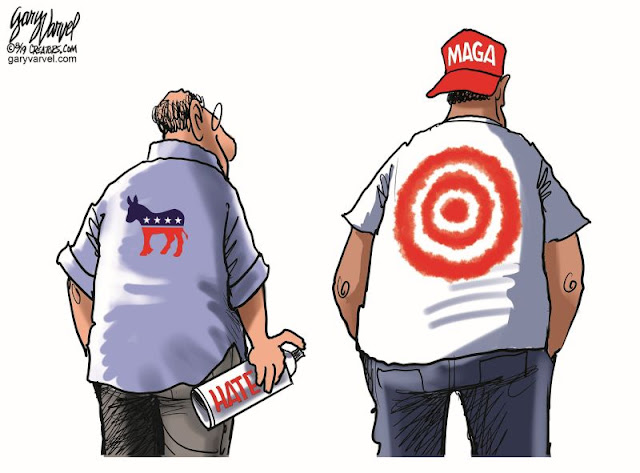 I get a lot of email asking why Democrats hate President Trump, and by extension Trump Supporters like me. I usually write back saying my pat answer, "Consider the source of the hate." Those who hate him do so with zero rational. And frankly, facts that combat their misconceptions or false information about him won't change their minds. They hate him that deeply even though there might not be a rational explanation to their hate. Of course, Democrats send me a lot of hate mail and threats in response to me providing them with information that goes against their misconceptions.

Democrat's failed to impeach President Trump over the Mueller Report because there was no evidence of wrongdoing on the part of the President. Some might not want to hear that, but it all came down to when Robert Mueller issued a clarification of something he said during a morning hearing. It had to do with his decision-making process when it came to the question of whether President Trump committed obstruction of justice. Yes, that was when the Democrats hopes of impeaching President Trump over the Mueller Report came crashing down.

It took place when Mueller had an exchange with Rep. Ted Lieu who is a Democrat from California. Lieu asked, "The reason that you did not indict the president is because of the OLC [Office of Law Counsel] opinion that you cannot indict a sitting president, correct?"

Mueller impulsively replied, "Correct." With that answer, he gave Democrats the impression that if Mueller was not hamstrung by the OLC/DOJ policy, that he would have charged the president. Democrats left on a break with glee that they can get the President. All they had to do is over-ride the OLC/DOJ policy to impeach the President. All they had to do was get the evidence that Mueller had.

But then, that afternoon, Mueller sat down to immediately issue a correction. His correction was made to change the record to show that was not what he meant to say at all. Yes, he issued a correction to the misconception. There was no evidence of misconduct on the part of the president.

Yes, that afternoon, Mueller returned to open up his testimony by clarifying his statement to Lieu. Mueller said, "I want to add one correction to my testimony this morning. I want to go back to one thing that was said this morning by Mr. Lieu, who said and I quote, ‘You didn’t charge the President because of the OLC opinion. That is not the correct way to say it. As we say in the report and as I said at the opening, we did not reach a determination as to whether the President committed a crime."

When I was studying law, the idea that there simply wasn’t evidence of a crime meant that the person under investigation is not guilty, innocent, because of the lack of evidence. If any prosecutor said what Mueller said in that “we did not reach a determination as to whether so-and-so committed a crime”, then that means there is no evidence to charge so-and-so with a crime. In our legal system, beings that "the presumption of innocence is on the accused," the accused is innocent and did not do anything to be charged. That’s the way it is for all of us, presidents also. President Trump also.

As for the idea that a president cannot be charged with a crime because of some policy? That's nonsense!

While the president should have the same legal protections as every American citizen, he does not have extra protections because of his position.

Constitutional law overrides the Office of Law Counsel policy that has been in place for years.

We have a saying in the United States, "no evidence no crime." A determination was made not to charge the president because the Mueller team could not find the evidence needed to charge him. Evidence is the key. If there was evidence, Trump, or anyone else they had evidence on, would have been charged. That’s our legal system. That's how it is supposed to work.

Corpus delicti (Latin: "body of the crime") is a term from Western jurisprudence referring to the principle that a crime must be proved to have occurred before a person can be convicted of committing that crime.

For example, a person cannot be tried for larceny unless it can be proven that property has been stolen. Likewise, in order for a person to be tried for arson it must be proven that a criminal act resulted in the burning of a property. Black's Law Dictionary (6th ed.) defines "corpus delicti" as: "the fact of a crime having been actually committed". … per Wikipedia.

This is essential to our legal system so that we do not charge innocent people with crimes they did not commit. Sorry if you disagree, but that’s the way it is here.

If the evidence that the prosecutor used to bring someone to trail does not hold up to a jury's scrutiny, then the defendant will be deemed not guilty. That’s why a good prosecutor makes sure the evidence can prove beyond a doubt that someone is guilty.

Prosecutors will not try a case that has zero evidence. Also, in the United States, we are presumed innocent until proven guilt.

If there was evidence of wrongdoing by Trump, Mueller who was the prosecutor in this case would have brought charges against Trump. And as I said before, "no evidence no crime." Whether you like it or not, that’s how we do things in America to stop from convicting innocent people.

Also, ask yourself this, what makes you think that Mueller would not have charged the president with a crime if his team found the evidence to do so? Remember, Mueller testified that his team charged over 30 people with crimes because they found evidence of crimes — most not related to the whole Russian hoax.

As for you who are writing to tell me that you Democrats have Trump this time over the Ukraine phone call where President Trump asked the Ukrainian president about former-Vice President Joe Biden's involvement in getting a Ukrainian official fired. It doesn't matter that there is nothing in the law that forbids the president, or you and I, to ask such questions during a conversation. Many Democrats have twisted the truth of what that conversation entailed and are now saying that Trump must have been "extorting" information -- even though there is no evidence of any such thing taking place and the Ukrainian president himself said there was nothing improper said during their conversation.

But the facts do not matter since Democrats have worked from Day One of the Trump administration to find something that President Trump has done to warrant impeachment. No matter what the cost to our nation. No matter how it divides our nation. No matter if it's completely false and fabricated for nefarious reasons. As sad as that is, that is the only thing that Congressional Democrat have done since Donald Trump entered the White House.

Democrats have failed to address concerns over national security, border security, modern day slave trade on the border, child sex trafficking on the border, children in bondage, street drugs and illegal aliens pouring across the border, sanctuary cities which are seeing an increase in violence, the overflow of homeless in Democrat controlled cities, the filth in some cities causing illness and disease control which were almost none existent, and more.

Their focus in only on fabricating crimes and charges, making them up if they can to impeach President Trump. While they repeat their mantra that "No one is above the law" in their desire to find something to charge him with, they ignore the fact that as an American citizen -- President Trump is not below the law either. That means he must be afforded the same rights and protections that all Americans have a right to. Whether Democrats like it or not, President Trump should be protected against being publicly lynched over trumped up charges.

President Trump should not have to face such a savage lynch mob mentality which the Democrats have today.