A Short Summary About Tom Horn 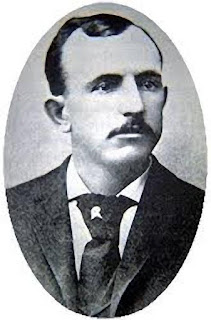 Allow me to answer a question or two from a reader regarding Tom Horn. My reader wants to know if I've ever written about Tom Horn, do I think he shot the boy, and was he essentially railroaded by the Wyoming Stock Growers Association?

First of all, I have written about Tom Horn. That was a few years when I decided to write about what I had found out about him. So where is that article? Well I'm sorry to say that I needed it for my upcoming book, so I pulled it off of my blog. In my book, I go into it a lot more than I'm about to -- but here we go.

As for Horn shooting young Willie Nickell? I believe that he did do it. That's just my opinion based on what I've researched. In fact, since the boy was shot twice, I really believe Horn shot the boy both times. Once off his horse and once while the boy was trying to crawl to safety.

As for people saying that he was "a big kid for his age" and "he was wearing his father's coat and hat." Let's be really clear on something, being big for your age or wearing your dad's coat isn't an excuse for murdering someone. Murder is murder. Horn waited and found his opportunity. He then took his shot. He was intending on killing someone that day, just so happens it was Kels Nickell's son Willie.

And by the way, if memory serves me right since I don't have my notes in front of me, I believe it was a week or so later that Horn actually tried to ambush Kels Nickell for a second time. You would think that after killing his son, that Horn would have laid off of Nickell. But that wasn't the case. Horn shot Kels Nickell, but failed to kill him.

I find it interesting that people assume that Kels Nickell was a new arrival to the area since he was a homesteader. Actually, he was in the Iron Mountain area of Wyoming a couple of years before John Coble. Just for the record, Coble turned out to be a crooked partner of Pennsylvania capitalist Henry C. Bosler who owned the Iron Mountain Ranch company with its headquarters at Bosler, Wyoming.

Kels Nickell was a homesteader, actually a sheep rancher. Coble objected when Nickell wanted to bring in sheep. There was a lot of tension between the two. In fact, there was an incident that was later reported as follows:

"A meeting of cattlemen was held, and Coble attempted to organize a raid to drive Nickel and his sheep out of the county. Nickel and Coble met at the Iron Mountain railway station one day following the meeting, and Nickel, having been advised of Coble's plan, took him to task.

Coble attempted to draw his gun, but Nickel plunged a bowie knife into the cattleman's stomach before Coble could get his sixshooter into play.

For this, Coble threatened "to get" Nickel, and soon after Coble left the hospital, Tom Horn, a notorious southwest range fighter, made his appearance at the Iron Mountain ranch. Horn warned Nickel of instant death if he did not leave the country. But Nickel was game, and remained.

One day as he was hauling logs from the hills, Horn appeared and opened fire on the sheepman. Nickel ran, and escaped to his home with a shattered elbow. A week later, Willie Nickel was shot and killed near the Nickel ranch, and Horn in his confession to Joe LaFors, the detective who ran him down, said he was laying for old man Nickel, when the boy appeared, and he had to kill him to prevent spreading alarm."

To answer the question if I think Tom Horn was "railroaded" by the Wyoming Stock Growers Association as in the movie "Tom Horn" starring Steve McQueen eluded to? For me, again this is just my opinion after looking at the evidence available, I really don't believe that was the case for a number of reasons.

Everyone there at the time knew that Tom Horn worked for John Coble as a stock detective, also known as a range detective. That was not a big secret to anyone there. As for authentic stock detectives, they went after rustlers and brought them to justice. Being a stock detective was a legitimate profession that actually supplemented the law in cattle country. Ranchers often hired their own people to look into who is doing the rustling to try to stop the lost of expensive property. Sometimes, I get the impression from my email that people forget that cattle are property. That's what cattle are. They are property. Subsequently, a loss of property can mean the life or death of a ranch.

In the Old West, many a stock detective, also called a range detective, was hired on from the ranks of former lawmen, mine guards, shotgun riders, and others with skills in finding rustlers. They were hired to stop rustling. Not kill rustlers, but to bring them to justice.

Today, we have the evolution of stock detectives in the form of brand inspectors. Take for example the state of California today. In this state, the state’s brand registration and inspection program protects cattle owners against loss of animals by theft, straying, or misappropriation. Brand inspectors inspect cattle for lawful possession prior to movement, sale or slaughter, and recording of the information obtained by such inspections. They also assist local law enforcement with investigations and prosecutions involving cattle theft.

Friends, the same thing was taking place in the Old West in the form of stock detectives. A stock detective's job was to ensure that the people in possession of the stock were actually the legal owners. Yes, no different than today's brand inspectors. Of course back in the day when computers were non-existent, a stock detective had to be able to recognize a dozens or more brands.

As for branding cattle, the old saying still applies, "Trust your neighbors, but brand your stock." A "slick" is still an unbranded animal that is very hard to legally identify. And as for "running irons" used by rustlers to alter brands, just having a "running iron" would get a person hanged in the Old West -- depending on the mood of those who discovered it. Tar and feathers worked well to discourage some back then.

Few if any were "stock detectives" like Tom Horn. Most were good range detectives just doing their job to prevent stealing and tracking those down those that did the stealing. Their goal was prevention, recovery, apprehension, and prosecution. Tom Horn was a killer. He was in fact a hired gun. He got a bounty for those he killed in the name of stopping rustlers. Whether they were actually rustlers or not, he got paid.

If Horn was "railroaded," then why was it no secret to everyone in Wyoming at the time that Horn worked for the Wyoming Stock Growers Association (WSGA), specially John Coble? It was also not a secret that WSGA kicked in a lot of money to pay for the best legal team that money could buy to get Horn off after he was charged. People attempting to railroad people don't spend their money to help them.

And also, between the WSGA and John Coble stealing money from capitalist Henry C. Bosler in the way of using the operating funds of his Iron Mountain Ranch company to finance Horn's legal team, Horn's legal team was top notch. And if memory serves me right, one of his lawyers was a former territorial governor.

Frankly, I believe what got Tom Horn hanged was Tom Horn's mouth. Tom Horn was extremely talkative. This actually hurt him in two ways. First, when the Deputy U.S. Marshal Joe LaFors was looking into the killing, he interviewed Horn and a number of others. No, not just Horn. During his initial talk with Horn, Horn talked too much.

The second part of how Tom Horn's talkative nature hurt him, really had to do with Horn's own conduct in court during his trial. Seriously, if their letters and such are accurate, Horn's legal team couldn't get him to shut up -- especially when Horn took the witness stand.

After the trial, members of his legal team wrote about how they believed Horn's own testimony on the stand is what really did him in. He refused council and almost bragged about committing the deed while people in the courtroom listened and let him talk. And no, the trial was not held outside in a tent. I believe it was on the third floor of the courthouse in Cheyenne.

There are a number of myths attached to Tom Horn. One is the myth about the water operated gallows. In the movie, Tom Horn, the film says that the water gallows was specially built to hang him since they could not find anyone to pull the lever and drop him. Fact is, that type of gallows was in operation for more than 10 years before Horn was ever hung.

As for no one wanting to pull the lever? That was false. There were a lot of homesteaders who wanted to hang him. If for anything else, simply because he terrorized people in an attempt to drive them out. As for the most vocal person who wanted to pull the lever to drop him, that was Kels Nickell who lost his son and he himself was shot by Horn.

Kels Nickell was there when Horn was hanged. He was brought over to see Horn's body in private before they carted Horn away. Since Horn strangled to death, his face was blue and Kels Nickell is said to have nodded in the affirmative that justice had been done.

Also, some folks think that the people there were sorry to see him die. That's not the truth either. Let's keep in mind that Horn was not as popular as people today seem to think. He was seen as a child killer. And as for people disliking him, keep in mind that when he was being escorted back to jail after his attempted escape, people there at the time wanted to lynch him on the spot.

As for the myth that Tom Horn was a loyal and reliable hired gun, a killer who never implicated his employers? Really? Everyone in the area knew that he worked as a hired gun for John Coble. Everyone also knew that Coble and the WSGA paid big money for his legal defense. Some say Coble spent over $100,000 on Horn's defense. Friends, $100,000 in 1903 is equivalent in purchasing power to about $2,915,579.55 in 2019.

And there's something else, some say Horn kept his mouth shut thinking that the very wealthy and very politically connected WSGA and his friend Coble would find a way to get him a pardon or a reduced sentence. Some say that's why he didn't implicate John Coble who Horn took orders from.

Others say Horn didn't cut a deal for leniency by implicating John Coble for the simple reason that if he had -- then his own life wouldn't have been worth a plug nickel. To me, even if he tried to get a reduced sentence by implicating Coble or another in the killing of Willie Nickell, I think Horn must have known that would have been futile. Horn was seen as a child killer, and the people were going to hang him for that. They weren't going to let him have life in prison for killing a child.