Some of America's Great Banned Books - Part One The Library of Congress created an exhibit, "Banned Books that Shaped America," that explores books that "have had a profound effect on American life" yet have been banned in one way or another.

Below are some of my favorites from the list of books from that exhibit that have been banned or has had its language or content challenged.

One of the very interesting part of this is that some of these works are considered some of America's greatest literary treasures.

These are not all of the banned books from that exhibit listed, these are just my personal favorites which I found to be great reads.

And yes, these are books that I have read. Why did I repeat that? Well, for a person who has a hard time getting through a novel because they lose my interest - my saying that is a big deal to me.

Something written really has to hold on to my interest for me to get through, that is the reason I love Short Stories instead of Novels.

Warning! The titles of what has been banned might surprise you.

Commonly named among the Great American Novels, the work is among the first in major American literature to be written throughout in vernacular English, characterized by local color regionalism.

It is told in the first person by Huckleberry "Huck" Finn, a friend of Tom Sawyer and narrator of two other Twain novels (Tom Sawyer Abroad and Tom Sawyer, Detective).

It is a direct sequel to The Adventures of Tom Sawyer.

And by the way, as an interesting side note, Twain named his fictional character Tom Sawyer after a San Francisco fireman whom he met in June 1863.

The real Tom Sawyer was a local hero, famous for rescuing 90 passengers after a shipwreck.

The two remained friendly during Twain's three-year stay in San Francisco, often drinking and gambling together

The Adventures of Huckleberry Finn is noted for its colorful description of people and places along the Mississippi River during the mid 1800s.

Set in a Southern antebellum society that had ceased to exist about twenty years before the work was published, Adventures of Huckleberry Finn is an often scathing satire on entrenched attitudes - particularly racism.

The Adventures of Huckleberry Finn was criticized upon release because of what some called "coarse" language and became even more controversial in the 20th century because of its perceived use of racial stereotypes.

That was mostly due to its frequent use of the 19th century colloquialism "nigger".

Of course, this was all despite the many who still argue that the protagonist in the story as well as the tenor of the book is in reality anti-racist.

Because of the language, the first ban of Mark Twain’s American Classic came in 1885 from the same stiff neck folks who burned witches up there in Massachusetts.

Someone who's name is now completely forgotten even called it "trash and suitable only for the slums."

Objections to the book have evolved, but only marginally. Some hate literature that doesn't lie while others enjoy perpetuating the lie.

The Adventures of Huckleberry Finn does not lie. It tells us how things really were.

Twain’s book is one of the most-challenged of all time and is frequently challenged even today because of its frequent use of the word "nigger" - which was not a word looked upon as something taboo in the 1800s.

Those who want it banned allege the book is "racially insensitive," "oppressive," and "perpetuates racism" - when in fact it fights racism by telling the truth about what too place.

Gone With the Wind, Margaret Mitchell, 1936

Slavery in Gone with the Wind is a backdrop to a story that is essentially about other things.

Southern plantation fiction (also known as Anti-Tom literature) from the early 19th century - culminating in Gone With the Wind - is written from the perspective and values of the slaveholder and tends to present slaves as docile and happy.

The characters in the novel are organized into two basic groups along class lines: the white planter class, such as Scarlett and Ashley, and the black house servant class.

The slaves depicted in Gone with the Wind are primarily loyal house servants, such as Mammy, Pork, Prissy, and Uncle Peter.

House servants are the highest "caste" in Mitchell's caste system of the slaves. They stay on with their masters after the Emancipation Proclamation of 1863 and subsequent Thirteenth Amendment of 1865 sets them free.

Of the servants that stayed on at Tara, Scarlett thinks to herself, "There were qualities of loyalty and tirelessness and love in them that no strain could break, no money could buy."

One criticism leveled at Gone with the Wind is for its portrayal of African Americans in the 19th century South.

Former field hands during the early days of Reconstruction are described behaving "as creatures of small intelligence might naturally be expected to do. Like monkeys or small children turned loose among treasured objects whose value is beyond their comprehension, they ran wild—either from perverse pleasure in destruction or simply because of their ignorance."

For me, why read a lie about how it was in the South before or after the Civil War. If I want to know how slaves were looked upon - why should I go to some work which as been cleansed and sanitized so not to offend someone.

Gone With The Wind is a Pulitzer-prize winning novel which follows the life of the spoiled daughter of a Southern plantation owner just before and then after the fall of the Confederacy and decline of the South in the aftermath of the Civil War.

Just three years after its publication, it became an Academy-Award Winning film. Today, it considered one of the best films ever made - a true classic.

Critically praised for its thought-provoking and realistic depiction of ante- and post-bellum life in the South, it has also been banned for more or less the same reasons.

Its realism has come under fire, specifically its realistic portrayal – though at times perhaps tending toward optimistic - of slavery and use of the words “nigger” and “darkies.”

It was banned from the Anaheim, California Union High School District’s English classrooms in 1978, according to the Anaheim Secondary Teachers Association, for its depiction of the behavior of Scarlett O’Hara and the freed slaves in the novel.

It was also challenged in the Waukegan, Illinois School District in 1984 because of the novel’s above-mentioned use of the word “nigger.”

Like Huck Finn, and Gone With the Wind, the contextual, historically and culturally accurate depiction of the treatment of black slaves in the United States has rankled would-be censors.

It is said that the impact of Uncle Tom’s Cabin was tantamount to its popularity as the second best-selling book of the 19th century behind the Bible.


Published in 1852, it did indeed have great influence by giving a needed shot in the arm to the Republican Abolitionist Movement bend on defeating the Democrats who supported the buying and selling of slaves as wee as the owning of black slaves.

While this book gave life to ridding the nation of slavery, Democrats and prosperous plantation owners had some influence too - and banned the book due to its anti-slavery themes.

Surprisingly, they were not alone in their decision. Tsarist Russia did the same in objection to the book’s “undermining religious ideals” and presenting a model of equality.

Another subtheme was the moral authority of motherhood.

The author, Stowe, saw motherhood as the “ethical and structural model for all of American life,” and believed that only women had the moral authority to save the United States from slavery.

Critics have noted that Stowe’s female characters are often domestic clichés instead of realistic women - but then how much weight can you put in what her critics say.

Like most Democrats at the time, those who were critical of her work wanted her book killed and gone - and yes, they would use any excuse they could find to do it.

Unable to stop her, Stowe’s novel nevertheless reaffirmed the importance of women’s influence and helped lay the seeds for the women’s suffrage movement and women's rights several decades later.

Why Are Democrats In Favor Banning Books?

In the same way that the Nazi Party in Germany in to the 1930s burned books to keep the truth and ideas of freedom out of the heads of those who they were trying to enslave, Democrats have wanted to bury their deeds because their history is not very nice to look at.

They want to bury and ban a lot of America's Greatest Literature simply because Democrats don't want us to know that they were in fact against freeing black slaves, that it was Democrats who started the Ku Klux Klan, and were a part of the same Democrat Party who fought against giving freed blacks their 2nd Amendment rights to guns to defend themselves against Democrats and the Klan.

Democrats have been against Christians and Catholics, and have a long history of being against women's rights.

One way to hide their infamous history is to ban books showing what they have done.

And yes, that in itself is the real reason that most Democrats who are teachers, school administrators, on school boards, and are in politics fight to suppress some of America's greatest literature.

They simply don't want us knowing about their past before Franklin D. Roosevelt, and they use the excuse that certain literature is racist to keep it from us.

Think about it, would you?

During the 1840s and 1850s, Democrats insisted on protecting slavery in all the territories while Republicans resisted them and fought to fight the spread of slavery.

In 1860, Democrats adopted a pro-slavery platform in an election campaign that was won by Abraham Lincoln and the newly formed Republican Party which consisted of people who were anti-slavery.

Democrats took the nation to war over their beloved slavery. After the Civil War, most opposed the Republican Party's Radical Reconstructions support of black civil and political rights.

The Democrat Party identified itself as the "white man's party" and demonized the Republican Party as being "Negro dominated."

Determined to re-capture the South, Democrats considered it a mission to "redeem" state after state - sometimes it was peacefully, other times by fraud and violence.

By 1877, when Reconstruction was officially over, the Democratic Party controlled every Southern state. 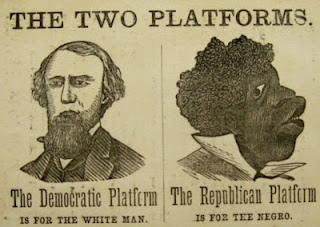 The South remained a one-party region until the Civil Rights movement in the 1960s.

Democrats throughout the nation, most of whom had prejudicial attitudes towards blacks, offered no challenge to the discriminatory policies of their brothers in South.

One of the consequences of the Democratic victories in the South was that many Southern Congressmen and Senators were almost automatically re-elected every election.

Due to the importance of seniority in the U.S. Congress, Democrats were able to control most of the committees in both houses of Congress and kill any civil rights legislation.

Even though Franklin Delano Roosevelt was a Democrat, he rarely challenged the powerfully entrenched liberal Democrat politicians during that time.

To give you an example of how racist Democrats were under FDR: when the House passed a Republican Anti-Lynching bill several times in the 1930s with bi-partisan support, the Democrat senators filibustered it to death in the Democrat controlled Senate.