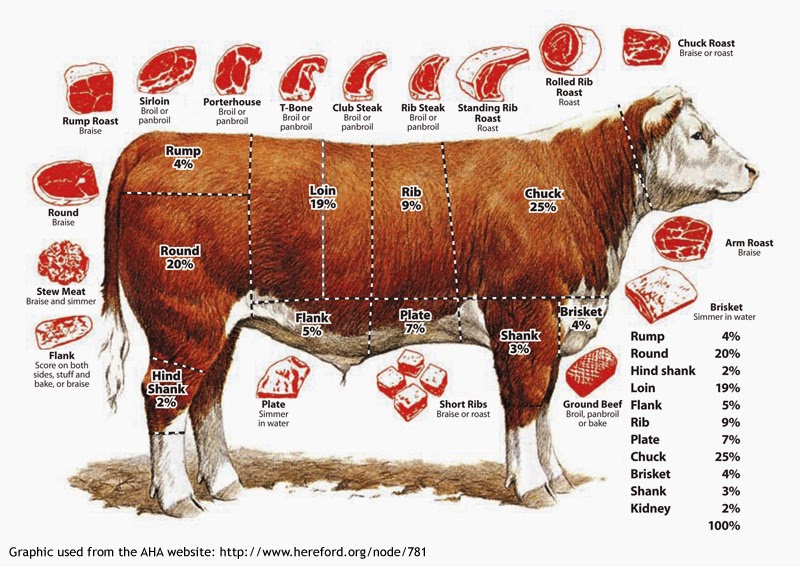 Beef prices have been historically high recently for the beef producer and at the grocery store.

Raising cost to produce and limited supply are the key factors which are responsible for pushing beef prices to historically high levels.

While beef prices started an upward movement back in 2013 in response to the historic low cattle inventory, the total cattle inventory is at its lowest mark since 1951.
The U.S. cattle herd was downsized 5 to 7 years ago due to widespread drought.

And yes, as taking place in California right now, there have been some very dry years which have limited forage and beef production.

While a weak economy has played a major role as well, the major problem for beef producers is still ever increasing costs of feed, fuel and fertilizer.

The "Big Three," as they are often referred to, are at historic highs which only hurt beef producers by cutting or eliminating their profits.

Yes, it's hard to feed the world when the price of feed, fuel, and fertilizer is putting our beef producers out of business. Of course, government over-regulation doesn't help either.

The good news for both beef producers and consumers who may be experiencing sticker-shock is that this is the second year of good corn and soybean yields, so the industry is expecting lower grain prices.

After a very good growing season across the Corn Belt, farmers are expected to post a record harvest which will push down prices more than 20%.

The USDA said last week it expects corn production in the U.S. to top 14 billion bushels, above last year’s historic harvest of 13.93 billion.

The orange crop in Florida is poised for a historic low harvest this year following a bacterial disease, and analysts say this is causing prices to shoot up.

The agriculture disease, known as Citrus greening, has been cutting off nutrients to the fruit and causing oranges to drop from the trees prematurely.

This presents a major issue for supplies, since the 6,000 citrus growers in Florida supply oranges for 56% of the orange juice consumed in the U.S., according to the Florida Department of Citrus.

It's said that traders will have to wait until October for the first U.S. Department of Agriculture's orange-production forecast for the next crop year, but things are looking bleak.

The USDA's final 2013-14 estimate of 104.4 million 90-pound boxes was the lowest output in 29 years, and another small harvest could push prices higher.

To make things worse, growers are also up against shrinking demand.

Recent reports from both Nielsen and the Florida Department of Citrus shows that consumers are losing their taste for the citrus beverage.

In the four-week period ending August 2nd, believe it or not, sales were down 9.2% from a year ago.

The average retail price of a gallon of orange juice is $6.44, according to Nielsen data. The price increase of 4.1%, year over year doesn't help matters for consumers in a weak economy.

And yes, there are other reasons for the decline of orange juice.

Fact is Americans are cutting back on sugar intake, and nutritional experts have been advising against the sugary fruit drink.

The average glass of orange juice contains about 21 grams of sugar. In contrast, a whole medium orange has about 11 grams of sugar, plus 3 grams of fiber which is missing in a glass of juice.

While one serving of orange juice has more than 100% of your recommended daily intake of Vitamin C.  Americans are under-consuming fruit and vegetables.

Besides that fact, there are simply too many other options out there

With a growing movement to consume less sugar, there has been a lot more new products added to the market such as low-calorie juices and varieties like jug juices.

If orange juice being high isn't bad enough, coffee futures are up more than 70% year-to-date.

Back in June (2014), Starbucks announced that they would be raising prices on some drinks by 5 cents to 20 cents, as well as a $1 increase for the price of packaged coffee that it sells to grocery stores.

Traders worry that crop damage from a January and February drought in Brazil may be worse than previously forecast. Either way, expect to be paying more for a cup of coffee whether it's coffee or some latte' thingamajig.

The price of bacon is surging and the cost of other morning staples, like coffee and orange juice, it is set to rise because of supply problems from droughts to disease on U.S. pig farms.

U.S. food prices have had its biggest increase in nearly 2 ½ years.

While the government still sticks to its story that their adjusted Inflation figures remain low, the increases in food prices are forcing everyday shoppers to search out deals and cut back.

So yes, while Obama and the other fat cats in Washington can take extented vacations completely paid for by the taxpayer, the average American is hit even harder as we try to make ends meet.