Is Obama Crooked, Incompetent and Stupid? 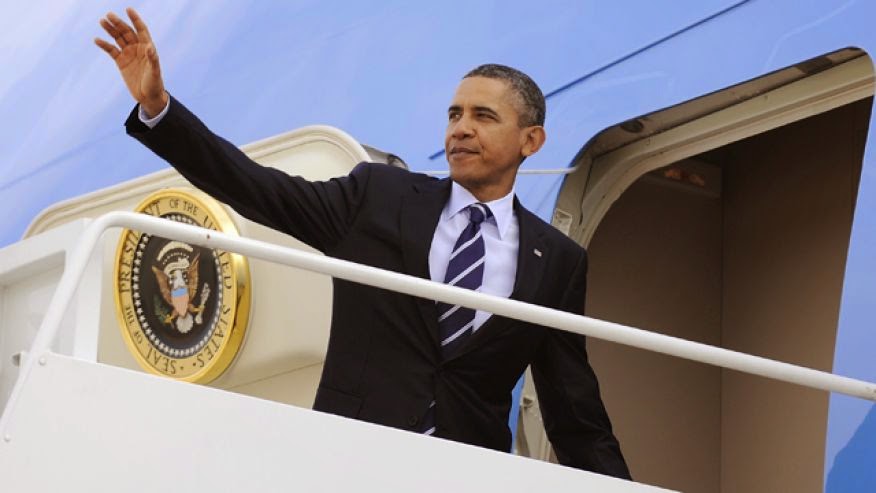 President Obama looks presidential as he waves to the people as he steps into Air Force One, too bad looks are so deceiving.

I'm sure I'll be called a "racist" for saying the Obama Administration is lazy, but so what.

Fact is, his administration is what they are and there is no changing the fact that his entire administration has been a complete failure in protecting America, defending the Constitution, and upholding the law -- yes, all the things that he is sworn to do.

And yes, he has been a very successful at pushing the Socialist doctrine of government control and elimination of individual rights.

And there lies the problem for Mr. Obama, his promotion of a Socialist America has not gone over very well with the American people.

And yes, his willingness to neglect his sworn duties, and break the law or only enforce the laws he wants to observe has not gone over very well as well. 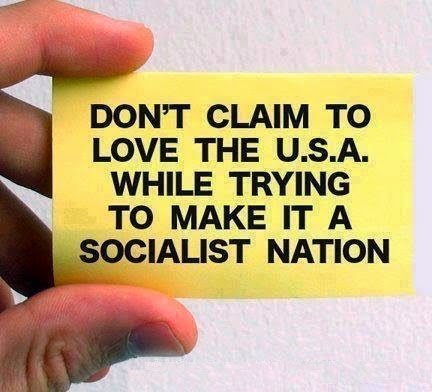 Because of this, Obama is now being seen for what he is -- a crook, an incompetent, and rather stupid.

While I'm being called a racist, the question should be asked:

Are Americans right in thinking that Obama is crooked and incompetent and stupid because of he's ineffectively managing the government?

Well, according to recent polls, 6 out of 10 Americans say "Yes" -- and that including about 30 percent of the registered Democrats out there.

6 out or 10 Americans, yes, an overwhelming majority, say the White House has not been competent at managing the federal government.

Some 32 percent of Democrats join 67 percent of independents and 84 percent of Republicans in holding the view that President Obama has exceeded his authority under the Constitution when he unilaterally changed the health care law by executive order -- and continues to do so without impunity.

And, more generally, a similar majority disapproves of Obama bypassing Congress, acting unilaterally and refusing to enforce laws he disagrees with.

Obama’s use of executive power plays well with the Democrat Party faithful, as a 64-percent majority of Democrats approves of his actions, while a majority of every other demographic group disapproves -- including fully 91 percent of Republicans.

And frankly, if George W. Bush tried to do what Barrack Hussein Obama has been doing -- he would have certainly been impeached.

Some prominent Republicans, including 2008 Vice Presidential candidate Sarah Palin, have called for the president’s impeachment.

But while nearly 4 in 10 Democrats think Obama is guilty of executive overreach on changing the Obamacare law, and 1 in 5 Democrats favor impeaching Obama, there are those against it for fear of being labeled racist.

And no, since it has become apparent that anytime any of us Conservatives call for Obama to abide by the law or face the consequences that we are called "racists" -- that word has lost its true meaning.

In an America where a citizen can be labeled a racist for disagreeing with a President's policies -- as in an attempt to negate his critics -- we're in trouble.

While all of this is true, and despite believing Barack Obama has overstepped his authority as president, most voters reject calls to impeach him for any of his "high crimes and misdemeanors" --  or for any other reason.

Frankly, I really believe that Americans don't want to replace one village idiot with another -- since Vice President Joe Biden has proven himself to be an idiot and buffoon every time he opens his mouth.

Among Republicans, 83 percent consider Obama’s actions on the health care law a violation of the Constitution. Yet far fewer Republicans -- although still a 56-percent majority -- favor impeachment.

And while an overwhelming 55 percent of Independents believe Obama violated the Constitution, only 37 percent favor impeachment.

The highest level of support for impeaching Obama -- 68 percent -- is among those who relate themselves with the Tea Party.

In early July, House Speaker John Boehner took steps to file a lawsuit against Obama for his “failure to follow the Constitution” on the health care law by altering the individual mandate via executive order.

Who would have thought that we would have gotten to the point in our country where we the people have to sue the president of the United States to try to make him "follow the Constitution"?

It is apparent that he enjoys a lifestyle similar to the one he was raised in, one of privilege, travel, comfort, and fun, with no responsibility.

His history shows that he does not like to work hard at anything other than leisure, golf and travel.

Yes, that is the strong suit of the White House, and there's no getting around the fact that this presidency is the dumbest, most ill-informed, laziest on record.

Before calling me a "racist", read the article below and see for yourself just how many times the Obama administration said "We did not know ..."

"We did not know": 9 times the Obama administration was blindsided

The unfolding sectarian violence in Iraq is just the latest crisis where the Obama administration seemingly has been caught off guard.

From the Veterans Affairs scandal to Russia's swift annexation of Crimea, news of the world somehow keeps taking the commander-in-chief and his team by surprise.

The following is a refresher of major domestic and foreign policy developments that, apparently, were news to the White House.

The New Yorker (1/27/2014): "In the 2012 campaign, Obama spoke not only of killing Osama bin Laden; he also said that Al Qaeda had been 'decimated.' I pointed out that the flag of Al Qaeda is now flying in Fallujah, in Iraq, and among various rebel factions in Syria; Al Qaeda has asserted a presence in parts of Africa, too.

'The analogy we use around here sometimes, and I think is accurate, is if a jayvee team puts on Lakers uniforms that doesn’t make them Kobe Bryant,' Obama said, resorting to an uncharacteristically flip analogy. 'I think there is a distinction between the capacity and reach of a bin Laden and a network that is actively planning major terrorist plots against the homeland versus jihadists who are engaged in various local power struggles and disputes, often sectarian.'"

Politico.com (3/4/14):  "A White House spokeswoman declined to comment on whether Obama was satisfied with the intelligence he received on Russian intentions in Ukraine. But spokesmen for the U.S. intelligence community defended its work".

"Prior to and throughout the situation in Ukraine, the intelligence community has provided timely and valuable information that has helped policy makers understand the situation on the ground and make informed decisions. That continues to be the case today," said Shawn Turner, a spokesman for Director of National Intelligence James Clapper.

"Any suggestion that there were intelligence shortcomings related to the situation in Ukraine are uninformed and misleading.... While officials appear to disagree about the insights offered by U.S. intelligence, it’s beyond dispute that a lot of public commentary pundits offered as the Ukraine crisis unfolded was less than clairvoyant."

Wall Street Journal (10/28/2013): "Obama was unaware for the last 5 years, the NSA had been spying on German Chancellor Angela Merkel and other members of world leaders. Only after an internal Obama administration review in 2013 did the White House know of the spying."

President Obama news conference with Turkish Prime Minister Erdogan (5/16/2013): "I can assure you that I certainly did not know anything about the I.G. report before the I.G. report had been leaked through press -- through the press."

JAY CARNEY: "When you say these problems, the fact that there have been bureaucracies --"
ACOSTA: "The delays have been known for some time."

President Obama in a joint press conference with British Prime Minister Cameron (May 13, 2013): "Well, let me take the IRS situation first. I first learned about it from the same news reports that I think most people learned about this. I think it was on Friday."

Remarks by President Obama on HealthCare.gov (10/21/2013): "Of course, you've probably heard that HealthCare.gov -- the new website where people can apply for health insurance and browse and buy affordable plans in most states -- hasn't worked as smoothly as it was supposed to work. And the number of people who visit the site has been overwhelming which has aggravated some of these underlying problems."

Jay Carney during a White House press briefing (10/23/2013): "While we knew that there would be some glitches and actually said publicly that we expected some problems, we did not know until the problems manifested themselves after the launch that they would be as significant as they have turned out to be."

QUESTION: "When did the president find out about the Department of Justice's subpoenas for the Associated Press?"

CARNEY: "Yesterday. Let me just be clear. We don’t have any independent knowledge of that. He found out about the news reports yesterday on the road."

QUESTION: "What was his reaction to that? Does he believe that this was an overreach?"

CARNEY: "All I can tell you is that I cannot and he cannot comment specifically on an ongoing criminal investigation or actions that investigators at the Department of Justice may or may not have taken. It would be wholly inappropriate. And if we did comment on it, or if we did have insight into it, you would appropriately ask why and is that correct procedure, because it would not be."

9. Air Force One flyover in Manhattan

President Obama during media availability on arrival at FBI headquarters (4/28/2009):

QUESTION: "Sir, what do think of the Air Force One incident --"

QUESTION: "Are you concerned about New York City yesterday, sir, with the Air Force plane?"

PRESIDENT OBAMA: "It was a mistake, as was -- as was stated. It was something we found out about along with all of you and it will not happen again. Thank you."

After looking at the evidence above, one can understand why the American people see Obama as stupid, incompetent and a criminal.

And yes, one can only wonder what this administration does to justify the Millions of dollars in salaries that the American Taxpayer are paying them?

And yes, as well as the Billions of dollars that President Obama has spent on what his administration calls "needed vacations"?

Every aspect of Obama's life has been that of privilege and wealth without having to work for it.

It is no wonder that he is now being seen as being in charge of the laziest, most ill-informed, dumbest administration that America has ever had to endure.

If he were working in the private sector, he'd be fired.

And yes, if he were not president and a Democrat, he would have been arrested for the Federal Laws that he was broken or failed to adhere to.

But then again, his supporters will say that reports like this must be "racist" -- after all, it is now "racist" to state factually correct evidence.