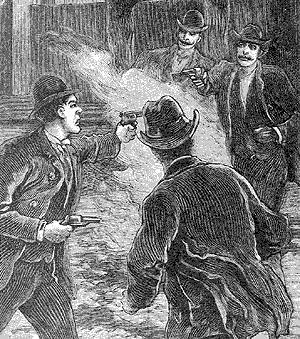 Oliver Milton Lee was reared in the tiny town of Buffalo Gap in Burnet County, Texas. At the age of eighteen, Oliver and his older half-brother Perry Altman, led their widowed mother and the rest of the family to a ranch in New Mexico's Tularosa Valley.

Widely known as a crack shot, Lee first fired his guns in anger during a feud with a neighboring rancher, a bully named John Good.

Lee procured the bullet which had killed McDonald and carried it on a watch chain, and he was one of four men charged with Walter Good's death.

After Lee was released from custody, he began to make great strides in extending his ranching enterprise, eventually carving out a prosperous spread called the Dog Canyon Ranch.

During these years Oliver Lee had been appointed deputy sheriff,  and as a deputy U.S. marshal. In the 1890's, he increasingly came under suspicion in the dastardly and mysterious murders of A. J. Fountain and his eight-year-old son.

Lee returned to ranching, selling out in 1914 to a group of businessmen but staying on as manager. Later he was twice elected to the state legislature, and he served as an officer and director of numerous business organizations until his death in 1941 of a stroke.

Born and bred in Jack County, Texas, Bill Earhart arrived in New Mexico in 1883 with his friends Jim and Clay Cooper.

Five years later, while directing a roundup on the Cooper ranch in the Tularosa country, he fell into a dispute with a rugged cattleman named John Good and thereby became involved in a range war directed against the bullying rancher.

Later, Earhart returned to Texas where he was killed in 1896.

As for John Good, he first became known as a big bullying ruffian who ran a ranch stocked with stolen beef west of Austin, Texas.

After a cattle drive to Newton, he was present when Cad Pierce was killed by Ed Crawford.

Involved in a shooting in 1877, Good moved to Coleman and opened a hotel, but he soon became unpopular, and by 1880 he had moved again. This time to a ranch fifty miles northwest of Colorado City.

A short time later, he migrated to New Mexico, establishing a ranch near La Luz and a relationship with a notorious local woman known as Bronco Sue Yonker.

In 1884, Bronco Sue had killed a man in Socorro and was suspected of further violent deeds.

The relationship soon ended when Mrs. Good and John's children arrived, but Bronco Sue merely took up residence nearby with a man named Charley Dawson -- yes, that made the situation even worse.

In December, 1885, Good killed Dawson, then turned to more practical matters. He built a ten-room adobe house, imported his brother Isham and his large family, and ruthlessly began to accumulate wealth.

In 1888, a young man named George McDonald clashed with Good.

Later when McDonald was assassinated, his friends blamed Walter Good, one of John's sons. A feud broke out and Walter Good was shot dead.

Surprisingly the senior Good soon gave up the fight, disposed of his property, and drifted into Arizona and then Oklahoma where he was last noted working for small wages.

Oh, how the mighty had fallen.

Here was a man who was said to normally have a quiet demeanor yet could be "rash and deadly". Some described him as "a perfect demon" when drinking.

And yes, the Wichita police and most of the saloon keepers in town were well aware of his trait of being a mean drunk.

Powell was widely rumored to have killed two men before coming to Wichita --supposedly he killed one man with his fists using brass knuckles to get it done.

While in Wichita, Powell was hired as a city bus driver by the Southwestern Stage Company. He was killed after a vicious exchange of gunfire with Marshal Mike Meagher in 1877.

He was a drunken gunman who lived in Delano, the vice district of Wichita, Kansas, during the 1870s. He was forever getting into trouble with the law and, in the spring of 1873, he was involved in a violent argument in a Wichita livery stable.

He pulled a gun, as did others, and a brief shootout occurred where one of Anderson's shots smashed into the forehead of a passerby, killing him. The death was ruled accidental and Anderson was released.

A short time later, on Oct. 27, 1873, Anderson was lounging inside of Rowdy Joe Lowe's Delano bar when an enraged cowhand, Edward T. "Red" Beard, burst into the bar.

He had been jilted by one of the saloon girls, Annie Franklin, and he sought revenge, pulling his gun and shooting the girl in the stomach.

Lowe let loose with his shotgun and blasted Beard who fired back as he staggered outside.

In the exchange of bullets, Anderson was caught in the crossfire, taking a load of buckshot in the head which caused him to become permanently blind, and ended his gunfighting days.

Anderson spent the rest of his days sitting outside cowtown saloons, hat in hand, begging coins. He'd probably be shocked to find his name here.

The son of the man who founded Beardstown, Illinois, Edward T. "Red" Beard was well educated and married to a cultured woman from Virginia.

Although he was a member of a prominent family and the father of three children, Beard abruptly pulled up stakes in 1861 and went West.

While it isn't known why he left, it wasn't unusual to see men leave everything to chase gold and riches -- if that were indeed the case.

He became a footloose and somewhat notorious character in California, Oregon, and Arizona before being attracted to Kansas by the cattle boom. In Wichita, he built a dance hall with a disreputable reputation.

In 1873, it's said he engaged in a series of wild shootouts, the last of which caused his death at the hands of Rowdy Joe Lowe.

Whatever happened to him after that is anybodies guess.

Like many, he actually stayed when peace resumed. As a miner, he built up just enough of a stake to open a saloon in booming Elizabethtown.

In 1871, Stinson killed gunman Wall Henderson, and soon after that he moved his saloon business to Santa Fe with the intention of putting trouble behind him.

The saloon business being what it was, he became involved in four other shooting scrapes -- none resulting in deaths.

By 1890 alcoholism had so seriously debilitated him that he applied for and received a ten-dollar-per-month Veteran's pension. Imagine that.

In 1895 he was admitted as an invalid to the Pacific Branch of the National Home for Disabled Soldiers near Los Angeles, where he died in 1902.

Here was a South Texas rancher who was in and out of trouble during his life as often as bad luck would have it.

In 1894, he was in a bad shootout in Jake Biushell's saloon in Alleytown, a small town near Eagle Lake.

The boyfriend of Tuck's daughter, Dora, was working in the saloon and overheard their conversation in which Jake said, "I'm goin get Tuck if I have to burn the house down and kill the whole family."

The boyfriend went and told Tuck the story. Tuck put his pistol in his belt and went over to the saloon to confront Jake.

It's said that he walked in with his pistol cocked and in his hand ready for what may come. There was only Jake and Jake's employee, the bartender there.

Tuck pointed his pistol at Jake's chest and said "Jake, I hear you want to kill me?"

Jake moved his hand inside his coat apparently going for a gun, that dumb move made Tuck pull the trigger and a bullet slammed into Jake.

Tuck then pointed his pistol at the bartender and slowly backed out of the saloon. Tuck went outside and mounted his horse.

It's said that as he rode away he passed the saloon and saw Jake in struggling to die, so Tuck pulled his pistol and shot Jake again from his horse.

The next day Tuck surrendered to the sheriff in Eagle Lake.

Tuck was tried for the murder of Jake Biushell and was given a 20 year prison sentence. But the sentence was overturned and a retrial was planned. It was later ruled self-defense.

If you don't think the Ku Klux Klan was already in Texas by the 1890s, take a look at what happened to Tuck two years later in 1896.

Tuck and his wife went into the general store in Alleytown to buy some supplies. Tuck had his baby daughter in his arms with his back to the door.

He put his daughter down on the counter for a moment to pick up the bag of groceries he had just bought. Just at that very moment in the room next door, a 19 year old gunman hired by the Ku Klux Klan, was aiming his shotgun through a knothole in the adjoining wall. It was aimed right at Tuck's back.

As soon as Tuck put his daughter down, the killer pulled the trigger striking Tuck in the back with 11 of the 12 balls of lead from the one shot.

Eyewitnesses said later that, as Tuck fell, another back-shooting killer walked up and hastily tried to shoot Tuck in the head with a small .22 caliber pistol -- but instead, he shot him in the neck.

Cut in half by that shotgun, and bleeding from the neck, Tuck soon died on the floor of that general store.

It is interesting to note that one of the killers got away while the other was apprehended and later tried. But believe it or not, the killer got off.

They say the jury let him off because of fear of reprisals from the Klan. Yes, even back then.

If you would like to do more reading on more of Little Known Old West Gunmen & Outlaws, don't hesitate to visit:

This information was compiled from multiple sources. 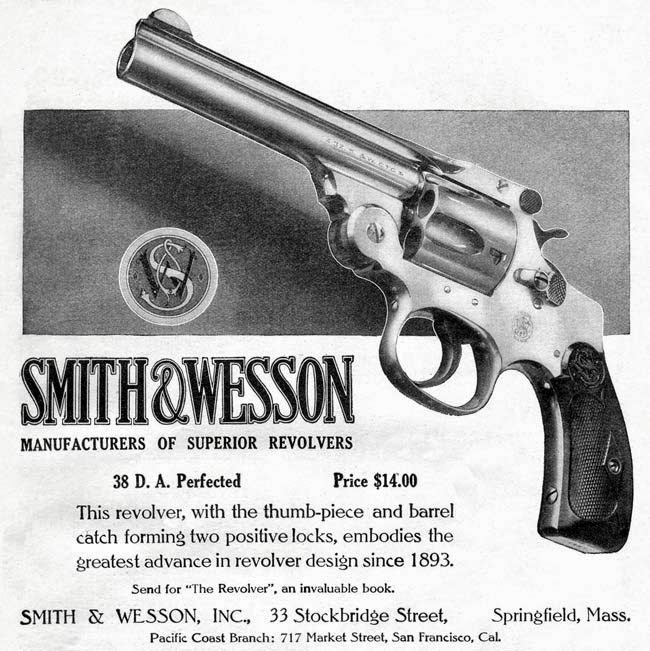