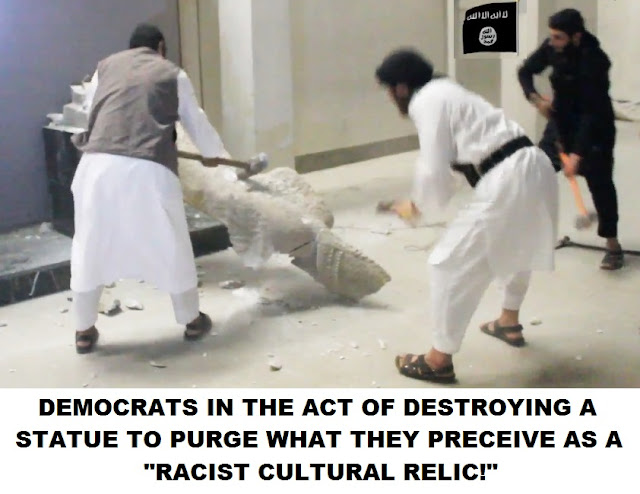 Like ISIS on the march to destroy any semblance of the historic past in the Middle East, Democrats are seizing the opportunity to destroy American History involving the Civil War in the South.


And yes, that is how I see the removal of the Confederate Battle Flag and the attack on artifacts that were erected after the Civil War -- namely statues and plagues and such.

While the Confederate Battle Flag certainly belongs in an honored spot in any museum, Democrats are acting out a desire to purge, to scrub, to completely disrespect and disregard the sacrifices of men and women who fought for the South.

As for the Confederate Battle Flag itself, like it or not, it is a part of American History. And whether Liberals like it or not, it represents the Rebel in the American psyche. But frankly, that is our heritage as a nation. And really, maybe that's what they hate so much.

Yes, we fight the Democrats and the Obamas of the world, and their need for power at the price of our liberty.

And frankly, if it was strictly over slavery, if so, then why did non-Southern states see it as oppression by the Federal Government?

Yes, along with the South, efforts to secede were also made by Northern states including Maryland and Delaware. Maryland's secession from the United States was halted by Federal imposition of Martial Law. Delaware failed to secede because of divided loyalties.

With that fact alone, one can see that history shows that, like it or not, we today more than 150 years later cannot truly understand the allegiances of the people at that time -- or their distaste for oppression.

Remember, General Robert E. Lee himself, long before taking command of the South's army, spoke about defending his county -- which he saw as the nation of Virginia.

I believe that the 13 colonies banned together to make a united front against England, no different than the United States joined with England and France and other nations in a united front as allies to take on Hitler and Japan during World War II.

And yes, I believe that all of those who united in the cause to fight England saw themselves as independent nations, sovereign states that could pull out of that association at any time they pleased.

For the record, back in the late 1980s, in Eastern Europe, Poland was pulling away from the Soviet Union. Poland was one of the Soviet Union's Iron Curtain countries. Poland was trying to shake off the shackles of an oppressive central government. The Soviet Union was threatening Poland with a use of military force if they decided to try to secede.

I remember a story that was related to me during that time about an American diplomat in Europe who said that "Poland had the right to pull away from the Soviet Union and that the Soviet Union should respect their desire to make to be a sovereign nation."

The answer he received shocked him. He was asked if that was "the same right that South Carolina, Mississippi, Florida, Alabama, Georgia, Louisiana, Texas, Virginia, Arkansas, Tennessee, and North Carolina had when they tried to pull away from the United States because they saw the American Federal Government as oppressive?"

The man asked another question, "What is the difference between occupied Poland after World War II with the Soviet-installed government in Warsaw and the occupied South after the Civil War during Reconstruction?"

The diplomat was silent for a moment then answered, "We were all Americans."

The man answered, "Yes, but it took a bloody war with over 650,000 dead to keep you all in the United States, even though some Americans did not want to."

Since the Polish Flag today has the design that was banned under the Soviet Union, I can't help but wonder if one day the banned Confederate Battle Flag will resurface over an independent Southern nation? Who knows?

Can you imagine for a moment if a nation, say France for example, which belongs to NATO, were told that the United States would invade that country if they did not stay in NATO?

Can you imagine if a nation belonging to the European Union, say Germany for example, were told that they would be invaded by the other European Union states, nations, if they decided to leave the EU?

I see the Confederacy in the same way. And yes, I truly believe that those states, those independent nations, those which joined the United States, would have never done so if they thought they could not leave the association they decided to join.

No, many of those states, with independent governments and laws, would have never been part of the United States if they felt that one or a few other states could tell them how to live and prosper.

Need proof of that? Read the debate that took place of the Declaration of Independence when the South did want to go along with war against England. The Southern colonies were promised strict observance of their sovereignty if they because part of the union.

And frankly, while others can say that the Civil War was fought solely over the issue of slavery, they are being dishonest.

I believe the Federal Government was seen as oppressive. Besides, one factor other than slavery was the effects of a U. S. protective tariff that provided 90% of all Federal revenue. It effected the South mush harder than it did the North.

After the U.S. increased the tariffs, foreign governments retaliated with higher tariffs of their own. Since Southerners were generating two-thirds of U.S. exports at the time, they were hit the hardest and bearing two-thirds of the retaliatory tariffs from foreign countries.

Federal tariffs also had more of an effect for making Southerners want to secede, more than slavery did, because the heavy tariffs meant that 18.5% of America's population, those Americans who lived in the South, were saddled with three times their proportionate share of the Federal Government's costs.

Yes, that is a big part of what made Southerners pick up arms besides the issue of slavery. And also, Southerners don't like to be pushed around.

I've spend a lot of time in the South. I've worked on jobs throughout all of the states. If there is one thing one learns quickly down there is that Southerners have a pride of their homeland the likes that Northerners do not.

Now the Democrat Party, who's legacy is the promotion of slavery, and the creation of both the Ku Klux Klan as well as Segregation, wants the symbols of the Civil War destroyed.

Now they, along with a few Republicans who have hitched their wagon to a couple of Political Correctness jackasses, want to erase from view any symbol of the history of the American Civil War in the South.

Those doing this are saying that the South's Confederate Battle Flag is a banner of slavery and oppression, yet it was the North who reaped the benefits of slavery by way of the manufacturing of the materials that those slaves harvested.

I find it interesting that the slave labor and the oppressed in the cities in the East are not talked about today. The factories where children were chained to machinery during the Civil War and into the 1920s.

And yes, the North used convict labor, prison camps, established a military Daraft to force men to fight for the Union.

But then again, I know these things because I've decided to find out how things were in the North at the time. Unlike Southern children who learn about the mistakes and reasons for the Civil War, Northern children are not taught the history of an event that had such an impact on the United States as a nation.

Yes, whether Liberals get it or not, whether they can truly understand it or not, Southerners are taught the great sacrifices, the turmoil, and the lessons of that conflict.

Southerners are taught at a young age that freedom from oppression is something worth fighting for, even if you lose the fight.

While Northerners are not taught these things, that does not mean they do not care. You see, many Northerners fly the Confederate Battle Flag just as many do in the South. Many in California do, and yes there are even people in Alaska who fly the Rebel flag because they see it as a symbol of defiance.

Like ISIS blowing up ancient works and monuments to their ancient past in Syria and Iraq, today we Americans have Democrats who want to tear down the statues of the men who fought against what they saw as oppression.

Democrats want to rip down the flags, and they want to desecrate the graves and the sacrifices of soldiers who fought what they saw as oppression.

And don't fool yourself into thinking it's only the Confederate Battle Flag and Confederate Statues and grave markers they are after, Democrats are going after anything that has to do with the Civil War.

Reports are out now that the classic film "Gone With The Wind" based on Margaret Mitchell's book of the same name, a book which painstakingly examined the South during the period of just prior to and during the Civil War, is now considered Racist.

By the way, Margaret Mitchell won the National Book Award for Most Distinguished Novel of 1936, and the Pulitzer Prize for Fiction in 1937 for Gone With The Wind.

It was a movie that gave an unknown English actress her big break. And yes, while Hattie McDaniel was the first black American to take home an Oscar for Best Supporting Actress for Gone with the Wind, she was criticized by the Black community for consistently playing a maid.

Her portrayal of a maid is considered an endorsement of racial stereotypes, and her absence from the Civil Rights movement drew further criticism of her. While she personally stated that she was a neutral party avoiding political issues, the black community saw differently and attacked her -- her career paid the price.

Hattie McDaniel’s film roles seemed to dry up as a result of the pressure that was put upon the studios at the time.

So yes, though millions of Americans were out of work during the Great Depression and were doing anything to make an honest dollar, some felt she shouldn't have accepted the role that made her famous -- simply because they say it was demeaning, even though it was historically accurate,

And now, because of Political Correctness, Democrats want the movie Gone with the Wind banned.

Those who believe in this sort of horseshit would have fit very well in Nazi Germany's purge of books that they found unacceptable.

The person who came up with this idea of banning Gone With The Wind would have been perfect working for the Nazis burning books.

Democrats see the removal of the Confederate Battle Flag and statues, or even books like those of Mark Twain, and films such as Gone With The Wind as purging what they perceive as "racist cultural relics."

Too bad they do not understand that a relic is defined as an object surviving from an earlier time, especially one of historical or sentimental interest. An antiquity. An object of reverence.

Frankly, I think this whole thing is just more proof of the Democrat's visceral hate for America. I see it as their attempt to purge their own history as a political party and conceal their past. Their actions say there are no limits to their wanting to destroy America.