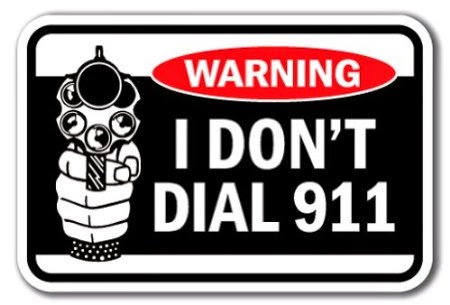 It's not just a slogan for me. Fact is, while I have a great deal of respect and certainly do support law enforcement efforts, I do not dial 911.

The bottom line reason is that I do not depend on others to protect me. I assume the responsibility of protecting myself, my wife, my family, my home, my friends, my community. I have not dialed 911 in over 30 years.

While in the Marine Corps, and then the security field, I found that the one person that I could absolutely depend on to ensure my safety and security is me.

Because of great training and a sense of responsibility that my parents taught me, I trust myself to handle my problems and I provide for my own security needs.

And really, not taking anything away from the job that the police do, but frankly to expect the police to protect us is just fantasy. To think that they can reliably protect you or the ones your care about is just fooling yourself. And yes, reliability is the issue.

For me, besides the many times when the police were late when needed urgently when I was in the security business and providing security coverage during strikes. Yes, strikers can get out of hand. Some turn to physical violence, others take out their hate on their employer by trying to burn down the plant or businesses. Others just want to destroy property of the people they are asking  more money from. Imagine that.

Among the many instances where the reliability of the police was shown to be questionable at best was something that happened to my youngest sister back in the early 1980s.

My sister called 911 when she and two young friends were being bothered by a group of boys who followed them home. The young men sat outside  my parent's home and called out for her and her friends to come out. They also told them in not a vague way what they had in their vulgar minds.

She kept the door locked and called 911. Thankfully after a while those punks jumped in their car and left. They left about 10 minutes before I came driving up.

I met my sister at my parent's door. She was still in high school and my parents weren't  home. She was in a panic, scared to death, crying, and her friends were in about the same condition. Their slumber party turned into a nightmare and calling the police was as useless as always.

I was there for about 5 minutes or so when the police arrived. The police station was less than 2 miles away. They took well over an hour to show up. And once there, they wanted to take a report.

When this same sister was working at McDonald's, she started getting harassed by a customer. Soon she became the victim of a stalker.

When I spoke with the local police department, I was informed that even though we knew who the person was -- they said a crime had not been committed so their hands were tied. Yes, she had to be raped or assaulted first before they would do anything about the stalker.

For many years, I had learned again and again that the police were essentially worthless until after the fact. And to be fair, we should not expect anything a else but that from our Police. They have a tough, and thankless job, but our security is our responsibility -- not theirs.

Knowing this, after talking to my youngest brother, and after letting her manager know what was going to take place, my brother and I arrived at the McDonald's carrying shotguns in the open to escort our sister home safely.

After they drove off, I spotted the creep but was only able to get within a few yards of his car before he sped off. I was going to explain to him the theory of life and death and why it's smart to leave young girls alone.

The barrel of my shotgun puts a lot of emphasis on the point of leaving someone alone. I have found that there is no better tool than my shotgun when wanting to enlighten a punk ass thug on the benefits of leading a righteous life.

These are just a couple of instances in my life when I learned that I needed to handle things on my own and not bother the police. Over the years there have been other circumstances.

I've read lately how Baltimore and Chicago are "America's Killing Fields". Some are saying that it is a result of the police not wanting to put themselves in harm's way for cities that do not appreciate their being there.

Friends, people seem to forget that there is two types of police work: Proactive and Reactive.

Proactive police work is that work police do on patrols dealing with the animals on the street who make victims out of good citizens. It is the self-initiating work where the police officer sees the drug dealer or the assailant with a gun and he or she is there to stop it. It is being in a position to try to stop crime before it happens.

While a police presence helps deter crime, it is impossible for police to be everywhere and protect everyone. It is just not practical to expect that to take place. Besides, I do not want to live in an armed camp guarded by the police. I do not need watching.

Reactive police work is answering their calls as soon as they can get to it.  In many situations their "immediate response to calls" ends up only being their "follow-up investigations." Like it or not, the vast majority of calls are answered by police officers after the fact. Fact is, on the overall, police departments are a reactionary force.

My knowing that most police work is response oriented means that when a crime takes place, they are useless until they arrive. And yes, in many instances that's too late. Consequently, I do not call 911 and instead handle it myself. And yes, that is something that I would recommend more people do.

And by the way, these days, as for thefts and such, most departments will tell you to go on-line and fill out a report there.

As for more serious altercations, since as an American I have the right to protect myself, I call the police on their non-emergency line to report what took place to make a police report if I feel that is even necessary.

More people should think about taking care of themselves and not being so dependent on the police. I don't dial 911 for that reason. I'll call them when I need them or to cover my ass legally.