The United Nations is Not a Government -- They Have No Authority 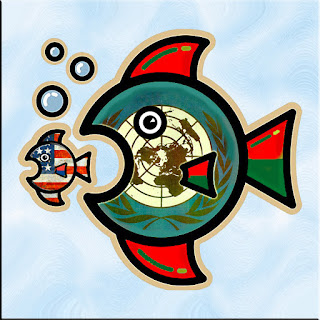 Th United Nations is a world organization established in October 1945 to promote international cooperation.
Back in 2011, I wrote about the seriousness of the corruption at the United Nations and their attempts to circumvent the Constitution of the United States, U.N. "Small Arms Treaty" Will Disarm Americans.

Well, they are still at it! Besides what is going on around the world where the UN has placed itself, on Jun 10th, 2015, it was reported that United Nations peacekeepers had "transactional sex” with 225 Haitian women in return for UN supplies.

Yes, sex for food and medicine, according to a UN's new Office of Internal Oversight Services report. The report was reviewed by the Associated Press and the details are shocking, including the report that approximately one-third of the women were under the age of eighteen.

The 225 women were "coerced" and even threatened into trading sex for food -- all were victimized by the same UN peacekeeping mission who were supposedly there to help and not hurt.

It is not out of the ordinary to hear such stories in Third World countries where aid only trickles down to those who need it, corrupt foreign governments and aid organizations like the UN stop more than 90% of the aid ever getting to where it is intended.

Because of this, and other instances of corruption including the altering of "Gobal Warming" for their benefit and UN officials receiving bribes coming from Islamic countries, I believe it is time to explain to the United Nations that 1) they have no authority and 2) the world is better off without that organization.

Yes, from Agenda 21 crap to their attempting to negate the authority of Americans to run our own country, the United Nations has outlived its welcome!

But even though the vast majority of Americans feel that way, now the Obama administration wants to give the United Nations the authority to deal with foreign governments on our behalf. All  by way of giving the UN control of our treaties.

This all has to stop!

On March 12th, 2015, it was reported that Republican Sen. Lindsey Graham told Fox News, "If the U.N. Security Council attempts to undo sanctions on Iran imposed by the U.S. Congress, it can kiss its funding good-bye,"


While I haven't agreed with Graham on very many things in the past, but I do agree with Senator Graham and other Republicans who say it is time to rethink our financial support as well as the role of the United Nations.

"The United Nations was established on 24 October 1945 by 51 countries committed to preserving peace through international cooperation and collective security. Today, nearly every nation in the world belongs to the UN: membership totals 193 countries.

When States become Members of the United Nations, they agree to accept the obligations of the UN Charter, an international treaty that sets out basic principles of international relations. According to the Charter, the UN has four purposes:

1) to maintain international peace and security;
2) to develop friendly relations among nations;
3) to cooperate in solving international problems and in promoting respect for human rights; and
4) to be a centre for harmonizing the actions of nations.

The United Nations is not a world government and it does not make laws. It does, however, provide the means to help resolve international conflicts and formulate policies on matters affecting all of us"

So, according to the United Nations, it was established:

"to maintain international peace and security; to develop friendly relations among nations; to cooperate in solving international problems and in promoting respect for human rights; and to be a center for harmonizing the actions of nations."

In 2006, the UN Security Council passed Resolution 1696 and attempted to imposed sanctions after Iran refused to suspend its uranium enrichment program.

But frankly, their sanctions have no teeth because the United Nations looks to other nations to support what they do -- if not everyone goes along, well so much for that!

The sanctions encompassed banking and insurance transactions, shipping, web-hosting services for commercial endeavors, and domain name registration services. And yes, over the years sanctions have taken a serious toll on Iran's economy and people.

Since 1979, the United States has led international efforts to use sanctions to influence Iran's policies, including Iran's uranium enrichment program, which most in the United States see as being intended for developing nuclear weapons.

When nuclear talks between Iran and Western governments were stalled and seen as a failure, they were cited as a reason to enforce stronger economic sanctions on Iran.

On June 24, 2010, while the Democrat Party controlled both the US Senate and House of Representatives, Congress passed the Comprehensive Iran Sanctions, Accountability, and Divestment Act of 2010 (CISADA).

But for months now the United Nations Security Council is considering lifting U.N. sanctions on Iran, which would make it more difficult for the United States Congress to thwart a deal signed by the Obama administration.

To fight against the United Nations' efforts of working against the United States, Congressional Republicans say the deal on Iran's nuclear program is a treaty and cannot be signed by the president without Senate approval per our Constitution and they better respect that fact!

Republican leaders vow to retain current U.S. sanctions if they are not allowed to vote on the treaty with Iran.

And no, unlike what Liberals tell you, the United Nation charter does not trump our Constitution! They have no authority!

Senator Graham was among a group of 47 Republican Senators who signed an open letter to Iran in March, saying that no treaty would be enforceable without Senate approval.

Friends, while Democrats can scream foul all they want, the Republicans are just stating the law of the United States as specified in the Constitution regarding treaty ratification.

FACT: The president can make all the treaties he wants, but none are legal treaties until the Senate approves them.

Democrats have criticized the Republican Senators for "interfering" with the White House during the ongoing talks, but President Obama has attempted to do end runs around Congress for years -- and now a vast majority of Americans believe that Obama cannot be trusted to do what's right for America.

Yes, as sad as that sounds, besides being the most incompetent, Obama has headed the most corrupt administration in American history. And yes, that is probably why Obama has become the most untrustworthy president in United States History.

When the president told the Senate and the House, "I will veto any effort on your part to look at this deal and have a vote as to whether or not we waive the sanctions we created" -- what he said is that he has became imperial presidency.

And that is the point here, Obama is supposedly a "Constitutional Scholar" yet he violates the Constitution every chance he wants. And yes, he demonstrates time and time again that he feels he is somehow above the law.

The Constitution of the United States has nothing to do with keeping American citizens in line, it was designed specifically to regulate our government -- including the Executive Branch which is the President -- to keep the government in line.

If the United Nations wants to interfere in the running of our government, the United States of America, allow me to remind them that they are an "advisory" organization with no authority over any nation. And yes, the can leave the same  way they got here!

Besides, if they really think that getting cozy with Obama and disregarding the Republican Congress is a smart play when Congress has to approve the funding for the UN -- then those folks at the United Nations is backing the wrong horse.

For a long time now, the need for the United Nations has become questionable at best.

The UN's track record of stopping conflicts is zero, they organization is steeped in corruption and criminal behavior, their policies have an anti-American slant, their research like that on Global Warming has been shown to be a fraud, and yes, in many parts of the world where the United Nations has sent "peace keepers" they are seen as violators of human rights.

Whether it is the UN's desire to impose the wishes of a handful of representatives on the rest of the world as in the case of UN enforced Gun Control or their desire to implement Agenda 21 land management and population control against the wishes of our citizens, our funding for the United Nations should be cut off.

We should not fund any organization which sets itself about our laws and representatives.

As far as I'm concerned, we should pull out of the United Nations and have them relocate their headquarters to the Middle-East since most of the pay offs going into the UN are coming from Muslim countries who want to see Israel destroyed.

The UN has become a tool for the Left and the anti-Semite, the corrupt and the powerful to push their agenda.

As far as I'm concerned, the United Nations as outlived its usefulness and should be disbanded -- simply because it has overstepped itself by assumed authority that it does not have while not adhering to its own charter.

Yes, the United Nations subverts American sovereignty and I would support any effort to get rid of the UN permanently.