Don't Believe The Bull, Milk Is Good For You

Lately I've read a lot of bull from animal rights zealots like PETA and other crazies who want us to stop consuming animal products including milk and other dairy products.

In fact, if you visit some of the websites of many anti-Milk special interest groups, you'll find dozens so-called "studies" and "medical findings" about the supposed evils of milk. Strange how these supposedly "independent studies" are all sponsored by similar animal rights groups with an agenda to shut down dairies here in the United States.

One very popular claim, as unproven as it is, is that milk contains cancer-causing hormones. And yes, according to the wackos that spread that sort of manure, there has been a Lincoln-est conspiracy by the Dairy Industry and their huge dollars to keep information about this under wraps. No doubt locked away in Area 51!

First, before going on, let's make one thing clear, diary farmers do not have "huge dollars".

Second, because of the animal rights lobbyists and all of their millions of campaign dollars that they contribute to Liberals in Congress, the Federal Government is imposing more and more unreasonable regulations on ranchers and farmers -- and frankly, diaries are going out of business in record numbers.

Milk is an important part of our diet.

And yes, sorry to say, though we begin drinking it when we are young, our intake decreases as we get older when in fact it shouldn't.

Some people shy away from it because they fear that it will add too much fat to their diet. Others leave it out because they believe that they no longer need it. Yet that fact is that we are never too old to reap the rewards of drinking milk. It is a great source of vitamins and nutrients, and it has several health benefits, such as:

Milk and dairy products are providers of calcium, phosphorous, magnesium and protein which are all essential for healthy bone growth and development.

The calcium in milk is easily absorbed and used in the body, which is why milk and milk products are reliable as well as economical sources of calcium3.

A diet rich in protein and vitamin D contributes to bone. Not only do young children need it while their bones are growing, but adults need it to keep their bones strong and to prevent osteoporosis.

It's true and cannot be emphasized enough adequate consumption of milk and dairy from early childhood and throughout life can help to make the bones strong and protect them against diseases like osteoporosis which is a debilitating, brittle bone disorder in later life.

Milk is also great for strong teeth, and it helps prevent tooth decay and cavities. The amounts of calcium and phosphorous in milk and dairy products are also beneficial for the development and maintenance of healthy teeth.

The most abundant protein in milk is casein and is protective as it forms a thin film on the enamel surface which prevents loss of calcium and phosphate from the enamel when the teeth are exposed to acids in the mouth.

Studies have suggested that milk also reduces the effects of cariogenic foods on teeth when consumed together with them in the diet.

In fact, dentists recommend that milk is the only safe drink to have between meals (except for water) as it has been shown not to cause tooth decay even in conditions perfect for damaging teeth!

In order for the calcium to be absorbed by the body, vitamin D must be present. If you have a vitamin D deficiency, buy milk that is fortified with extra vitamin D to ensure that your body absorbs the calcium.


Milk has properties that lower high blood pressure and risk of strokes.

An increasing number of studies suggest that consuming 3 portions of dairy each day, along with 5 portions of fruit and vegetables as part of a low salt diet can reduce high blood pressure in both adults and children.

Although the exact mechanisms involved are not clear, it is thought that the calcium, potassium, magnesium and proteins within milk are all likely to be involved.

It also reduces the liver's production of cholesterol, and it can act as an antacid. Vitamins A and B in milk can help build good eyesight.

Several studies have linked milk and dairy consumption with a reduced risk for cardiovascular disease.
A recent study in Welsh men found that those who drank the most milk had fewer heart attacks than those who had little or no milk in their diets.

This connection could be due to many factors in milk, but epidemiological studies have shown that higher intakes of calcium in particular are linked to a reduced risk of cardiovascular disease.

More specifically, studies have shown that high calcium intakes may reduce high levels of bad cholesterol in the blood, and increase low levels of good cholesterol both of which are known risk factors for cardiovascular disease.

In addition, it is also thought that calcium may bind harmful fats together in the gut and prevent their absorption, which in turn prevents levels in the blood increasing.

Contrary to popular belief, research has shown that people who consume milk and dairy foods are likely to be slimmer than those who do not.

Studies have also shown that consumption of milk and dairy foods as part of a calorie controlled diet is associated with increased weight loss, particularly form the abdomen.

This is particularly beneficial since excess fat around the trunk region of the body is associated with greater risks to health.

The precise mechanisms involved are unclear but are likely to involve calcium which is found in milk and dairy foods.

Studies show that women who drink low-fat or skim milk lose more weight than those who exclude milk from their diet.

Also, it is a great appetizer and it makes a healthy snack. Add a glass to your dinner, or drink a glass while eating a piece of fruit.

Studies suggest that regular consumption of low fat dairy products can help to reduce the risk of type 2 diabetes, which has been a longstanding problem in adults, and is becoming increasingly common in children and adolescents.

A recent study of more than 37,000 middle aged women found that those with the highest intakes of dairy had a reduced risk of type 2 diabetes.

The strongest association was found with low fat dairy products.

Similarly a study of men in 2005 found a reduced risk of type 2 diabetes with increased consumption of low fat dairy, interestingly, every extra portion of dairy consumed was associated with increasingly lower risk.

It is thought that this effect may be due to the combined effects of many beneficial nutrients found within dairy foods including calcium and magnesium, or the fact that dairy foods have a low glycaemic index, which helps to control blood sugar levels.

Milk has also been show to help lower the risk of certain cancers. Fact is there is considerable evidence to suggest that milk has a protective effect on risk of both colorectal and breast cancer with increased intakes.

A recent study of 45,000 Swedish men reported that men who drank 1.5 glasses of milk per day or more, had 35% lower risk of the disease than those who had a low milk intake of less than 2 glasses per week.

Additionally a study of over 40,000 Norwegian women found that those who drank milk as children and continued to do so as adults, had a lower risk of developing breast cancer.

Calcium and a naturally occurring fat in dairy products known as Conjugated Linoleic Acid (CLA) have been suggested as protective components in colon cancer.

In order to remain adequately hydrated, it is recommended that we consume 6-8 cups of fluid each day.

If we become dehydrated, it can result in poor concentration and memory function and leave you feeling irritable and unwell.

Milk is an excellent choice of fluid as it not only re-hydrates the body, but provides a host of beneficial nutrients and protects the teeth at the same time!

Re-hydration after exercise is particularly important to replace lost fluids, and a recent study in the USA found that chocolate milk helped the body to recover after exhausting exercise!

Milk contains protein, which helps to rebuild muscles. Drink a glass of milk after you exercise to give your body what it needs to recover.

It will help to keep soreness at bay while replenishing fluids that you lost during your workout.

Milk is a great way to de-stress at the end of the day. A glass of warm milk will help to relax tense muscles and soothe frayed nerves.

Milk has also been proven to reduce symptoms of PMS and boost energy. The next time you are feeling frazzled, try drinking a glass of milk while you soak in a bubble bath.

OK, so besides drinking it, women take milk baths help their skin stay soft, supple and glowing. You can do the same.

Milk has several nutrients which help skin look its best. It has lactic acid which can act as an exfoliant and enzymes to help smooth skin. It also has amino acids that help keep skin moisturized.

Milk can help prevent damage from environmental toxins because it has antioxidants. Of course if you have a sensitivity to milk or dairy products, milk can actually aggravate your skin -- so you may want to opt for a beer bath!

But if you fine with dairy, then while soaking you can also drink a few glasses of milk each day to get its benefits.

There are several varieties of milk on the market, such as whole, 2%, low-fat and fat free. If you are concerned about the growth hormones used in milk, choose to go the organic route.

With all of the types of milk available, you should be able to find something that fits your diet and nutritional needs.

Milk is one those things that is good for us, and tastes great while we do good for ourselves.

So now, how much do you know about milk? Did you know ... 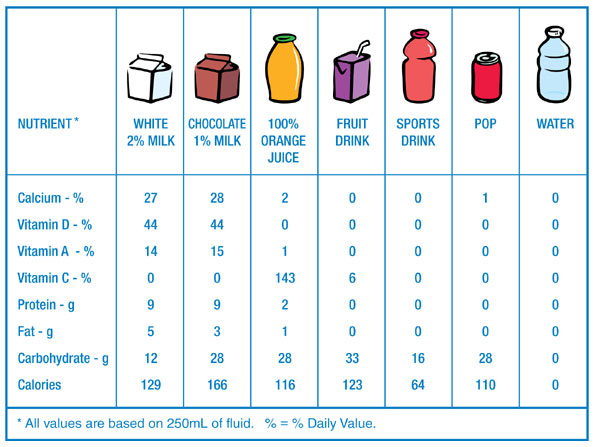 Yes, it really is good for us!