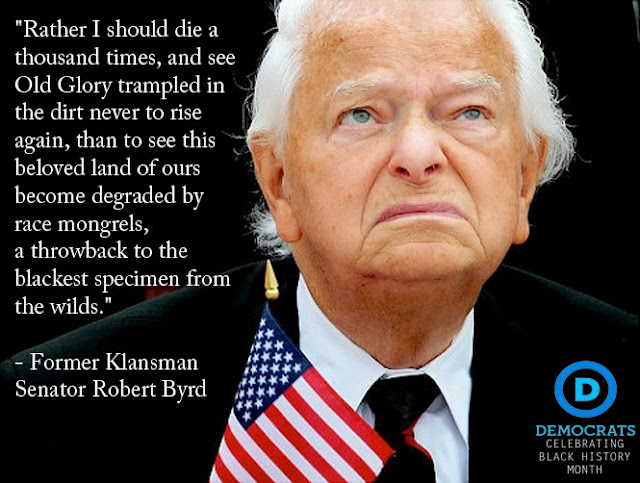 Picking this story from Part Three, we join this last part of the series on the Democrat Party's legacy of racism and segregation to talk about how many black-Americans today refuse to acknowledge that it has been Republicans who have tried to make them less dependent on the Federal Government.

It has been the Republican Party who in reality has tried to make them equal, independent, and economically successful. And who were Republicans? You know, those who the New Black Panther Party calls "boot-licking Uncle Toms"?

Why are such black men as Clarence Thomas and Herman Cain, who will not pledge loyalty to the Democrat Party, attacked in the liberal media today? It is because the Democrats have traditionally been a racist party that is overtly contemptuous and hostile to poor and working people."

Who belonged to the Republican Party, the political party that originated as an Anti-Slavery Party? Well, it is a fact that besides great Black-Americans like Supreme Court Justice Clarence Thomas and successful businessman Herman Caine, there has other prominent names of black Americans which have been, or still are Republicans.

Are all of these black-American Republican men and women, "Boot-licking Uncle Toms" and "Aunt Jemimas"?

I enjoy showing them them those above, and yes, after looking over the above list of the First Black American Senator and Representatives, I couldn't find one "Boot-licking Uncle Tom" among them!

I would like to also inform the militant jerkweed that in fact none in the above list, none in office today, and none of the many Black-American Republicans and Conservatives in America are "Boot-licking Uncle Toms" - or "Aunt Jamimas"!

I find that as just offensive, or even more so, than if he called them "Niggers." It should be reported on every News program out there, and friend of Obama or not, New Black Panther Party's Shabazz should apologize.And certainly, Condoleezza Rice is not some "Aunt Jamima" - though Democrats have tried to paint her as some sort of traitor to her race.

Condoleezza Rice is political scientist and diplomat, the 66th United States Secretary of State, and was the second person to hold that office in the administration of President George W. Bush. Rice was the first female African-American secretary of state, as well as the second African American (after Colin Powell), and the second woman (after Madeleine Albright). She was President Bush's National Security Adviser during his first term, making her the first woman to serve in that position.

Before joining the Bush administration, she was a professor of political science at Stanford University where she served as Provost from 1993 to 1999. Condoleezza Rice also served on the National Security Council as the Soviet and East European Affairs Advisor to President George H.W. Bush during the dissolution of the Soviet Union and German reunification.

The Republican Party was founded in the Northern states in 1854 by anti-slavery activists, modernizers, ex-Whigs and ex-Free Soilers. They quickly became the principal opposition to the dominant Democratic Party. The main cause was opposition to the Kansas–Nebraska Act, which repealed the Missouri Compromise by which slavery was kept out of Kansas.

Democrats wanted slavery spread throughout the nation, but the Republicans saw the expansion of slavery as a great evil. The first public meeting where the name "Republican" was suggested for a new anti-slavery party was held on March 20, 1854 in a schoolhouse in Ripon, Wisconsin.

The Republican Party oversaw the saving of the union, the end of slavery, and enabled the provision of equal rights to all men in the American Civil War and Reconstruction, 1861-1877.

Early Republican ideology was reflected in the 1856 slogan, "Free Labor, Free Land, Free Men", which had been coined by Salmon P. Chase, a Senator from Ohio (and future Secretary of the Treasury and Chief Justice of the United States).

"Free labor" referred to the Republican opposition to Democrat control of slave labor. They believe, as they still do, in independence for craftsman and businessmen.

"Free land" referred to Republican opposition to plantation system whereby the rich could buy up all the good farm land and work it with slaves, leaving the yeoman independent farmers the leftovers. The Party strived to contain the expansion of slavery, which would cause the collapse of the slave power and the expansion of freedom.

Lincoln won the Republican nomination in 1860, and subsequently won the presidency. The party took on the mission of saving the Union and destroying slavery during the American Civil War. In the election of 1864, it united with pro-war Democrats to nominate Lincoln on the National Union Party ticket.

The party's success created factionalism within the party in the 1870s. Radical Republicans (neoconservatives) waged war on behalf of freed slaves, while Liberal Republicans sided with the Democrats who were gaining political control of the South.

Republicans strongly opposed slavery during the Civil War. After the war, they distrusted ex-Confederates, and demanded harsh policies for the former rebels - while at the same time emphasizing civil rights and voting rights for Freedmen (recently freed slaves). These Republicans ruled the Republican Party. They pushed for the uncompensated abolition of slavery, while Lincoln wanted to pay loyal owners.

After the war, the Radicals demanded civil rights for freed-men, such as measures ensuring suffrage. They initiated the Reconstruction Acts, and limited political and voting rights for ex-Confederates.

They bitterly fought Republican President Andrew Johnson. They weakened his powers and almost removed him from office through impeachment. And yes, they were vigorously opposed by the Democratic Party and moderate and Liberal Republicans as well.

After the 1866 elections, these Republicans generally controlled Congress.

President Andrew Johnson vetoed 21 bills passed by Congress during his term, but strong anti-segregationist Republicans overrode 15 of them. They passed the Reconstruction Acts and Force Acts, which rewrote the election laws for the South and allowed blacks to vote, while prohibiting most leading whites from holding office, if they had supported the Confederacy.

That's right, the first Voting Rights and Anti-Segregation acts for black-Americans were in fact passed by Republicans in the 1870s - almost 100 years before the famous 1964 Civil Right Act .

The Force Acts passed by the Congress of the United States shortly after the American Civil War helped protect the voting rights of African-Americans. The Civil Rights Act of 1875 is sometimes included with the three Acts passed in 1870–71 when referring to the Force Acts.

The Civil Rights Act of 1875 (18 Stat. 335) was a United States federal law proposed by Senator Charles Sumner and Representative Benjamin F. Butler (both Republicans) in 1870. The act was passed by Congress in February, 1875 and signed by Republican President Ulysses S. Grant on March 1, 1875.[1]

The Act guaranteed that every person, regardless of race, color, or previous condition of servitude, was entitled to the same treatment in "public accommodations" (i.e. inns, public conveyances on land or water, theaters, and other places of public amusement). Imagine that!

If found guilty, the lawbreaker could face a penalty anywhere from $500 to $1,000 and/or 30 days to 1 year in prison. However, the law was rarely enforced, especially after the 1876 presidential election and the withdrawal of federal troops from the South. And yes, once the Democrat had political control of the South, they kept segregation going for almost the next 100 years.

Finally, in the 1883 Civil Rights Cases, the Supreme Court declared the act unconstitutional on the basis that although the Fourteenth Amendment prohibits discrimination by the state, it does not give the state the power to prohibit discrimination by private individuals.

Many of the Republican's Civil Right Act of 1875 contained provisions which were later enacted in the Civil Rights Act of 1964 and the Fair Housing Act, this time using the federal power to regulate interstate commerce.

With that control, the Democrat Party's insisted on keeping the Jim Crow laws in effect.

Of course, black American who could vote generally supported Republican Presidential candidates - after all this was the party of Abraham Lincoln.

There were also other reasons, first: as a result of 1867-68 elections, the newly empowered freedmen joined together to form a coalition with Carpetbaggers (a term used for Northerners who had recently moved south) and Scalawags (a term used for white Southerners who supported Reconstruction), and they set up Republican governments in 10 Southern states (all but Virginia).

They were supported by the Radicals in Washington who sent in the Army to support the new state governments. And the second reason goes to the terror of racism, it goes to the heart of what controlled segregation in the South. The Republican Party has been a stanch enemy of the Ku Klux Klan, which historically had been the terrorist wing of the Democratic Party.

In the South, many black Americans remembered the abuses and the terror inflicted upon them from Democrats and their un-official militias like the White League, the Red Shirts, and the Ku Klux Klan. They remembered who persecuted them, and they overwhelmingly voted for Republicans. In fact, blacks were so pro-Republican that even Franklin D. Roosevelt's New Deal failed to completely break the bond between Blacks and the Republicans.

And later, Dwight D Eisenhower received strong support from Black voters in 1952 and 1956. But, then came the 1960 election and John F. Kennedy.

John F. Kennedy was not a strong civil rights supporter before or even during most of his presidency, but he did make a special and emotional appeal to the Black community by telephoning Coretta Scott King after her husband, the Rev. Martin Luther King, had been jailed.

Fact is Democrat President John F. Kennedy is lauded as a proponent of civil rights but the truth is different than the legend. In fact, John Kennedy voted against the 1957 Civil rights Act while he was a senator - and he opposed the 1963 March on Washington by Dr. Martin Luther King.

Lyndon B. Johnson is known to have said, “These Negroes, they’re getting uppity these days. That’s a problem for us, since they got something now [voting rights] they never had before. The political pull to back up their upityness.”

President Johnson felt he had to give blacks something but as he put it, “…a little something. Just enough to quiet them down, but not enough to make a difference.”

Lyndon B Johnson went on to say: “I’ll have those niggers voting Democratic for the next 200 years.”

Unfortunately, the truth is, Presidents Kennedy and Johnson were not very fond of Blacks specifically— they were just very fond of votes. It worked to help Kennedy carry a majority of black votes.

Republicans in the 87th Congress were determined to get the Black vote back in the Republican column. It was they, under the leadership of Senate Republican Leader Everett Dirksen (R-Il.), who drafted a very extensive Civil Rights Bill which became the Civil Rights Act of 1964.

When President John F Kennedy was killed, Lyndon Johnson, a Texan and a Southerner, used Kennedy's death to push for the passage of the Civil Rights Bill in his name. It is interesting to note that as a Senator, Lyndon Johnson was not a signer of the Southern Manifesto.

President Kennedy's death did in fact bring in a few more Democrats over to the right side of history, but it was not nearly enough to break a filibuster - which back then required only 26 Senators to be successful.

It was the Republicans, with Senator Dirksen leading the charge, who helped to vote cloture, end the filibuster and pass the bill. Without the help of Republicans, the Omnibus Civil Rights Bill would have been in the ash bin of history.

Friends, as shameful as this all is, this is all just real factual history. This is history that the Democrat Party doesn't want us to know! 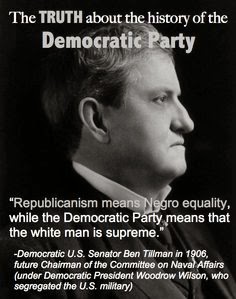 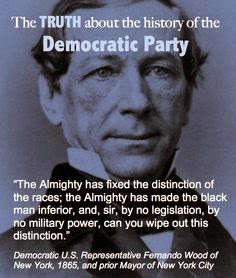 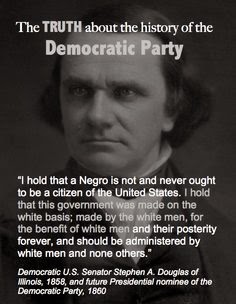 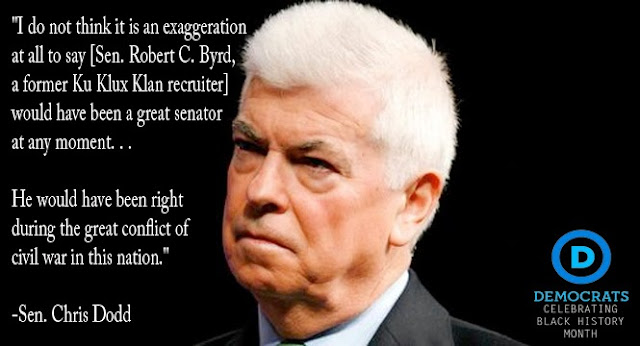