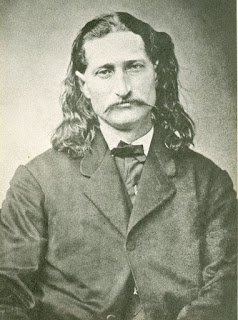 In the summer of 1869, James Butler "Wild Bill" Hickok was elected as interim County Sheriff of Ellis County, Kansas. The county seat is Hays City. Hays City is said to have been a rough town, and Hickok was more than willing to use his six-guns to keep things under control.


Hickok was elected city marshal of Hays and sheriff of Ellis County, Kansas, in a special election held on August 23rd, 1869. Three sheriffs had quit during the previous 18 months.


In August, 1869, Hickok killed Bill Mulvey in a gunfight. The following month he shot local gunfighter Samuel Strawhun dead after he drew on Hickok in Bittles Saloon.

The account below is the statement of Miguel Otero who witnessed Wild Bill Hickok's killing of Bill Mulvey. Otero said:

"I was an eye-witness to Wild Bill's encounter with Bill Mulvey, and shall relate the details as they linger in my mind. I was standing near Wild Bill on Main Street, when someone began 'shooting up the town' at the eastern end of the street. It was Bill Mulvey, a notorious murderer from Missouri, known as a handy man with a gun. He had just enough red liquor in him to be mean and he seemed to derive great amusement from shooting holes into the mirrors, as well as the bottles of liquor behind the bars, of the saloons in that section of the street.

As was usually the case with such fellows, he was looking for trouble, and when someone told him that Wild Bill was the town marshal and therefore it behooved him to behave himself, Mulvey swore that he would find Wild Bill and shoot him on sight. He further averred that the marshal was the very man he was looking for and that he had come to the 'damn' town' for the express purpose of killing him.

The tenor of these remarks was somehow made known to Wild Bill. But hardly had the news reached him than Mulvey appeared on the scene, tearing toward us on his iron-grey horse, rifle in hand, full cocked. When Wild Bill saw Mulvey he walked out to meet him, apparently waving his hand to some fellows behind Mulvey and calling to them: 'Don't shoot him in the back; he is drunk.'

Mulvey stopped his horse and, wheeling the animal about, drew a bead on his rifle in the direction of the imaginary man he thought Wild Bill was addressing. But before he realized the ruse that had been played upon him, Wild Bill had aimed his six-shooter and fired-just once. Mulvey dropped from his horse - dead, the bullet having penetrated his temple and then passed through his head."

As for the killing of gunfighter Samuel Strawhun, it's said that Strawhun was a gunfighter and an outlaw who returned to Hays City on September 26th, 1869.

Upon his arrival, he entered Bittle's Saloon with about eighteen cowboys, old friends, and soon they began to shoot up the place. Bittle fearing that they would destroy his place sent for Hickok, and when Hickok arrived all were outside loud and drunk. And yes, shooting at the moon.

The only good thing about drunks shooting at the moon is that sooner or later they do run out of ammunition. Unless of course you are not shooting and just waiting for a chance to enhance your reputation -- say by killing the famous "Wild Bill" Hickok.

It was situations like this that make me skeptical about the yarn that John Wesley Hardin spun about Wild Bill allowing Hardin to draw on him and  he supposedly just stood there and did nothing. But then again, it was only the word of John Wesley Hardin that we have to go on. And frankly, I'm not in the habit of believing psychopaths like Hardin.

As for Samuel Strawhun wanting to make a bigger name for himself? Well, witnesses stated that Wild Bill acted as though he had ignored Strawhun's threat that "I shall kill someone tonight just for luck!"

Hickok supposedly simply collected several beer glasses from the drunken cowboys and took them back to the saloon. Strawhun made the mistake of following Hickok into the saloon. One witness said that as Hickok stood at the bar, staring into a mirror, Strawhun threatened to break every glass in the place. Wild Bill's response was a firm but simple, "Do, and they will carry you out!"

Hickok used the bar mirror to watch Strawhun's movements, and when the gunman stepped behind him and reached for his pistol -- Hickok spun around with gun already in hand and fired twice before Strawhun cleared leather. Samuel Strawhun was said to be dead before he hit the floor.

Though both were deemed self-defense, the killings were enough for the good people of Hays City to became concerned by Hickok's behavior. Fact is many in Hays City were less than impressed that after only five weeks in office, Hickok had found it necessary to kill two men in the name of preserving peace and maintaining law and order. I can't help but wonder what they would have done if they were in Hickok's position. Their outrage over Hickok killing both men in self-defense makes me wonder if they would have been happier if Hickok were shot and possibly killed.

During the November election later that year, the people of Hays City expressed their displeasure with what they saw as Hickok's heavy handed law enforcement tactics. Hickok lost to his deputy Peter R. "Rattlesnake Pete" Lanahan, 144-89. So yes, to answer a question put to me by a reader, "Wild Bill" Hickok's was not a lawman very long at all. In fact, his first law enforcement position only lasted three months.

It sort of reminds me of what is taking place these days with the press and politicians forsaking peace officers and taking the side of assailants and would-be murderers. It makes me wonder if those folks back in 1869 would have appreciated a dead sheriff instead of dead bad guys.

Seems sort of harsh you say? That town was as tough as they came. Take for example what happened to Hickok's replacement. Looking at what happened there after Wild Bill left town tells us a lot about how tough that town was. When talking about Hays City, that's the rest of the story that no one seems to talk about. Historians seem to jump from Hickok losing the election and leaving town to his return in July in 1870 when he had his fight with a group of 7th Calvary troopers. But there is more to what took place in Hays City after the good people there found themselves with a new county sheriff.

That all has to do with when Peter "Rattlesnake Pete" Lanahan assumed his new position as Ellis County Sheriff in January 1870 after Wild Bill moved on. You see some of the rowdy crowd of Hays City were not to happy with Hickok's replacement, and immediately began to plot his assassination. Fact is "Rattlesnake Pete" Lanahan was marked for death as soon as he replaced Hickok. And no, it didn't take long for the scum to pull off their vicious plot. As I said, Hays City Kansas as a bad as they came.

It was on the night of July 16th, 1871, that several of those back-shooting assassins started a fight in Henry “Dog” Kelley’s saloon to lure Sheriff Lanahan into their trap. As most lawmen do, with honor and bravery, the Sheriff went running in the fray to stop it.

When Sheriff Lanahan arrived and attempted to stop the supposed violence, he was shot twice in the chest and left mortally wounded. The Sheriff was then taken to his quarters in the court house and tended to by a doctor, but he died a couple of days later.

If there was one comfort that Sheriff Lanahan may have had before he died, it was his knowing that justice was serviced for his murder -- even though he had to do it himself.

You see, Charles Harris, a local bartender who was known to consort with outlaws, thought he was going to get a way with murder but he didn't get away with killing the sheriff. Just before hitting the ground mortally wounded, Sheriff Peter "Rattlesnake Pete" Lanahan got off a shot that slammed into his killer's head.