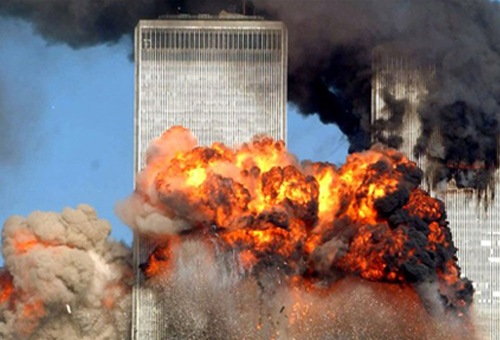 As with most in my family, my mother was born in Hawaii. She was only seven years old on December 7th, 1941. The day the Japanese bombed Pearl Harbor. But friends, she remembers it well.

On November 6th of this year, she will be 81 years old. Fourteen years ago, I remember my mother saying how she never thought she'd live to see the day when America would be attacked again.

For a while after 9/11, we were angry. And with that anger, there was a rise in national pride. Americans who felt helpless, but wanted to do something to show solidarity raised American flags everywhere imaginable. Liberal's in Hollywood and their counter part Comedians on television quipped and made anti-American jokes about it. But sadly for them, they were soon silenced when they found that American solidarity was stronger than their contempt for Americans.

Over the years since 9/11, Democrats have tried to lessen the significance of 9/11. They have played it down and have now granted American civil liberties to Illegal Aliens, some who are determined to try another 9/11. Yes, Liberals want to grant rights of citizenship to terrorists and murders.

To stop another surge in American solidarity, Democrats have tried to diminish national pride, to dampen the love for America, solidarity among Americans. All while attacking any symbol of America. This has been taking place so much so, that today Liberals encourage stomping on the American Flag as class projects in Liberal Universities. And yes, they do not see why it is important to strip Americans of their citizenship if they join a designated foreign terrorist organization.

Today, Liberals have encouraged dissent among races, rioting, looting, and division among our people at all sorts of levels. Liberals are trying to make Police Officers the bad guys, while trying to make no good criminal punks into heroes. All while Liberals seek appeasement with our enemies and support the very nations, Saudi Arabia and Iran, that support the very terrorists who perpetrated the attack on 9/11.

Since President Obama has been in office, he has openly supported Muslim terrorist attacks on American soil calling them everything but what they are. This has given rise to Muslim hate and violence in America. Liberals like Obama look the other way as it takes place.

Like my mother, I pray that I never see America attacked again. But I see Washington DC unwilling to fully secure America the best we can, and I see cowards on the Right and Left. I see Republicans who wanted to be voted in to secure America, but are not.

Yes, especially during the Obama Administration, I see Democrats supporting Radical Islam, Yes, Muslims wants us dead but Democrats either don't understand that or don't care.

I see people on the Right who have lost the courage to secure our ports and borders, all while the Liberal Left wants to give Iran the capability to make Nuclear Weapons. And yes, if that happens, we won't have to worry about a jetliner being flown into a building. If Iran gets Nuclear Weapons, cities will be decimated.

So yes, like my mother, I pray it never happens again in the life time of any American, But I do believe that Political Correctness and the Liberal Left in America is ensuring that another 9/11 takes place again.

On September 11th, 2001, America lost 351 Firefighters and EMTs, and 60 Police Officers, lost their lives trying to rescue victims of the World Trade Center attack. In all, the 9/11 attack by Muslim terrorists murdered 2974 innocent lives.

Let's get rid of the Career Politicians, especial Democrats who hate America. Or at least, let's bring in Term Limits and stop people from making being in Congress a Career. Then, maybe what happened on 9/11 will never takes place again.