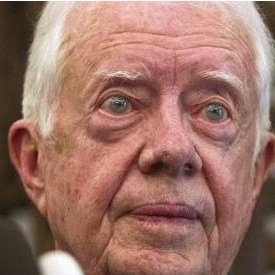 Former President Jimmy Carter has made it public that he has cancer which has now moved to his brain. Since my own father died from a cancerous brain tumor, I do not wish that on anyone.


Everyone who knows me, knows that I'm not a fan of Jimmy Carter. My lack of respect for the former president started when I was in the Marine Corps.

When I enlisted in the Marine Corps, I enlisted when President Richard Nixon was still our Commander-In-Chief. While I was in, I also served under Gerald Ford, Jimmy Carter, and later under Ronald Reagan. Frankly, from both the prospective of someone in the military and someone who entered the civilian world with Carter in office, Carter was a horrible President.

As for what he did to the nation's economics? While people do in fact forget, I won't. I will always remember the long unemployment lines for little to no jobs, the double-digit Unemployment Rates, the double-digit sky high Interest Rates, and the huge Inflation Rates -- all of which were plaguing our nation during his time in office. And yes, all of which he did not address.

I will always remember how that was in fact America's Last Real Economic Depression. Sure, while not as bad as the Great Depression of the 1920s and 1930s, it was the last time so many Americans were out of work at one time.

And frankly, while Democrat politicians always throw out the lie during every election where they are going up against an incumbent Republican of how  "the economy is the worse since the Great Depression!" That is a lie!

Fact: under Jimmy Carter, that really was the worse economic period in America since the Great Depression took place. Not even what is being termed today as the Great Recession of 2008 has it been that bad. And yes, his inability to care for America's dire economy while he focused mainly on Foreign Affairs was what angered the American people most.

And since Carter spend so much time on Foreign Affairs, the downfall of an ally in the Shah of Iran who was replaced by a 17th Century Islamic nutcase, and the lingering hostage crisis added to the image of Carter's ineptness.

When talking about what formed in the minds of many voters when thinking of his administration, in Carter's own words, the American people felt he was "impotent and incompetent." Yes, it sounds a lot like Barrack Hussein Obama.

But unlike with Obama, Carter's ineptness with dealing with the Iranian hostage situation only infuriated Americans even more. And yes, it would be an anger that was translated into one of the biggest election victories in American History for Ronald Reagan in 1980 and no second term for Jimmy Carter.

Want to know how bad it was for Carter, and how good it was for America? Yes, the Election of 1980 was an election victory that even saw the ultra-Liberal state of California go Red. It was one where Ronald Reagan won 90.9% of the Electoral Vote. And yes, the popular vote by more than 8 Million votes over Carter. 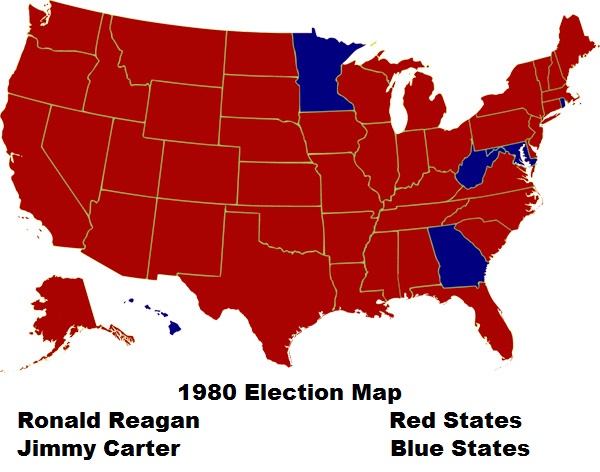 Since leaving office, his criticisms of Ronald Reagan and other Republican presidents as been scathing and has only helped divide us as a nation. Carter called Reagan "a boob". And yes, Carter hated that Reagan was once an actor. But all in all, what angers Carter to today is Reagan's popularity. That is true, especially when considering that Carter said that Reagan was "remarkably old in his attitudes."

Carter's absurd stance on world issues is demonstrated by his love of Leftist and Socialism and his hatred for Conservatives and those who expound the virtues of Capitalism.

While Carter has not been a fan of Conservatives and Capitalism, he has always been a fan of Socialism and even Communists. In fact, Carter has had a great admiration for Fidel Castro and his administration in Cuba. Yes, it's true -- all while neglecting to observe Cuba's violations of human rights there. During the Cuban boat lift, it is said that Carter knew that Castro would clean out his prisons and send them to the United States.

Another Communist state that Carter apparently has admiration for is North Korea. On North Korea's threat to use Nuclear Weapons against neighboring nations in Asia and against America, Carter said, "I don’t see that they [the North Koreans] are an outlaw nation."

And yes, believe it or not, he applauded Yugoslav Fascist dictator Marshal Joseph Tito, a ruthless man who declared himself Yugoslavia's "president for life". Carter even went so far as to say that the dictator Tito was "a man who believes in human rights." Of coarse Carter was talking about a man who committed all sorts of Communist atrocities in his lifetime.

If you want to know how Jimmy Carter looked the other way when it comes to the atrocities committed by Communist Dictators, remember that he said this of murderous Romanian dictator Nicolae Ceaușescu, "Our goals are the same: to have a just system of economics and politics. We believe in enhancing human rights."

Of course he was talking about a Communist system of control of education, healthcare, and housing administered by the government. Carter's comments about Ceaușescu were made a few years before the Romanian Revolution when the people rose up against a totalitarian government. Ceaușescu was executed for crimes against his people including genocide.

And yes, Carter told Haiti's pro-Communist dictator Raul Cédras, that he was "ashamed of what my country [the United States] has done to your country."

Carter is said to have been behind the Clinton Administration giving the former Haitian military strongman Cedras a $1 Million-plus "golden parachute" to resign and go into exile. The payoff included the Clinton's throwing in rental of three of Cedras' homes. Yes, it does seem strange that while Jimmy Carter may have liked Cedras, the Haitian dictator was described as being a "thug" and "killer" by his own people.

These things have only made most Americans question Jimmy Carter patriotism, and in some cases his intelligence -- nevertheless his sanity.

While his anti-Jewish sentiments are well documented, his pro-Muslim statements since 9/11 and his obvious hatred for Israel only confirms that he has never truly known who our friends are or what is good for America. In fact, over the years Carter has proven himself extremely anti-Jewish as he became a lobbyist for the Muslim world.

Carter has even accused Israel of War Crimes and demanded that the United Nations investigate Israel’s actions in Gaza while calling for Hamas -- a terrorist organization -- to be recognized as a legitimate political partner by Israel.

Fact is, Carter, like Obama, is not a friend of Israel. Both men are anti-Israel and cannot see that Israel is the one true friend we have in the Middle-East. Carter, like Obama, believes that we can trust the same Muslim nations who supported those who attacked us on 9/11.

Friends, some will call me callous and unkind for saying these things. But frankly, I don't want to see a white-wash of who Jimmy Carter has shown himself to be. I really believe that just because Carter has now been diagnosed with cancer, that that in itself is no reason to rewrite history and praise someone who doesn't deserve praise in the least bit.