Let's Talk About The Cowboy Code

Tuesday, September 22nd, was the first day that the Rail Road Flat Elementary School resumed classes since the Butte Fire raged through Calaveras County. Since my wife is a Master Gardener and volunteers at the school, today was her first day back since we evacuated from Glencoe.

To say she was very eager to get there today to meet the returning children is an understatement. While I believe writing, working with our horses, researching history, target shooting, and volunteering at our local American Legion Post are all great methods of therapy to lessen stress and feel good about one's self, my wife feels the same about gardening, line dancing, her cats, and volunteering at the Rail Road Flat school.

She arrived expecting the kids to join her in the garden, but today they didn't. Fore as much as those kids love the garden, watering, planting, and watching the fruits of their labor take shape, today the garden took the back seat to some other visitors. Yes, today the school had something special for the children. Yes, Firefighters.

Since Rail Road Flat was evacuated like most of central Calaveras County, many of the children were evacuated as well. Of the approximately 50 children who attend the school, yes this is a small mountain community, it is believed that 5 of the children lost their homes.

The three Firefighters that were there were two men and a woman. All showed the children how to setup and use the fire-hoses, actually letting each child work the nozzle, pull back on the handle and spray water.

After being thrilled with being able to feel how those great heroes feel when fighting a fire, they were shown different uniforms and learned how Firefighters train. The crew brought out a 40 to 50 pound backpack full of hose that they use for strength training to condition themselves to better take on steep hillsides and canyons as how they were tasked to do in the Butte Fire.

Each child went over to try to pickup the weighty backpack. All did lift it. Of course unbeknownst to them, a Firefighter reached over and gave a helping hand to the effort of each child. Yes, it's not surprising is it. After all, that is what they do. That is their nature.

And frankly, for those who feel the mammoth task of putting out this fire was easy and have some sort of angst with Firefighters and other emergency personnel. You should be absolutely ashamed of yourself.

Friends, while they were saving the homes of others, neighbors, family, friends, and strangers, the Butte Fire destroyed nearly a dozen homes that belonged to Volunteer Firefighters.

One such volunteer is Patty Raggio. She is a Volunteer Firefighter with Central Calaveras Fire and Rescue District. She lost her home in Mountain Ranch on September 11th. She and her husband called their place home for the past 17 years.

And where was she when her own home was going up? Well, she was seven miles away off of Jesus Maria Road fighting flames defending the homes of others. Yes, Volunteer Firefighters were so busy battling the Butte Fire that 11 Volunteer Firefights lost their own homes.

Friends, while the loss of your home is heartbreaking, even when those Firefighters found out that they themselves lost their homes, they did not stop doing what was needed because the fire wasn't over yet. They stayed out there and worked to protect those who had not lost homes yet.

My wife and I cannot thank them enough for their sacrifice. They made the difference and a lot of homes were saved. In fact, they saved our small community of Glencoe. So yes, when I hear some jerk complaining that they saw a Firefighter sleeping or that they saw a few standing around supposedly "doing nothing" -- I shake my head amazed at the lack of respect for those who weren't there to fight for their own home but was there for others.

And yes, let's not forget that Firefighters are still out there making sure flare-ups and hot spots don't again raise the head of this monster fire.

Thankfully, there is the vast majority out there that sees them for who they are and what they do. With that there is a push underway online to raise money to help all the local volunteer fire staff and personnel with Central Calaveras Fire who lost their homes. And yes, every bit helps.

Don't be shy to make any sort of small donation, the website is www.centralcalaverasfirefightersassoc.org

Last night on the way home from having dinner with my Mom, my wife and I stopped to see how things have calmed down at the Laughton Ranch where at their peak they saved well over 300 horses and all sorts of livestock along with cats and dogs. The Butte Fire brought out over a hundred volunteers and now there were but a handful left.

And yes, while some people believe that they are not needed now, places like the Laughton Ranch can still use volunteers to help during cleanup efforts there. Friends, frankly, though the skies are clear and the major effort to fight the fire has more or less passed, there is still so much work to do.

My friend Michelle Wood, yes my friend who volunteers at the VA and holds a job all while her own son battles Leukemia. Michelle is a woman like Bobbi Laughton who jumped in to help others by turning the Laughton Ranch into a Rescue Facility. Michelle is a woman who is motivated by the belief that giving to others is what people should do.

Michelle told me that she "just lives from my heart and do my part with whatever my day holds. I think life is about kindness and helping others. One thing I truly love about the VA is everyone I've worked with treats people the same. It doesn't matter if someone is in a suit or homeless. It is beautiful to see. We are all people."

Since the Butte Fire started, Michelle and a few others have been working to compile a list of Veterans who have lost their homes in the fire or are in need as a result of the fire.

She said, "With the fire, I think it is great how people are coming together to help. I made a road trip to Valley Springs with a woman I met through Facebook to take donations. Ends up she is an incredible woman with a huge heart and is doing all she can to help. She woke up to her house burning down as a child so it really hits home for her. The beauty in life is connecting with others."

Michelle is right, in fact my Grandfather taught me the same thing years ago when I was just a youngster. It is all about connecting with others to do good. And yes, while not seeking reward or acclaim of any sort while making a difference.

Like my wife who volunteers over at Rail Road Flat School and gets teared-up when talking about a boy who thanked the Firefighters today for saving his home, I too always get a sense of feeling good about the world when doing what my Grandfather taught me.

Whether Firefighters, Bobbi Laughton, Michelle Woods, or my wife really know it, they live the Cowboy Code.

Yes, they live the Cowboy Code that my Grandfather taught me so many years ago. It is a Cowboy Code that has been around for over 100 years and stretches to a time in the Old West when men and women lived by a moral code of honor. 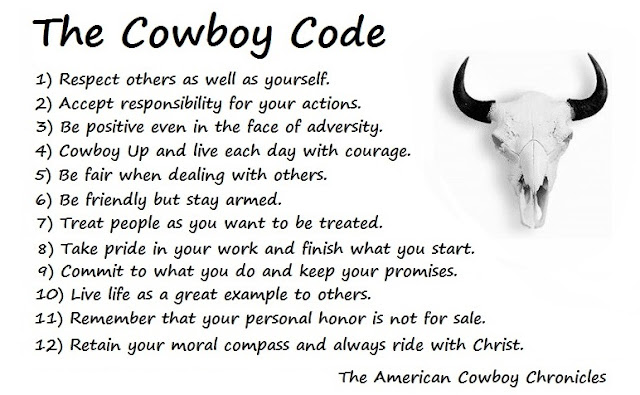 There will always be people who are blind to the big picture in life, blind to the efforts being made by others doing the hard job, those who put out and work tirelessly to do good, those who achieve and maybe come short in the process.

But frankly, people who live the Cowboy Code believe that we should connect with others, watch out for the next person, try to make sure that people get a fair deal, and that we should all live by the Golden Rule to treat others as we would like to be treated.

Yes, all of that is true. Cowboys face all of the hard work of keeping their heads above water. And while I know this, I was writing about the Cowboy Code, the Cowboy Spirit, the things that keep the values and ethics of the American Cowboy alive in America.

While Bobbi Laughton is the only real Cowgirl of all mentioned in this article, she being a combination of Mother Teresa and Annie Oakley, the Firefighters who took on the Butte Fire, Michelle Wood's steadfast determination not to allow a disease to conquer her son, my wife's insight into the feelings of others and yet her being very strong, all demonstrate the Cowboy Values.

It is "speaking soft but carrying a big stick". It is being honest and forthright, brave and true, loyal and loving. It is what is meant by the "Cowboy Way." It is what it means to "Cowboy Up," "Ride tall in the saddle," and "Take the bull by the horns."

It means walking the walk and not just be full of hot air. It means being thrown off but having the intestinal fortitude to get up, dust yourself off, and climb back in the saddle without anyone telling you that that's what you need to do. It is the resilient spirit that won the West and has made America great.

And yes, that's just the way I see the world as well.