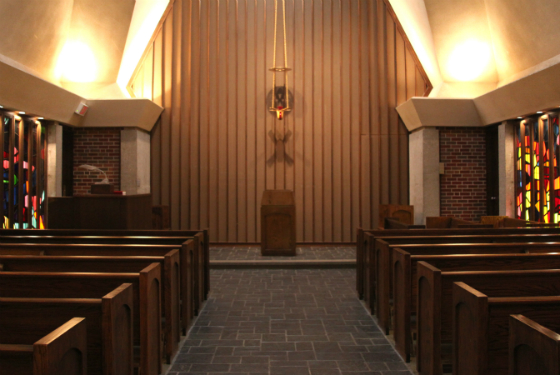 Do American schools prostitute themselves for Muslim dollars?

The Grace Memorial Chapel at Wichita State University (WSU) is located on the north side of the Rhatigan Student Center. It is said to be "one of the shining points of campus, and provides a great place for students to worship."

It was reported in early October that the Christian campus chapel was stripped of its pews and the altar and replaced by Muslim prayer rugs. University officials decided to make the chapel something they call "faith neutral,"

Believe it or not, WSU president John Bardo in a statement said his administration decided to convert the chapel into a facility "welcoming to all religious groups on campus."

University administrators ordered workers to remove all the pews and the altar inside the Harvey D. Grace Memorial Chapel last May, and Muslim prayer rugs and some portable chairs were then brought inside. This move was, according to Bardo, in compliance with the wishes of the chapel’s benefactor, Mrs. Harvey D. Grace, who in her Will wrote that "this chapel will be open to all creeds and to all races of people."

A reader who attends WSU sent me this information which said that WSU president Bardo has met the demands of the school’s Christian students and recently ordered a committee to study possible changes in the facility.

Bardo wrote in a public statement posted on WSU's website that he doesn’t think the "change was undertaken with enough consideration of the feelings of all elements of the campus and broader community."

In case WSU does know what a chapel is, allow me to give them the definition of a CHAPEL: A small church, or an enclosed place in a large church for worship by a small group, or a room in a building set apart for worship; a room that is part of a larger building; used for Christian worship as in "the ​college/​hospital/​prison has ​its own chapel."

While some call it a "renovation," others are calling it a complete change. By removing the pews and the altar inside the Harvey D. Grace Memorial Chapel last May, and instead putting in Muslim prayer rugs, the school officials there successfully took a ​building used mainly for ​Christian ​worship and changed it into a Mosque for only Muslims.

So why did WSU do it?

First, with a decline in enrollment, it is believed by some that WSU is doing exactly what other universities are doing in trying to lure more foreign students from the Middle East. Foreign students pay more to attend our schools.

Since Muslim students must wash their feet before praying, having foot-baths in bathrooms is another common accommodation on campuses, with two dozen public universities installing them so far.

Minneapolis Community and Technical College noticed that bathroom floors were wet from students washing their feet in the sinks, thereby leading to floor damage and students possibly slipping accidents so the university installed foot-baths.

Students at public universities objected to their tuition dollars being used for a particular religion, yet the university contended that anyone could use foot-baths to wash their feet. Also, the American Civil Liberties Union said that that foot-baths were necessary for Muslim students to practice their religion. You think the ACLU would fight for Christians that way? How about keeping Christmas a holiday on a school's calendar? No way!

Schools are accommodating Muslims by removing Christmas because Muslims are offended by the our Christian holidays, yet demand that schools observe two Muslim holy days, known as "Eid." Those are Muslim school holidays where Muslim students have day-long celebrations. Syracuse University in New York has made "Eid-ul-Fitr" an official school holiday on its five-year calendar to accommodate Muslims students there.

According to reports, Syracuse University's Muslim chaplain stated that since Easter and Christmas, two Christian holidays, were already on the school calendar -- why shouldn't "Eid?"

The school was forced into voting between no religious holidays or one additional holiday. The university voted to put Eid-ul-Fitr on its calendar. But now, now the Muslim students there want Easter and Christmas removed because those days are considered offensive to Muslims.

Other universities acknowledge Muslim holidays, while still holding classes on the two Eids. They allow Muslim students special privileges by allowing them to make up missed assignments and notify professors to avoid scheduling tests on the religious days. Imagine that!

By providing Muslims with the accommodations they are demanding, universities are prostituting themselves while making it clear that they will do anything for those foreign dollars.

So yes, money is what is believed to have a contributing factor behind the change of WSU's chapel.

The other reason has to do with politics. While Americans attending a university in an Islamic country would never dream of suggesting that a university there install pews and an alter in its Mosques to accommodate Christian students, that is not the case here.

Even at private Christian universities, Muslims demand the removal of crosses from rooms that they are in because they find the Christian cross offensive. Since the political winds favor Islam in America, and no one wants to get sued, universities and other schools respond by meeting the demands of Muslim students. And please don't think it hasn't happened, there have been many universities, including private universities, which have actually been sued to accommodate Muslim students.

The Muslims on campus have also published a petition in Wichita State University’s student-run news source The Sunflower, calling for the university to install Islamic plumbing -- specifically, handheld bidets in restrooms around the campus.

So yes, I believe WSU essentially bowed down to today's political pressure to discriminate against Christians in schools. By altering their chapel and refit it for only Muslim worship, they have shown a complete lack of respect for the vast majority of their students.

An editorial in a local paper there says that WSU administrators re-examining the removal of pews and alter is a slap to the face of the 1000 Muslim students there. It is not surprising that there was not even the smallest mention made as to how the 15,000 Christians on campus were offended or discriminated against.

And frankly, if I were a parent thinking of sending my son or daughter to a university, I'd rethink sending my child to WSU or any of these universities who prostitute themselves for foreign dollars.

Since I'd be paying big tuition money, I would certainly question the priorities and intentions of that university. And since WSU has shown its hand, I don't know if I'd send my child to a school that has demonstrated animosity for Christians just to bring in more Muslim students.

And yes, that's just the way I see it.
Tom Correa
Posted by Tom Correa at 1:34 AM