The Battlefield Cross -- An Option In The War Against Atheist

A reader sent me an article about Atheists attacking a Veterans Memorial in the Mid-West. While I wish they would simply mind their own business and go away, sadly Atheist attacks on Christian symbols and traditions in America take place all the time these days.

While there are those in our society today who scream that they are being persecuted if they are forced to take drug tests to qualify for government benefits or have had their feeling hurt by what someone has said, the two groups that are truly under attack in America are Conservatives and Christians.

Liberals see no restraint in making appalling claims regarding Conservatives, or throwing insults at Christians and our beliefs, but they know what groups are open season and what are not.

For example, since Atheists are primarily members of the Democrat Party, these same Atheist would never take on today's politically protected Muslims and their assault on our public schools. And yes, they even protect Muslims -- all while routinely attacking Christians. Yes, though Liberals believe in nothing other than control, they're not politically stupid.

Christians are targets in America these days, and Muslims have free rein to impose their sickness on our children in our public schools today with impunity. Yes, Muslims are exempt from punishment when it comes to imposing their religious rituals in our schools -- all while Muslims demand that our Christian greeting of "Merry Christmas" should be banned because it is offensive to them. Imagine that!

While Atheists give Muslims a pass, those same Atheists wage a constant war against Christians -- especially Christian symbols on city properties. For those cities worried about an Atheist group filing a billion dollar lawsuit over a Christian cross memorializing our fallen Veterans, here is an option.

Friends, a bronze Battlefield Cross can be obtained as a Veteran Memorial. And yes, though just the name of this memorial is enough to make an Atheist crap himself -- it has no religious connection!

What is a Battlefield Cross?

The Battlefield Cross, or Battle Cross, or the Fallen Soldier Battle Cross, is a symbolic replacement of a Christian Cross or marker appropriate to an individual service-member's religion, on the battlefield, or at the base camp for an American serviceman or woman who has been killed in combat.

It is made up of the soldier's rifle with fixed bayonet stuck into the ground, with helmet on top and dog tags are sometimes placed on the rifle, and the boots of the dead soldier can be placed next to the rifle. The helmet and dog tags signify the fallen soldier, their name never to be forgotten. The inverted rifle with bayonet signals a time for prayer, a break in the action to pay tribute to our friend, our comrade, our brothers and sisters in arms. Their combat boots, worn and dirty, represents the final march into their last battle. The purpose is to show honor and respect for the fallen.

In years gone by, it was to mark the exact spot where a soldier had fallen. The practice actually started during the American Civil War, although some say maybe earlier, as a means of identifying the bodies of the fallen on the battleground before they were removed -- if at all. Back then, other than mass graves, fallen soldiers were more than likely buried right where they lay, often by opposing forces, with crude markers being erected and sometimes replaced.

It was during the later days of the Civil War that soldiers began to be sent home for burial or buried in an area designed to be a cemetery near their battlefield. After a battle was over, people would move through the battlefield to mark the bodies which hopefully would be recovered.

Those were the days before dog tags which became a common issue later. Soldiers were known to write their names in their uniforms or stick pieces of paper with their names on them in the hats and pockets. To mark the spot of these honored dead, the most convenient marker would have been a soldier's rifle with its bayonet stuck into the ground with his hat placed on top.

During World War II, as units rapidly advanced, Soldiers and Marines would often bury the bodies of their fallen comrades in shallow graves. And yes, they used the time honored tradition of placing a rifle with bayonet fixed into the ground and a helmet on top to indicate that there lies the remains of an American fighting man. In most cases, one of the two issued dog tags would be left secured to the rifle.

Later, graves registration units would follow behind and go through and attempt to recover the remains for proper identification and burial. Over time, the image of a Battlefield Cross has come to be associated with the loss of a comrade and loved one in combat.

During Operation Iraqi Freedom and Operation Enduring Freedom, there were many units erecting Battle Crosses to commemorate the loss of their comrades. Since they could not attend the funerals of their fellow soldiers, some units made a habit of paying tribute at the Battlefield Cross. It should be noted that the Battlefield Cross has now come to be used as a poignant reminder of the cost of war.

Besides the Battlefield Cross being an immediate means of showing respect for those killed in the service of our nation, it is a reminder that freedom is not free.
While the Battlefield Cross itself is not an official military honor, it is an unofficial honor of sorts as it does play a part in the memorial ceremony as a visible reminder of fallen American soldiers, sailors, airmen, and Marines. And again, while it is not officially recognized, many unit commanders have recognized the value of the memorial.

In an era when Christians are under attack even in our military, Unit Commanders are known to encourage members of their units to pay their respects to fallen comrades and sometimes hold ceremonies at the site of a Battlefield Cross memorial. And as a matter of ceremony, after a set period of time, the memorial is respectfully dismantled with the components being returned to the unit for appropriate disposition.

Among the companies that make these wonderful pieces of art which are very fitting memorials to our fallen heroes, there is a company called ICON Statues which specializes in sculptures for schools, hospitals, churches, city centers, corporations, and other businesses.

While I have seen the Battlefield Cross sculpture in the small town of Ione, California, below you will find the most inspirational Battlefield Cross that I've ever seen. To me, it captures the lost felt by a loved one and the honor given by his comrades in arms.

When I first posted this article, I did not know where this is located or who the artist was. That mystery is now solved. The artist of this incredible piece is Richard Rist of Baltimore Maryland. His company is The Large Art Company which can be found at www.LargeArt.com in his section Veteran Memorial sculptures.

God Bless this great artist for capturing such a touching moment. 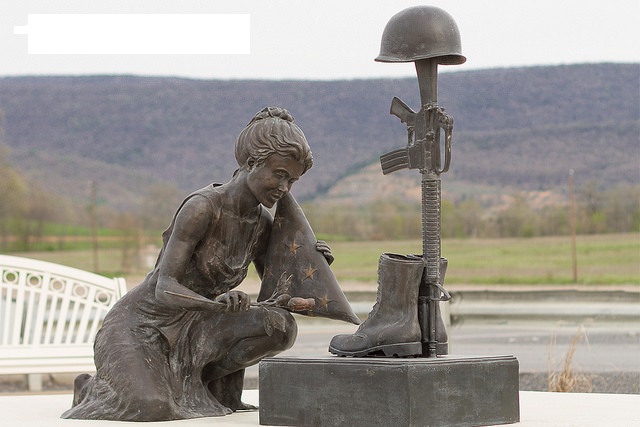