President Trump Has Been A Victim Of Media Harassment 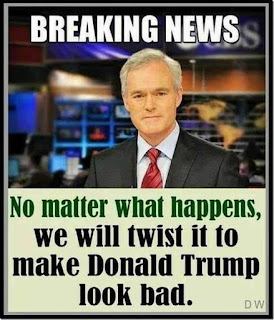 Actions that we see today by the news media is not new. George Washington was attacked in the newspapers to include spreading lies about the president.

During the Civil War, Copperhead Democrats who ran newspapers in the North attacked Abe Lincoln mercilessly to include calling for him to reestablish the Union with the South holding on to its slavery.

President Lincoln actually jailed an editor or two for spreading false information, fake news, and deported one Southern sympathizer to the South. Not even the South wanted him and he left for Canada.

The Democrats fought to keep slavery intact and the Democrat controlled newspapers called for Lincoln's assassination. Some believe disgruntled actor and pro-slavery Democrat John Wilkes Booth was incited to murder the president by newspapers of the times.

There has been a general adversarial attitude between the news media and the White House. Some folks can make the case that the news media has also believe that they tell people what to think and don't like it when the President screws with their message.

But in modern times, the partisan attacks by the news media has been blatant. Ronald Reagan was treated horribly, as was George H. W. Bush and George W. Bush.

There is no denying that the media gave Bill Clinton a pass, especially when it came to his presidential conduct, sexual harassment, having sex in the White House, even his being accused of rape. They ignore or went to bat for him over most of what took place even though those were all things that have gotten people fired or put in jail.

But not even Bill Clinton was treated with the love that Obama received from the news media. Chris Matthews fawned over Obama to the point that Matthews said he had a physical reaction to listening to Obama speak — a tingling up his leg.

In contrast, even Democrat former-president Jimmy Carter has come forward to say that President Donald Trump has been treated the worse of any president in his lifetime. False accusations, attacks, allowing Democrat politicians to call for his assassination, making lite of people making threats against him, people mocking him being shot, stabbed, or being beheaded.

A great indicator of how he was treated versus how the media treats Trump can be seen in the number of retractions that were made while Obama was in office versus since Trump has been in office. There have been multiple retractions that have been made of false information since Trump has been in office. Once those stories are out there, how many people ever read the retraction stating that the report was wrong or simply false? Few if that.

The deed to smear and attack is accomplished.

In contrast, there were zero retractions of false information while Obama was in office. The news media did not print of produce anything that may be construed as not positive. Some say it was so the media did not appear racist. Other say it was because the media covered for Obama. You decide.

For me, I believe President Trump has certainly been a victim of unfounded media attacks. The bias demonstrated by news outlets such as CNN, MSNBC, ABC, CBS, NBC, NPR, and print news such as the New York Times spreading out and out lies is horribly blatant. The news media today doesn't even make a pretense of being non-partisan. Like Hollywood's Late Night television hosts, the news media doesn't care who know they are working for the Democrat Party.

While Democrats need a divided nation to retain power, the political partisanship by the media, as well as its harassment of President Trump has gotten out of hand. So much so that I'd like to see laws preventing their sort of slanderous attacks.