Why Should Medical Coverage Be Completely Free? 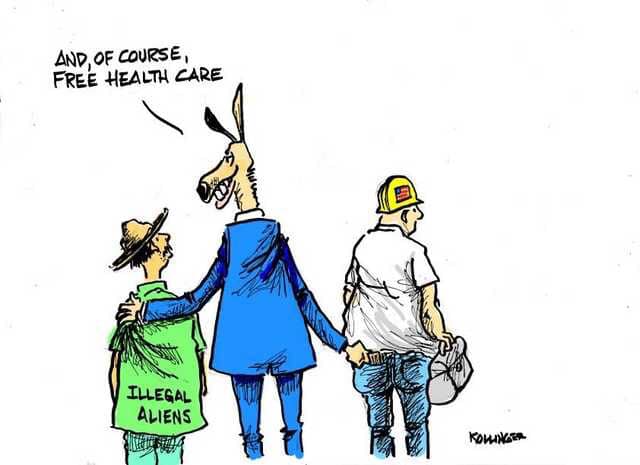 I was recently asked the question, "What types of compromises, as a Conservative, would you need to see in order to consider a Single Payer health system?" Single-payer healthcare is defined as “universal healthcare financed by taxes that covers the costs of essential healthcare for all residents, with costs covered by a single public system.”

I translate that to mean that taxpayers supply others with free medial coverage.

That means that more taxes will be taken from working Americans of all economic levels to pay for “everyone” — even those who can afford to get their own healthcare. This doesn’t sound fair to working Americans and retired Americans on a fixed income who are already paying more in taxes and are having less and less to live on because of the government wanting to take more and more of what they have.

As for those who need coverage but can only afford expensive all inclusive healthcare plans, here’s my solution based on my own experience when I was in that very situation.

Back in 1995, I needed medical coverage. Being a Veteran, I went to the VA to see if I qualified for coverage and how much it would cost me. The first thing that the VA did was give me a “Means Test” to see what my financial situation was at the time. I was told that such a cost to me would help to defray the expenses and lift the burden of cost on the taxpayer to pay for the VA healthcare program.

While I don't know if the VA still does this today, at the time if I made too much money -- then I wouldn’t have qualified for coverage. That caveat stopped well-off individuals from taking advantage of the system. As for me, though I thought I was making a lot of money while I was working in the Inspection Industry at the time, I did in fact make an amount that met the criteria. For my situation, it was determined that my visits would cost $60 (per visit). Prescriptions cost me a minimal fee.

Point is, since there was zero monthly out of pocket expense, and would only cost me $60 per visit — which I figured would only take place 3 to 4 times a year for follow-up appointments — I jumped at it.

So why can’t Americans who cannot find medical insurance apply for Medicare, but go through the same process of a “Means Test” to see how much, how little, they will have to pay to get basic coverage as I did with the VA back in 1995? No simply give it to them free, but at a minimal cost?

Fact is $60 in 1995 is equivalent in purchasing power to about $100.84 in 2019. If a person today only had to pay $100 per visit and only went to the doctor’s six times a year, that’s affordable basic coverage for those who can't get more expensive care. Couple that with an inexpensive supplemental plan to cover the more expensive treatments, and people may be able to afford it.

Also, back in the late 1990s, Kaiser Healthcare System raised it's Emergency Room visit costs from $5 to $50 a visit. That raise reduced the frivolous visits and those not wanting to schedule an appointment and get around more expensive co-pays. Soon, Kaiser Hospital ERs were a lot less crowded with people their simply trying to fill prescriptions. The lesson was noticed by all, make it almost free and people will take advantage of the situation.

Also why can’t people afford to pay for such a “basic coverage” government program if we made that sort of minimal coverage available to people who cannot yet afford to get into other private healthcare coverage programs? Obamacare actually cost more than what I'm suggesting because there is no monthly premiums in my suggestion.

Also, why does it always have to be a case of taxpayers putting out more of their wages to supply something to other completely free — especially when those who have very little coming in can afford to pay a minimal fee to a government program? It doesn't have to be that way.

Why should it be completely free for people who can afford minimal coverage? It shouldn’t be. And where did people get this absurd and asinine notion that "Healthcare is a Right"? It isn't a "right." That's especially true since it's not the government's responsibility to see that you're looked after like the slave masters looked after their slaves. Besides, our healthcare is up to each of us to take care of for ourselves.

And if you're wondering, no, I don’t think healthcare coverage should be completely free for anyone with the exception of Veterans with service-connected disabilities, since they got their disabilities while serving us, and in the case of Seniors on Social Security since they paid into the Social Security system all of their lives.

Besides, there is no such thing as "free" since someone has to pay for it. And while some will say that I should have took whatever I could get from the government since I paid such high taxes, I liked knowing that paid what I could to help defray the cost of my medical coverage. Knowing that nothing's completely free, I liked that. After all, I am the taxpayer who funds these programs.