What Made Me A Republican 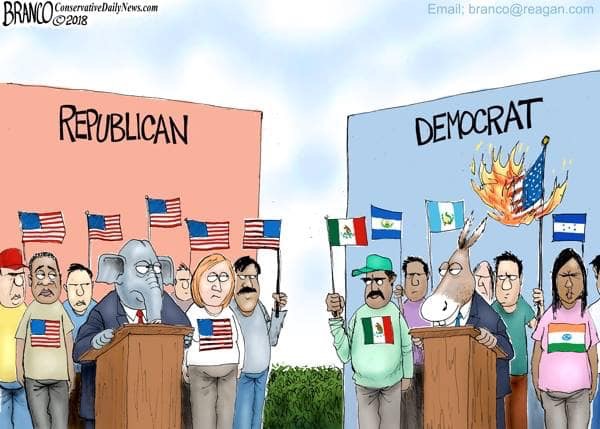 I was recently asked what changed my political opinion once and for all?

My maternal great-grandfather left the oppression of the Portuguese government in the Azores to go to Hawaii as an Indentured Servant in 1908. During his life, he worked in the sugarcane fields, the pineapple fields, and as a janitor at a High School. He tried to pass the citizenship test to become an American on three different occasions but couldn’t speak enough English to pass it. As a boy of 9, I remember him telling me, in Portuguese, to be a proud American. He used to say, "Be proud that you are an American. You are free!"

As for my becoming a Republican and shunning the Left and Liberalism? While I was raised a Conservative with traditional family values in a Catholic family, my decision to become a registered Republican came while I was in the Marine Corps.

If memory serves me right, myself and three other Marines volunteered to go to San Diego State University to attend a few hour long career day event. That took place in early 1976. I was an Instructor and my Gunnery Sergeant told me that it would be good for me to do since I was looking at the Marine Corps as a career. As is still probably the care, anything positive on one's record helps out during promotion time.

I was a 20 year old Marine Corporal, and after we arrived, I was shocked by how we were treated when we arrived. We go out of our van and were met by college students who threw food at us, called us all sorts of vile names such as calling us “baby killers” and compared us to Nazis. A few students actually tired to get close enough to attempt to spit on us.

I didn't know the other Marines since I had just met than that morning. If I remember right, we had a Lance Corporal who was our driver from Motor-T, I was the only Corporal, there were two Sergeants, and we had a Staff Sergeant in charge. When we arrived, we told the Lance Corporal to stay with the van. We tried grabbing up a banner and handouts, but the students sort of swarmed around us and kept throwing stuff and taunting us.

At one point, the Staff Sergeant in charge told us to get back in our van. He didn't want things to get completely out of hand but he need to check in the people who organized the event. With that, he told us to sit tight and he left. When he got back, his uniform was a mess. He simply got in the van and told the driver to get us out of there.

On the way back to Marine Corps Base Camp Pendleton, all of us were pretty angry. I found out later that the students who met us with such disdain and disrespect were the same Leftist students types who protested our troops returning from Vietnam; the same types of asinine individuals who burned our flag while waving the flags of our enemies; the same as those who were praising Communism of Mao and Stalin; the same who wanted a Communist America; the very people who voted for McGovern in 1972 and were campaigning for Jimmy Carter at the time. They were Democrats.

It was then that I decided never ever to vote for Democrats.

While my father was still a true-blue Democrat until Bill Clinton was caught lying about committing perjury regarding having sex in the Oval Office, I refused to vote Democrat for years before that.

Republicans are for families, child welfare, for life and not killing babies both before or at birth, manufacturing, building trades, Christians no matter if Catholic or Protestant, supporting our troops serving and helping our returning Veterans. Everything that Democrats are against.

I find it ironic that Democrats accuse Republicans of everything that they do or have done in history. They were responsible for the Trail of Tears, the Civil War, and the have a slave-owner mentality. They created the Ku Klux Klan, Jim Crow laws, Segregation, worked to stop multiple Civil Rights legislation efforts, they even fought against the Civil Rights Act as recently as 1964. And yes, they have a history of being against Women's Rights.

The irony in recent years is that Democrat President Obama refused to pay his women staffers what he was paying the men in that administration doing the same job. Recently, Democrats running for the presidency were caught doing similar things.

Over the years, I've found that the Republican Party is all about respect for our elders, our traditions, our history, our flag, and preserving our values. As a Republican, I can say that we are for equal opportunity, free association, capitalism, commerce, and the benefits of hard work, low taxes, and prosperity.

We like to keep more of our hard earned money in our pockets. And though that's a fact, Republicans give more to people in need than Democrats do. Why is that you ask? It's because Republicans believe people take care of people. In contrast, Democrats don't give to charities because they believe it's the government's job to do that. If that seems like a cop-out, I think so too.

In recent years, Democrats created another militant arm of their party. They did in 1865 with the Ku Klux Klan, years later they formed Occupy Wall St, and since 2016 they created ANTIFA to riot and destroy and attack others in the streets. In contrast, Republicans believe in stability, peace, and supporting our law enforcement professionals.

While Democrats are fighting to keep our Southern border with Mexico open and unsecured, drugs and human traffickers are bringing people across the border as never before. Republicans are for freedom and opportunity, but also the rule of law which regulates those coming into our nation. No one is against a family fleeing somewhere else and coming here. All Republicans are saying is to do it legally. Not as criminals, but with the proper papers.

Whether it's sex trafficking or human bondage which is nothing more than modern-day slavery, Democrats should be concern but they are not. And frankly, Americans should demand to know what not?

Republicans respect an individual's right to pick the religion of their choice or simple their being spiritual. We respect a person's right of association as long as it promotes peace. Democrats can't say the same. Traditionally, Republicans have been the champions of limiting government to rein in abuse and even the possibility of government oppression while promoting the general welfare. We have be for a strong military deterrence, for civil rights, respect for others, and a color blind society. Democrats want open borders, a return of segregation, a divided nation, racism, and hostility for Whites.

Unlike Republicans, Democrats do not believe in assimilation, pride in being an American, inclusion, respect for the law, and a nation of united on common values. Republican ideas of free expression, equality under law, due process, the presumption of innocence, good ethics, conscience, and a person's right to self-preservation is at odds with what Democrats believe in.

So really, what made me a Republican?

Being self-sufficient, and wanting a normal family where my kids would learn to respect our founding fathers, our flag, our Constitution, our history and struggles; my wanting to stay safe while keeping the freaks and bad doers away; my wanting to preserve our Rights, and not be prejudiced from having the same opportunities of fulfilling my dreams as those with lighter or darker skin; my wanting to be associated with other proud Americans made me a Republican.

After all, I couldn't be a Democrat after finding out at the age of 20 that the Democrat Party did not represent me, my family, Blue Collar workers, Catholics, Veterans, our flag, what's right about America, and had turned into a bunch of Communists. Yes, even back then.

Conservatives need to understand that we have to fight as ruthlessly as Democrats if we want to prevent them from tearing down America to create a Communist nation in its place.

If Republicans embrace Socialism, Communism, want to repeal parts or all of the Bill of Rights, actually believes that a person has absolutely no right to protect themselves or their family with a firearm? If there is ever a Republican Party that supports the idea that it’s okay to rule over others with draconian regulations, supports the concept of us being slaves to the government, supports the elimination of private property, and supports the killing of babies yet will fight to save a murderer on death row, then that’s when the Republican Party becomes like the Democrat Party. And yes, that's when it will no longer get my support. But until that happening, I will remain a Republican.


I remember talking about this with friends back in the mid-1970s. We wondered what cars and clothes would look like, and what sort of new "stuff" there would be. Back in those days, when I was overseas in the military, a few of the guys used cassette tape recorders to record their letters home. They would record themselves, put the cassette tape into an envelope and then sent them home by airmail — what is called “smail mail” today. That was big technology for the time.

Never did we image computers, the internet, being able to chat with people in group discussions, phones that you carry around in your pocket, watching films and video online, and more.

As for race relations, by the late 1970s, I thought it was getting better. For many years, a lot of people thought we were all getting along pretty well. The Obama administration changed all of that by calling everyone a "racist." Obama returned the nation to the dark days of segregation. His legacy today is that some blacks are actually calling for segregation.

It's a safe bet that Rev. Martin Luther King Jr. must be rolling over in his grave since he fought so hard to end such horrible practices.

As for the future, I hope the Democrats come to their sanity and stop the true racism which they are inciting, stop the political hate which they are encouraging, stop ANTIFA which they created, stop putting others first before Americans. While I really don't think we'll become the Socialist Third World country that the Democrats are trying so hard to turn us into, I hope I'm right.