On the 12th Anniversay of the Muslim Terrorist attack on America, we watched more than a million modern day Minutemen and women bikers descend on Washington DC.

Patriotism was in full swing as we remembered and saluted the victims of 9/11.

We didn't hear much at all out of the Million Muslim March.

Come to find out, maybe a hundred or so signed up, but only a handful showed up.


The back story on this is that a Muslim group wanted to make the 12th Anniversery of the 9/11 Attack as a Civil Rights march for Muslims.

They labeled their event as the Million Muslim March, but when that went over like pork chops served at a Mosque for dinner - they changed it to sound more politically correct.

But hey, whatever name they gave it - everyone understood that it was going to be a celebration of what took place on 9/11.

It was certainly not going to be American or Patriotic.

When a few bikers from the Northeast heard about that, they had other ideas.

The groups organizers, Bill Williamson, Belinda Bee, and John Mullins, did an incredible job keeping the public informed about the ride – for the bikers, and for those of us who can’t be there but wanted to show support.


If they could help it, our nation's leaders will get a reminder that Americans who will never forget the worst terrorist attack on American soil - and that we still wait for answers about who is criminally at fault for Benghazi.

While the Muslims applied for a permit to rally but not to be freed of traffic controls.  The biker group was refused a permit. 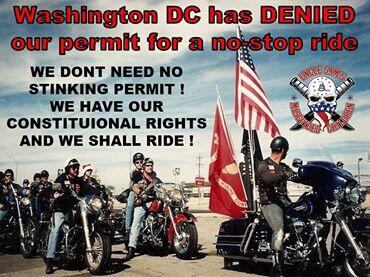 As strange as that was, that didn't stop the those Patriot bikers from showing up yesterday.

Sure, the group of bikers had been denied a no-stop permit for its planned "2 Million Bikers to DC" ride to commemorate the 12th anniversary of 9/11 Wednesday which meant that they could still ride through the capital - but they had to obey traffic signals and signs.

Or so they told them!

The bikers' rally generated a lot of buzz on social media, with thousands vowing to ride through Washington to "remember the victims of 9/11 and to honor our armed forced who fought those who precipitated this attack," according to the group's Facebook page.

The ride was also meant as a response to the Million Muslim March, a movement organized by the American Muslim Political Action Committee (AMPAC) in an effort to show Americans that Muslims denounce terrorism.

Message from the Muslims

"On 9.11.01 our country was forever changed by the horrific events in New York. The entire country was victimized by the acts done on that day," AMPAC said in a statement.

"Muslim and non-Muslim alike were traumatized but we as Muslims continue 12 years later to be victimized by being made the villains. To this day every media outlet and anti-Islamic organizations have committed slanderous and libel statements against us as Muslims and our religion of Islam."

My response to that!

Where have you Muslims been for 12 years?

Fact is, there has been no condemnation from any of the Islamic nations in regards to either attack.

Instead, we have President Obama who came to office, bowed to their Princes, kissed the rings of the clergy, and gave away Billions of American Dollars which are certainly needed here more than there in those Oil Rich barbaric countries who hate America and all we stand for.

Over a year has gone by since the fools that we have in the White House failed to send military help like the Marines into Libya Benghazi to support our Americans there.

Instead, they let them die after a 10 HOUR battle!

The day before 9/11, the same President Barack Hussein Obama had the nerve to tell America that it is our responsibility to attack Syria on behave Muslims with ties to the very people who attacked up both on 9/11 twelve years ago and last year.

Obama's step-brother is an organizer for the anti-American terrorist group the Muslim Brotherhood, and is the very same American president who takes vacations every few weeks and gives away Biilion upon Billions of our taxpayer dollars to Muslim nations who harbor terrorist and want us dead.

Isn't it strange, yes queer, that Obama has found assets to attack Syria on behave of a group that has ties to Al Queda.

Isn't it strange how he now has the committment to go  to war to help someone.

Where was Obama when Americans needed him to go to war for them?

And youknow what, that's a damn fine question, where was he when that all came down a year ago?

Fact is, a year has passed and we still don't know the whereabouts of President Obama on the night when 4 Americans were under attack and needed help from Marine quick-response teams only a few hours away.

Why is it he wants to go to war for Muslims but not Americans?

Back to our Hero Bikers!

The "2 Million Bikers to DC" organization was denied a no-stop permit from the city, which meant it would not be allowed to ride through red lights or stop traffic.

"Washington DC has DENIED our permit for a no-stop ride through Washington DC. We find this regretful for the residents and businesses of that great city, and humbly offer our apologies," the ride's organizers posted on the group's Facebook page last week.

"What could have been a one or two hour ride through will now likely be an all-day event. We will be obeying all laws. We will be stopping at all stoplights, stop signs, and yielding to all pedestrians."

The denial didn't mean that the group was prohibited from riding, though that's how many on Twitter took it.

And yes, they rode in anyway!

The group said in a statement Sunday that D.C. officials denied their request for a special nonstop ride through town with a waiver for red lights, stop signs and other traffic signals.

“What could have been a one or two hour ride through will now likely be an all day event,” the group said.

Denial of the permit sparked outrage on the biker group’s website because the District of Columbia reportedly had granted the American Muslim Political Action Committee a permit for the Million Americans Against Fear rally, formerly known as the Million Muslim March, for Wednesday on the National Mall, the PAC announced Saturday.

BizPac Review pointed out that the Muslim advocacy group also announced it had received a commitment from Rep. Emanuel Cleaver, Missouri Democrat, to speak at the event.

The 2 Million Bikers to DC group offered an apology to D.C. residents, who will undoubtedly be disturbed by the noise.

“We did the right thing and went through the proper channels to secure a no-stop permit to ride through your great city,” the groups said Sunday.

“We wanted to ride an established route, which would have taken us past the Viet Nam Memorial to the Lincoln Memorial, across the bridge into Virginia, and that’s it! We would have been completely out of Washington DC, and your city would have been back to normal.”

The bikers planed to meet at the Harley Davidson in Fort Washington, Maryland, on Wednesday morning, where they will had opening ceremonies, blessings, the Pledge of Allegiance and a handful of speakers.

Up until yesterday morning, the final route has not yet been announced “for security purposes.”

“We ride to pay tribute and offer respect to those that lost their lives on that day 12 years ago, and to salute our troops engaged in the War on Terror. Riders!…we are the best of the best in America!! Our love for these people and this country is staggering, and we will make a display of Patriotism and solidarity America won’t soon forget!!”

And that they did!

Driving in from Canada and from all over the United States, the bikers, who were denied a permit for their demonstration, were flooding the capital.

At approximately 1 p.m., “2 Million Bikers to DC” Facebook page co-founder Belinda Bee posted that police have counted nearly 1 million bikers are on the streets of Washington.

The name of the “Million Muslim March” was changed to the “Million American March Against Fear” because organizers said the original name proved too “scary.”

In fact, The American Muslim Political Action Committee was criticized for scheduling the march on the anniversary of 9/11.

Organizers refused to change the date of the march, which marked 12 years since the attack by 19 Muslims on New York City and Washington.

“September 11th, 2001 was the beginning of a new era of fear,” the organizers insisted. “Since 9/11, Americans have been terrorized by the media.”

The Huffington Post reported: “Organizers at the group American Muslim Political Action Committee (AMPAC) didn’t exactly do a lot to engender sympathy for an event held on one of the most emotionally charged days of the year. The group is led by M.D. Rabbi Alam, a professed 9/11 truther who has pushed controversial anti-Semitic conspiracy theories about the attacks. AMPAC’s plans outraged conservative outlets earlier this year, though many cited the religion of the organizing group, rather than the fringe beliefs behind the event.”

The bikers, meanwhile, have stated their opposition to President Obama’s push to “fundamentally transform” the U.S.

Radio giant Rush Limbaugh said Wednesday the American public as a whole did not understand what Obama was intending to do when he campaigned in 2008 with that remark.

There is a major difference in the Facebook pages for the two 9/11 events.

The Million American March Against Fear page has a paltry 295 Facebook likes and had not posted any photos of their rally as of 2 p.m.

But on the 2 Million Bikers to DC Facebook page, there were 196,000 likes, and many photos of the bikers rolling into the nation’s capital.

If you want to know what it looked like, here you go!

God Bless each and every one of those bikers and their families. They truly are Patriots! Too bad I can't say the same for the President who ignored them. Like the man holding the flag as you ride by, I salute every one of you.