Oil Is More Than Just Fuel - And We Don't Need Obama

Some of you have asked if I could take this information from a RANDOM SHOTS article that I did in March 2012 and publish it as a stand-alone article? Well friends, here it is.

Oil Is More Than Just Gasoline: There Are Consequences For Not Drilling Right Here Right Now!

That was an article in the news in March 2012, it was reported that more people are buying cars and using more gas around the world than ever before.

Countries that traditionally did not use cars and depended on bicycles and such are now moving to more and more cars. This growth in the global economy increases the demand for fuel, while oil supplies are projected to get tighter from the Middle East sources. Between the oil used for fuels such as gasoline and the oil used to manufacture consumer products, the world desire to be consumer driven is using more and more oil.

"China was at 5 million barrels a day in 2005. Today, they are at 10 (million). By 2015, they are going to be at 15-million-barrels-a-day demand," said John Hofmeister, founder of Citizens for Affordable Energy. "That's 10 million new barrels over 10 years. India is going from 4 to 7 (million) in the next three to four years."

President Obama seems to recognize the coming explosion in demand, but he has a different solution for the problem of more demand and less oil. Do nothing! Yes, Obama wants to do nothing in the way of more drilling to tap into our abundant natural resources.

Even though currently the United States consumes 19.6 million barrels per day, and demand will rise, Obama argues that more drilling and the Keystone XL pipeline are not the way of the future. Instead, he wants to wean Americans off of oil entirely by turning to alternatives energy options like electric and hybrid cars, solar and wind power - and what I call his "AOTO" philosophy.

AOTO is not a tribe in Kenya, it is a Liberal train of thought. No matter how high gas prices at the pump go, "AOTO" is the mantra from the wealthy Liberal Left. AOTO" is the acronym for "Anything Other Than Oil."

"And we have a capital stock of hundreds of million of vehicles," Guy Caruso of the Center for Strategic and International Studies said. "So these types of transformations take decades and maybe even 50 to 60 years."

Last year, obviously because it was an Election Year, Obama talked about oil drilling as if he were for it. Imagine that! Like a true double-talking politician, Obama was telling Americans that he was cutting red tape and issuing all sorts of oil permits for companies to get to work on Federal lands.

Obama was lying to the American people.  And like these days, last year he might have gotten a few to believe him - the majority won't.

Why do more and more believe Obama is nothing but a liar? Because the data speaks for itself, and proves he is.

Official government figures show that Obama is issuing far fewer permits on Federal land than George W. Bush did while he was president. At the end of his two terms, George W. Bush issued 6,000 to 7,000 permits a year. Under Barack Hussein Obama the numbers have dropped significantly to a range of 4,000 to almost 4,500 a year.

Since it can take seven to 10 years for a permit to turn into an actual producing oil well, that means less oil will be coming from Federal lands in years to come. That combined with a rise in global demand for oil is a recipe for disaster for the United States. Yes, all thanks to Obama's attitude of "AOTO" and doing nothing to prepare for the future right now.

Advocates of more domestic drilling say we know a crunch is coming, so we should be drilling more right now. Otherwise, the result could be ugly.

"The reality of the situation, with respect to global supply is that Americans can find themselves in gasoline lines, with gas rationing by 2015 or 2016 by us not producing more of our own oil," Hofmeister said.

Obama is either purposing neglecting the facts, or he's just too damn dumb to understand the facts. Either way, he should understand that the facts clearly point out that even with alternatives, the U.S. Energy Department predicts that in 2035 we will still be relying on oil for 83% of our transportation needs alone. And yes, those figures are not taking into consideration all of our other needs for oil.

For some reason, Obama and the Democrats who support him only think oil is for gasoline and transportation. But folks, Obama can't get it in his head that it's not just about gasoline and cars.

Just as important as our fuel needs, are our manufacturing needs - Over 6,000 products we use on a daily basis are manufactured from oil!

Yes, over 50% of a barrel of oil goes to something other than fuels.

One 42-gallon barrel of oil creates 19.4 gallons of gasoline. The rest, over half, is used to make things like: 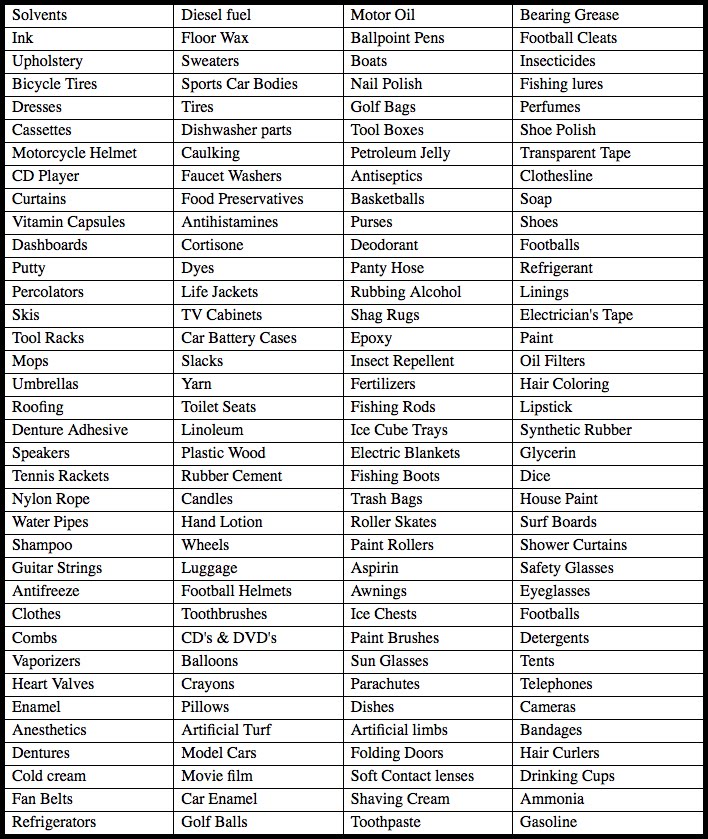 Maybe Obama should look around and maybe take a long look at how many products that we depend on comes from oil?

And ask yourself this, if 50% of all the oil we use is for fuel and the other 50% is for manufacturing products - how much oil would we still need if somehow every Liberal in America could wave their magic wand and eliminate the need for oil for our fuel needs?

Yes, since currently the United States consumes 19.6 million barrels per day, even if every truck, car, big rig, train, jet plane, power plant and home had an alternative fuel source to go to - we would still need at least 50% (or half) the amount of the oil we are using today for our manufacturing needs.

Yes, even if we never needed oil as an energy fuel source again, we would still consume over 10 million barrels a day just for our manufacturing processes.

That means, oil as a base product is almost indispensable for us or others. If we want to continue making the products that we use on a daily basis, than we need to recognize the importance, the absolute need, of oil.

So ask yourself, as I have asked myself lately, when the President of the United States talks about not drilling for more oil because he wants us to find other "energy" sources -- and he completely ignores the manufacturing aspects of oil -- just how many manufacturing jobs is he talking about putting at stake by not drilling right now?

How expensive will these oil based products become if they can't be made easily and here? How many companies are going to have to relocate their manufacturing facilities overseas because they make one or a few of the thousands of oil based products? How many companies will want to take their manufacturing jobs somewhere else because oil is not readily available in the United States and may also be cheaper in other countries than it is here?

Ask yourself, how many Americans are going to suffer because of Obama's arrogance or ignorance?
Fact are facts, there are reasons to drill for oil that have nothing to do with cars and transportation - and everything to do with manufacturing and the industrial might of the American economy.

Yes, the Good News is that Americans are ignoring him and opposing him in many ways. One way is by recognizing that "America Doesn't Need Obama!"

It's true. Americans are recognizing the need for more oil, having a desire to rid ourselves of being slaves to Muslim oil rich nations, and have decided to say "We Don't Need Obama!"

Americans are doing this be striking out and going around the Federal Government -- cutting the Feds completely out of the picture. Americans are exploring and harvesting oil using newer, more modern, and safer technologies to drill and increase America's Oil Supply - more so than ever before.

No, not from oil rich Federal Lands which are supposed to be owned by the American people but have seemed to have now become the sole property of Liberal Environmentalists. No, not that which is controlled by people in favor of our being slaves to Muslims nations, but instead on Private and State lands where Liberals are not in control and America can thrive.

And yes, that is Great News indeed. By saying, "We Don't Need Obama!" By relegating him to being a non-entity, Americans are prospering in some states. While Blue States march down the road to destruction and burden Americans with more debt, Red States are producing low unemployment, higher salaries, and looking after each other without the need to include the Federal Government or Obama. 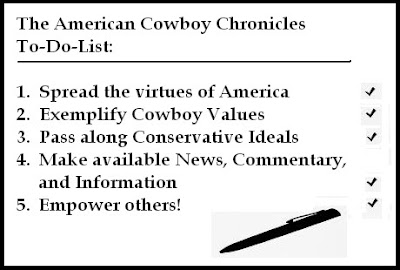