Whom To Thank When There’s No Recipient?

Thankfulness is one of the distinguishing traits of the human spirit. We sense the need to say thanks, and we realize we ought to be more grateful than we are.

We furthermore perceive that we are indebted to (and accountable to) a higher power than ourselves — the God who made us. According to Scripture, everyone has this knowledge, including those who refuse to honor God or thank Him.

Ingratitude is dishonorable by anyone’s reckoning, but to be willfully ungrateful toward the Creator is to deny an essential aspect of our own humanity.

The shame of such ingratitude is inscribed on the human conscience, and even the most dogmatic atheists are not immune from the knowledge that they ought to give thanks to God.

Try as they might to suppress or deny the impulse, “what may be known of God is manifest in them, for God has shown it to them,” according to Romans 1:19.

During a November 2009 debate in England sponsored by a rationalist group known as Intelligence Squared, Richard Dawkins admitted that when he looks at the Milky Way or the Grand Canyon, he is overcome by a profound feeling of thankfulness.

To whom does an atheist like Mr. Dawkins express such gratitude?

I’m by no means the first person to point out this conundrum.

In fact, the Internet is peppered with failed attempts to justify an atheistic celebration of Thanksgiving.

Atheists insist they are not ungrateful. They confess that they feel thankful, and they clearly sense a need to avoid the ignominy of brazen ingratitude on a cosmic scale — especially at Thanksgiving.

One atheist has practically made a hobby of writing articles to explain why atheists feel the need to be thankful and to answer the question of whom they might thank. His best answer?

He says atheists can be grateful to farmers for the food we eat, to doctors for the health we enjoy, to engineers for the advantages of modern technology, to city workers for keeping our environment clean and orderly — and so on.

Here’s the problem with that: Tipping the waitress or tipping one’s hat to sanitation workers doesn’t even come close to resolving the problem of whom Mr. Dawkins should thank when he looks at the stars, stands at the edge of the Grand Canyon, or studies the world of countless wonders his microscope reveals in a single drop of pond water.

Of course, we ought to be thankful on a human level to people who help make our lives better.

But if thanking people exhausts your sense of blessedness and satisfies that “sort of … abstract gratitude” you feel when pondering the vastness of the universe, you have already suppressed your own conscience to a frightening degree.

Your worldview is spiritually bankrupt.

Another atheist writer, acknowledging this problem, says the answer is easy for her: She is grateful to her lucky stars.

“What it comes down to,” she writes, “is that an atheist is generally thankful for good luck, serendipity.”

That’s an odd and ironic answer from a point of view that repudiates theism on the grounds that it is not “rational” to believe in God.

After all, the starting point for atheistic materialism is the equation nobody times nothing equals everything. What could possibly be more irrational?

Furthermore, chance (luck, fortune, happenstance, fate—whatever label you want to put on it) is not a force or intelligence.

“Chance” has to do with mathematical probability. Flip a coin and there’s a 50-50 chance it will come up tails. But “chance” has no power to flip the coin, much less design an ordered universe.

Nevertheless, that’s how atheistic materialists have trained themselves to think.

Chance is the ultimate creator. In the words of one Nobel Prize-winning atheist, “Pure chance, absolutely free but blind, is at the very root of the stupendous edifice of evolution.”

Fortune has thus been personified — imbued with the power to determine, order and cause everything that happens.

At the end of the day, the atheist is no more rational and no less superstitious than the astrologist who thanks impersonal “lucky stars” for good fortune.

On some level, atheists themselves surely realize this.

Proof of their internal angst is seen in the fact that so many of them are not content merely to disbelieve.

They are militant in their opposition to God. They hate the very thought of God and would love to have every mention of Him removed from public discourse — as if that would somehow remove the burden of their own ingratitude and relieve the pangs of a guilty conscience.

But as Scripture says, it is the ultimate folly to try to suppress our own innate sense of obligation to our Maker.

“The fool says in his heart, ‘There is no God’” says Psalm 14:1. In short, to deny God is to debase one’s own mind and dehumanize the whole person.

That’s why we remind ourselves to give thanks to God — specifically, the one true God who has revealed Himself in Scripture as a God of grace and forgiveness, who so loved the world that He gave His Son as an atonement for sin, so “that we might die to sin and live to righteousness,” according to 1 Peter 2:24.

He graciously compels us to thank Him, and He himself should top the list of things we are thankful for.

Reprinted here on American Cowboy Chronicles unedited and with pleasure.

John F. MacArthur is president of The Master’s College and Seminary, host of internationally-syndicated radio show “Grace to You,” and author of nearly 400 books and study guides. 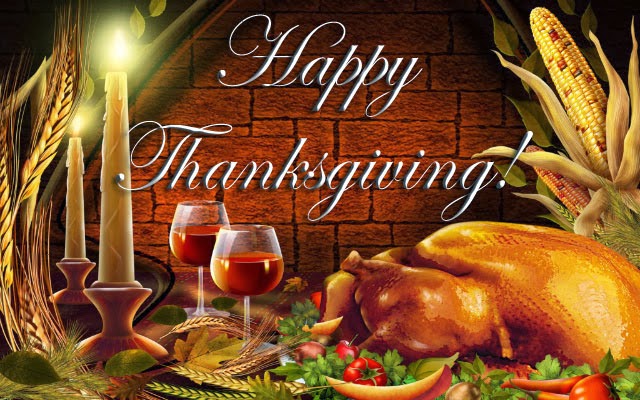 God Bless You and Yours!