Horses Being Abandoned In England

A friend in Great Britain sent me a horrible news story about a pregnant mare that was dumped on a country road there.

When one thinks of horses being dumped along side a road in the U.S. these days, we usually think of horses that are being turned loose to fend for themselves.

Yes, dumping horses along side a road to get rid of them is one way horse owners are cutting their cost. Instead of paying out to house, feed, and care for horses, it is not that uncommon for this to take place as the economy gets worse here in the United States. 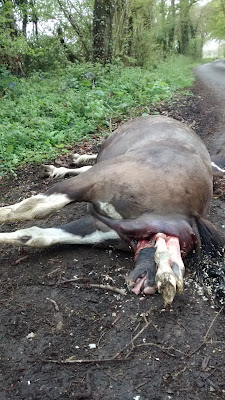 The horse that was dumped along side the road in England was literally dumped after it died while giving birth.

Charlotte Ricca-Smith who writes for Horse & Country reported May 12th, that the mare was dumped on a quiet country lane in Kent.

The pregnant horse with the foal partially out was found by passers-by in Hunger Hatch, near Ashford in Kent on Sunday, May 3rd.

The mare was found with a rope tied around her back legs and the head and feet of the foal could be seen.

"This was one of the most upsetting things I have ever seen," said RSPCA inspector Rosie Russon.

She went on to say, "The horse clearly died in the middle of giving birth, before being dragged by her feet so she could be dumped in the country lane. She needed veterinary attention and help giving birth. She and her foal must have suffered a horrible and painful death. It is so sad." 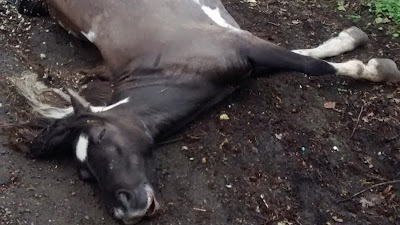 One of the sad parts about this is that the RSPCA receiving in excess of 69,000 calls in the last three years concerning abused horses in England.

The Royal Society for the Prevention of Cruelty to Animals (RSPCA) is a charity operating in England and Wales that promotes animal welfare.

In 2012, the RSPCA investigated 150,833 cruelty complaints. A high proportion of these equines are being abandoned in Kent. The South East county received 1,242 calls in 2014, which is the second highest number in the country, after West Yorkshire.


"We and other welfare charities are struggling to cope with the number of neglected and abused horses and ponies we are seeing, and sadly there are thousands more which are feared to be at risk," said inspector Russon.

One horrific case took place in April when an emaciated yearling found covered in sores.

This horse's name is "Lara," and she was found tethered by her neck and chained to a patch of scrubland.

When she was found, the yearling was covered in sores and with "every bone of her body visible," the report said.

The RSPCA was alerted to the dying foal by a member of the public, who found her tethered by a chain around her neck in Essex. 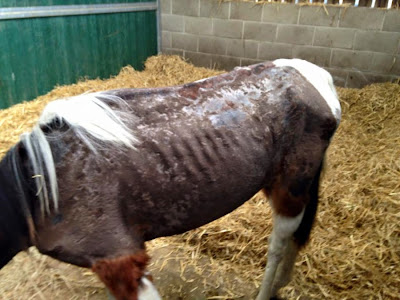 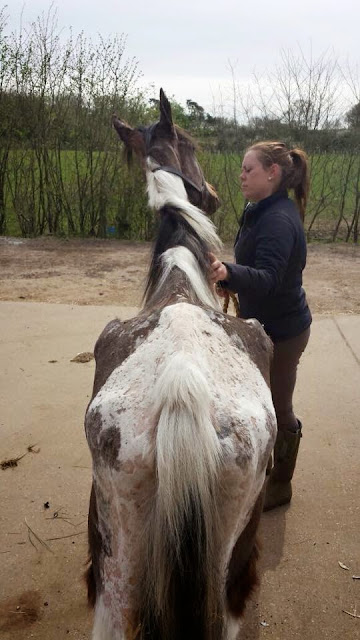 Catley Cross Veterinary Clinic was called in to help, who reported on their Facebook page they had witnessed the "most awful of situations".

The Facebook post read, "A terrified little yearling, as pretty as a picture, tethered by her neck and chained to a patch of scrubland,. No water. No food. A trembling horse, kneeling to eat as she is so weak."

The filly had rubbed off nearly all her hair and was covered in sores and leeches. Her feet are also so long and deformed, which of course meant she has trouble walking.

The foal has been named Lara as the vet clinic said the rescue operation was akin to a Lara Croft mission, with a heavily pregnant vet nurse, slippy hills, police and pre-planned escape routes.

Lara weighs a mere 355 pounds. Yes, she weighs less than half of what her body weight should be. But according to the vets, thankfully she is a "most adorable darling" and has a good appetite.

And by the way, in April, a colt was found tied up in a similar way.

The report stated that the good-natured colt had been left tightly tethered on a roadside, with a severe wound on his hind leg.

Keith was found by the RSPCA, tied to a fence on Pershore Road in Worcester on April 8th.

He had no food or water and the rope around his neck was "dangerously tight".

The piebald colt also had a wound on his hind right leg, which vets at Clent Hills Veterinary Group believe had been left untreated for up to two weeks.

"This is a very serious wound, and when it happened he was very lucky not to have damaged any major structures such as the joint, we are hopeful that he will react well to treatment,” said vet Claire Brown.

The RSPCA are trying to track down Keith’s owner, as the charity faces costs of up to $6300.00 for his treatment and boarding.
"We are keen to locate Keith's owner, or the people responsible for his care," said RSPCA chief inspector Lee Hopgood.

"Keith is such a gentle soul and really deserves looking after. We don’t know how he got the wound on his leg, but it is serious and we are now appealing to the equine community to assist us in rallying round to help with his care."

The vets treating Keith are pleased with his progress and hopeful he will make a full recovery.

Not all are lucky enough to make it after being found.

The young filly above was found with an injury to her hind leg so severe that she had to be put to sleep.
The RSPCA was called to the scene near Grantham, Lincolnshire on April 30th, after a passer-by reported seeing a pony struggling to stand.

"The location was extremely remote; there are no homes, farms or equestrian centres nearby, so it is clear this pony was deliberately left with no intention of return," said RSPCA inspector Ian Callingham.

"Her left hind leg was severely swollen to twice the size it should be, and three large deep holes that were bleeding and covered in maggots were clearly visible. It was terrible to see this young pony clearly in a huge amount of pain."

The wound had been attended to by the owner, as purple antiseptic spray had been used, and the mare was in good condition. It is thought the owner abandoned the filly because they could not afford veterinary treatment.

"It seems the poor pony was then dumped in a remote location where she would not be found, and left to die in severe pain," said inspector Ian Callingham.

Despite their best efforts, the young mare was euthanized on advice of the attending vet. And yes, to answer a question you are probably wondering about, because she was not micro-chipped.

Because of no micro-chip, she was found with no identification, and no way of locating her owner.

As for "Harry" above, well the RSPCA says he is "such a lovely old soul and is at a time in his life when he needs his owner the most"

The RSPCA is calling for any information on two ponies found abandoned and underweight in Southampton in early April.

An elderly chestnut gelding and young New Forest pony were found on land off the Ringwood Road, and had clearly been left to fend for themselves.

The only information the RSPCA has on the owner of these ponies – called Harry and Peanuts – is that she is a blonde haired woman called Jane.

The RSPCA charity has paid for them to see a vet, but the person responsible for their care needs to be found.

"We would really like to ask the strong local equine community if they could assist us in whatever way they can," said RSPCA inspector Penny Baker.

"The older horse, Harry is such a lovely old soul and is at a time in his life when he needs his owner the most. Heart-breakingly, it seems he hasn't received the care he needed."

As for new homes? Well, if they are not claimed within 21 days the RSPCA will be able to remove the ponies and find new homes for them.

“We would like to know if anybody recognizes the ponies, knows the owner or would be interested in offering a new loving home,” added inspector Penny Baker.

As cruel as these cases are, one would think things like this are not done very often. The sorry fact these days is that these sorts of crimes are not unusual.

But please, after reading this, don't think it's just taking place in Great Britain.

While just turning horses loose is taking place here in the United States, tying a horse up to a tree or bush and simply diving away is not out of the ordinary these days in Europe.

In fact, according to some of my readers in France, Spain, Portugal, and Italy who write me, they say this thing of tethering a horse and just walking away to let it starve to death is happening more and more there.

Sure, there are those people who get a horse and realize that a horse was something they didn't have the know how to care for. Sure, there are folks who who have they simply do not have funds to feed and care for a horse.

But frankly, that is no excuse for tying them to a tree or a shrub along side a deserted road and simply driving off to let them die.

Most of the problem here is that some people should not be horse owners. Most do not have the experience or economic ability to do what is needed.

And yes, while I can excuse poor feeding and care to uneducated, unknowing, inexperienced owners who are having a tough time support a family never the less a horse -- there is no excuse in the world for tying a horse up and knowingly allow that horse to die without food or water.

While I have little respect for anyone who would drive their horse to a deserted road and set that animal free to forage for itself, I have absolutely no respect -- in fact, I can say I loathe -- anyone who would be so cruel as to starve an animal to death.

While economics is a factor to sell or simply find a horse rescue which will take a horse, abuse to the extent of that which was set upon Lara and Keith and Harry is totally inexcusable.

After being alerted to what is going on in England, I agree that this horse abuse must stop. I want to thank Horse & Country for this information.

And as for that scumbag who dumped a pregnant mare which had died with her foal, I can only hope there is a special place in Hell for a person like that.