The Marine Corps' BLM Horses Are Nothing New

Providing a home for a wild horse through the BLM Adoption Program can be a challenging and yet rewarding experience.

While adopting a wild horse through the BLM

Through the Wild Free-Roaming Horses and Burros Act of 1971, the Department of the Interior’s BLM (Bureau of Land Management) and the Department of Agriculture’s USFS, has the authority to manage, protect, and control wild horses and burros on the nation’s public rangelands.


They are responsible to do so to ensure healthy herds and healthy rangelands.

The BLM monitors rangelands and wild horse and burro herds to determine the number of animals, including livestock and wildlife, that the land can support. 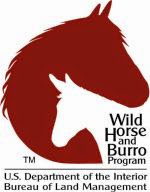 Each year, the BLM gathers what they consider to be "excess" wild horses and burros from areas where vegetation and water could become scarce if too many animals use the area.

These excess animals are offered for adoption to qualified people through the BLM’s Adopt-a-Horse-or-Burro program.

The BLM has subsequently placed more than 207,000 wild horses and burros into private care from 1973 through Fiscal Year 2005.

My alma mater, the United States Marine Corps (USMC) first adopted a Bureau of Land Management (BLM) wild horse for use is a Mounted Color Guard in 1988.

The feral horse was a two-year old which the Marines named “Okinawa.”

His calm performances encouraged the Marines to adopt seven other wild horses.

In 1967, the U.S. Marine Corps Mounted Color Guard was formed at the Marine Corps Logistic Base in Barstow, California.

As word spread about the Color Guard, they were invited to ride in parades all over southern California. As their popularity grew, so did the number of riders; at one time they had 18 riders!

In 2006, the U.S. Department of the Interior, Bureau of Land Management-Nevada, Carson City Field Office announced a special adoption of sorts.

The BLM and the U.S. Marine Corps received as a new generation of four young wild horses from rangelands in northern Nevada.

Of the four for the Corps, three of the wild palomino horses were from the BLM Calico Herd Management Area (HMA) and one palomino was from the Warm Springs Canyon HMA, both located in northern Nevada.

The horses had been in a four-month long training program at the WSCF. They were trained by inmates in the Nevada Department of Corrections program, supervised by Lead Trainer Hank Curry.

At the even in 2006, the BLM made it known that after the transfer of palominos to the Marines there would also be fifteen gelding horses (ten from BLM lands and five astray horses from the State of Nevada) and one jenny burro (BLM) would be offered for adoption to members of the public.

The animals ranged from three years to six years old, were saddle-trained with 120 days of training, and varied in weight and color.

The nine-month old jenny burro was hand-raised by Burt and Dawn Lappin of Wild Horse Organized Assistance (WHOA). Proceeds were donated to WHOA.

The beginning bid on all horses is $150. The saddle-trained animals were prepared at the Warm Springs Correctional Center by inmates in the Nevada Department of Corrections program.

A handout of BLM wild horses and Nevada state “estray” horses offered for the June 3, 2006 adoption was made available at BLM offices in Reno and Carson City as well as online.

I guess the BLM and the must have been concerned about individuals from the Warm Springs Correctional Facility (WSCF) deciding to just drive.

During the the transfer and sale, WSCF rules prohibit the public from wearing any blue clothing, blue jeans, tank tops or shorts. And besides no cell phones, cameras or recording devices being allowed, driver’s licenses and car keys had to be checked in at the gate. I gather unlike some counties, their inmates don't wear stripes.

Ever since the Marine Corps Mounted Color Guard participated in every Tournament of Roses Parade in Pasadena, California, in 1990, it has been all sorts of other events and annual parades and shows.

The Mounted Color Guard members are active duty Marines who volunteer their time evenings, weekends and holidays to perform these duties, in addition to their regular duties. The unit practices twice weekly.

In 1999, the unit participated in 84 parades, ceremonies, horse clinics and rodeos in the western United States.

Today the Mounted Color Guard rides wild palomino mustangs adopted from the BLM’s Adopt a Wild Horse and Burro Program all over the Western United States.

It's true, they have five riders and five palomino BLM mustangs in the Guard.  The USMC Color Guard travels all over the Western United States participating in parades, rodeos, and many numerous events and ceremonies.

They are also extremely active with public school programs.

Now for the rest of the story.

Paige, who calls Texas ‘home’, was born in Panama and raised as a ‘military brat’ whose father was in the Army, said the stableman. Paige first came to America with her family in 1998 where she excelled academically.

Like many people, Paige had another passion, an even greater devotion than the one she had for music: horses.

Paige was first introduced to the Marine Corps’ MCG in July 2011, during the commanding general’s change of command ceremony in Twentynine Palms.

Back on January 1st, 2012, the band stationed aboard Twentynine Palms was disbanded due to budget cuts. With the elimination of the band came the opportunity Paige was looking for.

In April, the musician put down her flute, saddled up and officially checked in to MCLB Barstow, becoming a part of the only remaining Mounted Color Guard unit in the Marine Corps.

After her first enlistment, Paige planned on either re-enlisting and returning to the Marine Corps Band, or becoming a full-time student and getting her bachelor’s degree. Whatever she decided to do, or does as she might still be in, it is very obvious that with her work ethic, she has a bright future ahead of her.

The horse riding Marine musician explained how much she loves what she does for a living.

She loves to travel and she enjoys serving her country, whether it’s playing a musical instrument or riding a mustang — this Marine has a flair for entertaining patriotic crowds across America.

"I love what I do as a United States Marine," she said.

And to her and the Corps, I say, Semper Fi! Good Job!

And yes, this article was compiled using many sources.