Let's Do Onto Others While Keeping Ourselves Armed And Ready 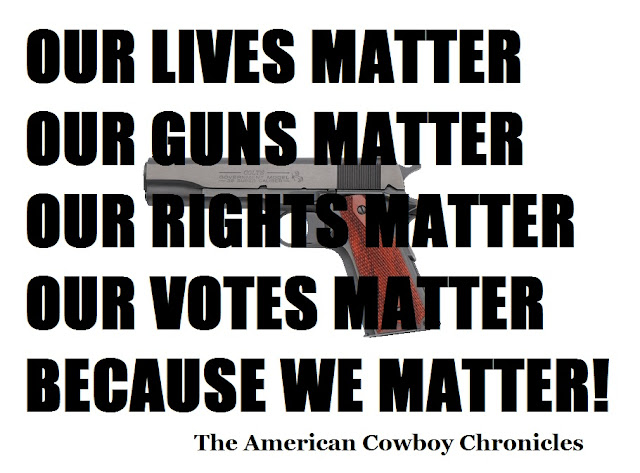 This is my first post of 2016. This post answers a question put to me by quite a few of you, "Should I arm myself to protect my family and myself, even if it means breaking the law?"

Before going to my answer, allow me to pass on some advice from our 26th President of the United States, Theodore Roosevelt, who was a rancher, a cowboy, a statesman, author, explorer, soldier, naturalist, and a true reformer. Yes, one of my heroes.

In a speech in San Francisco, California, on May 13th, 1903, he said: "Let us speak courteously, deal fairly, and keep ourselves armed and ready."

Since I have been a around a while, have done a few things, and have, like most of you, learned a few things over the years, I agree 100% with Theodore Roosevelt. Yes, we should live the Golden Rule while taking responsibility for our own safety is needed.

While Matthew 7:12 tells us "So in everything, do to others what you would have them do to you, for this sums up the Law ...," common sense tells us we need to look after ourselves in all matters including our own security.

Knowing this, to answer your question, let's break it down into two parts. As for the first part of the question, "Should I arm myself to protect my family and myself"? My answer goes along with what Theodore Roosevelt said in that we should treat others with the Golden Rule in mind -- but take ownership of our own security.

Because of this, I believe to protect our families and ourselves, we must: 1) Arm ourselves, 2) Travel with others who are armed, 3) Vote for Gun Friendly representatives, 4) Be ready to use deadly force, and 5) Encourage others to do the same.

In 1982, Kennesaw, Georgia, passed a law requiring heads of households to keep at least one firearm in the house. The residential burglary rate subsequently dropped 89% in Kennesaw, compared to just 10.4% drop in Georgia as a whole. Today, the violent crime rate in Kennesaw is still 85% lower than Georgia's or the national average.
In fact, across the nation, there has been an 89% drop in burglaries in places with mandatory gun laws. So yes, arm yourself and travel with others who are armed, because there is strength in numbers. Get training and be ready to use deadly force if need be. Register to vote and then vote for representatives who support your right to defend yourself and your family. And also, it is very important to spread the word to encourage others to do the same on all 5 points,

Our government will only improve when it enforces present gun laws, improves border security, and restrains criminals, both foreign and domestic, from roaming free. After all, we don't need new gun laws, or other new laws. We need to have the laws that we already have enforced.

200,000 times a year, that is the approximate number of times women use a gun to defend against sexual abuse.

We have to depend on ourselves to provide us security, and our ability to own guns as instruments to defend ourselves is an important right to ensure that. We have to vote in people who understand and respect our ability to fend for ourselves. Only getting off our backsides and buying guns and voting will make things better.

A recent study published in the Harvard Journal of Law & Public Policy concluded that there is a negative correlation between gun ownership and violent crime in countries internationally. Yes, more guns equals less crime.

In fact, the nine European nations with the lowest gun ownership rate have a combined murder rate 3 times higher than that of the nine European nations with the highest gun ownership rate. And yes, for my readers who do not live in the United States, that leads me to answer the same question of "Should I arm myself to protect my family and myself"?

For my readers who don't live in the United States, my advice is this: 1) Arm yourselves, 2) Travel with others who are armed, 3) Replace your Socialist anti-Gun governments with governments who will allow you to protect your family and yourself with arms, 4) Train and be ready to use deadly force, and 5) Encourage others to do the same.

Sound familiar? Yes, it is the same advice I give to all. We have the God given right to defend and protect ourselves, and we need to exercise that right as human beings. Don't depend on others to do for you when you need to do it yourself!

Yes, in other countries it's difficult to own or possess a firearm because governments there have convinced many that "guns are bad" and "people cannot be trusted to provide for their own security." But frankly, that asinine propaganda was designed to keep you under control, as dependent on government protection while being at the mercy of the armed criminal.

Yes, along with that sort of "we'll take care of you" propaganda, politicians all over the world have used criminal and terrorist attacks, all tragedies in themselves, to get anti-gun bans instituted. All that this has accomplish is to strip away your ability to protect yourselves while outlaws remained armed.

This is a situation that many governments have created. It is one where government officials live with armed security details, police are armed, criminals are armed, all while citizens remain unarmed and easy prey.

In the decade following the Great Britain's Labor party's election and the banning of handguns in 1997, the number of recorded violent attacks soared by 77% to 1.2 million in 2007. That means that they recorded more than 2 attacks every minute.
And yes, that was after they banned their people from having the ability to defend themselves with firearms. And sadly, here in the United States, we have politicians who want to create the same here. Politicians want to keep their armed security details, allow the police to be armed, but not attend to the real problem of armed criminals -- all while trying to disarm American citizens.

If I were living in the United Kingdom, Germany, France, Australia, or the Netherlands, I would find a way to arm myself to protect my family and myself -- even if that meant obtaining guns and ammunition illegally.

I'd do that just the same as I would if I were living in anti-gun cities like Chicago, San Francisco, and New York where criminals and illegals aliens have guns but citizens have a hard time obtaining such protection legally.

Now, as for the second part of the question, "even if it means breaking the law?"

Do I advise breaking the law? No of course not. I've always believed in working within the law. But on the other hand, would I risk going to jail to protect my family? Yes, absolutely, because I love my family and would do whatever I need to do to keep them safe.

Would I rather be tried by a jury of my peers rather than place my family's security in the hands of the police or some other government agency who may be too overworked to attend to my family's moment of need? Yes, because I couldn't live with myself knowing that I didn't do something when the police were not available at the moment.

Do I want those who would attack my family or me to know that I have the ability to use deadly force, and that I'm willing to use deadly force? Absolutely yes. I firmly believe that bad guys respect force and avoid contact with armed resistance.

Fact is, of the felons in prison who were polled, 3 out of 4 say they won't mess with armed citizens. They knew their victims were unarmed.


Like it or not, human nature like water flows with the path of least resistance. Criminals do not look at someone armed as a target of opportunity because they themselves may get killed. Criminals see un-armed citizens as targets of opportunity. People attack those who cannot fight back.

We need to acknowledge that states with Right-to-Carry laws have lower violent crime rates, on average, compared to the rest of the country: total violent crime by 31 percent, murder, 39 percent; robbery, 55 percent; and aggravated assault, 19 percent.

We need to understand that more than 80,000 Americans a year used guns in an effort to protect themselves or their property against crime, and that more than 2 million crimes are prevented each year by the presence of privately-owned firearms.

Ownership of our security needs means taking responsibility for our own safety is a big deal. It starts with our having the belief that there are good and bad folks out there, and living in the reality of today, and that we should be prepared to deal with both.

Yes, let's live the Golden Rule as stated in Matthew 7:12 and do to others what you would have them do to you. Or as Theodore Roosevelt put it, "Let us speak courteously, deal fairly, and keep ourselves armed and ready."

We should welcome the good, and deter the bad. And frankly, if the bad are not deterred? Than make them wish they were!

Friends, that is the Cowboy way. That is the American way, It is a fact of life because we all matter.

Tom Correa
Posted by Tom Correa at 1:14 AM