The Titanic sank because the sea conditions were too good. 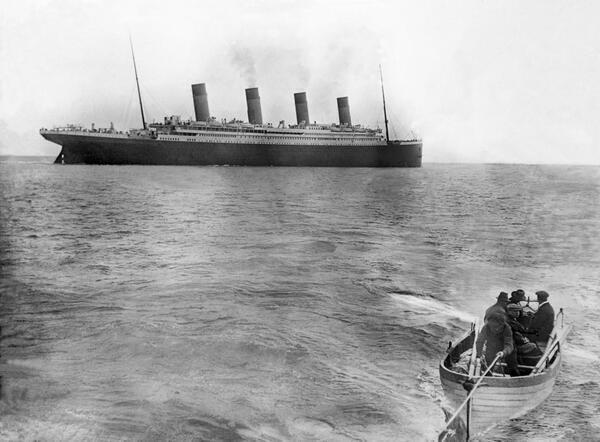 The picture above is the last photo ever taken of the Titanic before it sank 1912.

Most ships lost at sea were the victims of huge waves caused by hurricanes or large storms. But it said that it was a lack of waves that contributed to the Titanic hitting the iceberg at 11:40 pm on April 14, 1912, and sinking on the 15th.

On that night over a hundred years ago, the weather and the sea conditions was said to be perfect -- but for the Titanic, they were too perfect. There was no wind, and thus there were no waves. It was a flat calm night. It was also a dark moonless night, which made it difficult to see an iceberg in the distance.

These tiny plankton glow brightly even with the slightest disturbance. Sailors had seen this phosphorescence many times as they rowed through such waters, every stroke causing a glow that clearly outlined each oar.

On the night it is said that there was not even a gentle swell that could have caused a phosphorescent line around the iceberg.

These conditions were extremely rare for the North Atlantic in April. On almost any other night the huge iceberg would probably have been seen by the lookouts in enough time for the Titanic to avoid hitting it. For me, the whole dinoflagellates thing sounds like a tall tale!

Spain has a frankly ludicrous number of separatist movements all going on at the same time. As for the Basque, well the Basque want their own country, and aren’t afraid to be brutal terrorists to get it.

The separatist movements also tend to be on the big side. Not only is there the large and powerful Basque group, but there’s also a remarkably large Catalan independence movement, as well as Galicia, Andalusia, Aragon, Asturias, Cantabria, Castille, and Leon.

The Basque are the big boys of the separatist world. They’ll attack innocent people, and generally make themselves reviled in their quest for an independent nation. Thankfully, this has decreased in recent years, but the Basque still have a very interesting case for their own nation.

Culturally and linguistically, they have a distinct and ancient lineage, and their language is one of the oldest still in use, completely isolated from everyone around them. As far as a separate state goes, I'm convinced we’ll see a Basque nation in the future. Maybe not in my lifetime, but it will happen if for any other reason -- they are relentless at blowing things up and Europeans usually bow to violence.

Do you need eight glasses of water a day?

Is it a myth that the peddlers of bottled water wanted us believe? Some say yes, and some say no. Some say the "fact" is, we don’t need eight glasses of water a day.

Supposedly the eight glasses of water a day rule is a misunderstanding of an old piece of research that said we need eight glasses of fluid a day, and that it can come from water, or any liquid (including juice, coffee and sodas) and from food too.

Our body is incredibly adept at absorbing liquid from everything we consume, not just water, and everything we ingest will help keep us hydrated. For example, even though coffee makes you pee - you still absorb more than you lose. And while that may be true, we all still need our water.

Searing seals in the juices for a better steak?

Searing makes for great steaks. I’m not going to even question that. Short bursts of extreme heat create delicious crunchy outer layer -- but there’s a much repeated belief that it somehow “seals in the juices” creating better, softer, moister meat.

Wait, does someone actually think that searing a steak magically makes it impermeable? If so, the fact is no, what actually happens is that the "Maillard reaction" creates the brown crust. That brown crust is just really delicious and makes it taste better. That’s it.

Science can’t explain how Bumblebees fly is not true.

This myth gets busted out every time someone tries to shill some crappy psuedo-science, quantum entangled, homeopathic remedy for anything.

"But, but! " they say, "science can’t explain how bumblebees fly!" Which is completely wrong, and scientists have been able to accurately and completely describe the methods for decades.

The story originates in the 1930s, when a then current theory was that science couldn’t account for the aerodynamics of some insects as a way to show that more research was needed. Fact is, science has known how they fly for decades, and it’s not even a mystery. Short answer is that they fly like helicopters, they have "reverse-pitch semi-rotary helicopter blades" for wings.

On October 09, 2014, it was reported that a bee attack in Arizona killed a landscaper dead. The massive swarm of bees attacked four people in southern Arizona Wednesday, killing one and hospitalizing the others.

Douglas Fire Capt. Ray Luzania told The Arizona Republic that two landscape workers were found in critical condition outside a residence on East 20th Street at about 10:30 am. One of the workers had collapsed and was having trouble breathing when emergency workers arrived. Both were rushed to a local hospital, where one of the victims was pronounced dead on arrival.

The other victims were believed to have been stung more than 100 times. A bee exterminator later located a large hive in the attic of the house where the men had been working.

The exterminator reported the hive was about 4 feet wide and 6 feet long, was about 10 years old. And yes, the hive housed approximately 800,000 bees inside.

According to the report, the town of Douglas, a border town in Cochise County with roughly 17,000 residents, has year-round bee activity but its most active during springtime.

Daddy Long Legs are the most poisonous spiders?

Here’s how the myth goes, as repeated by schoolkids and lazy radio hosts the world over: daddy longlegs are the most poisonous spiders in the world, but their teeth and jaws are so small that they can’t pierce human skin, so you’re perfectly safe.

There are a bunch of problems with this one. First, there’s no “daddy longlegs” species. Different bugs are called this all over the world. The most common is probably Pholcus phalangioides, which can bite you, and will leave a little burning sensation for just a couple of seconds, as it is venomous.

There are even non-spider insects who share this name and are saddled with the same rumor.

Did the CIA try to turn cats into spies?

According to one trivia story found out there on the world wide web, cats might be good at lots of things like sleeping and independence -- but they are lousy spies. Yes, believe it or not, back in the 1960′s the United States government had the bright idea to use cats as intelligence gatherers.

Operation Acoustic Kitty was designed to turn cats into proto-Carrie Mathesons by “implanting a microphone in her ear canal and a small radio transmitter at the base of her skull, and weaving a thin wire antenna into her long gray-and-white fur,” according to a story in Popular Science.

The first time the CIA tested out its new feline spy, the cyborg cat was taken to a park and sent to pick up a conversation between two men. The cat quickly got bored by this game and decided to chase after a taxicab instead, and subsequently flattened by it. That was the end of the first Acoustic Kitty.

Operation Acoustic Kitty was abandoned after the CIA tried it again at least once more. A memo from the time says, "Our final examination of trained cats convinced us that the program would not lend itself in a practical sense to our highly specialized needs."

Although this plan did not work 50 years ago, the CIA is attempting to create "insect-cyborgs" to gather information in "precarious situations". And while there aren’t fruit flies that can gather Intel on al-Qaeda’s whereabouts just yet, scientists have successfully developed tiny synthetic prototypes -- but it will take a while before there are actually insect cyborg spies.

So yes, while this all sounds pretty insane and a waste of taxpayer dollars, it's only a matter of time until that fly buzzing around some unbathed goat smelling terrorist is one of our cyborg drone flies there to take that Muslim child molester out once and for all.

And yes, this was compiled from multiple sources.
Tom Correa