So Who Is Funding Muslim Terrorism? 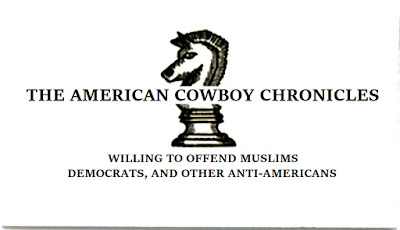 As a young Marine, I learned many axioms of leadership and logistics. Among those was what the famous Napoleon Bonaparte, the first emperor of France, had to say about logistics. Regarded as one of the greatest military leaders in the history of the Western world, he said, "An army marches on its stomach."

Yes, to be effective, an army has to be fed -- and more so, it has to be supplied. Besides, food and water, a fighting force must have supplies and support to keep them fed, clothed, refueled, armed with ammunition, have their medical needs tended to, and much more. This is a fact of life for any fighting force big or small.

Without a supply line, whether it's 4 a man Fireteam or a 400,000 army, an army of any size can only last until they are out of food, water, arms, ammunition, and other equipment that's needed to sustain them. Without supplies, no fighting force can survive.

So knowing this fact of life, back when we all first saw those Muslim terrorists on 9/11, I asked who is funding those animals? Fact is, over the years there has been no satisfactory answer to that question, or to the question: Why can't we shut down their funding and supply lines?

They have to eat, drink water, have gasoline for their vehicles, maintenance of their equipment. Yes, they have a supply line of food, water, fuel, arms, ammo, and other essentials. So why hasn't this been found and cut off? And more importantly, where is that supply line coming from?

Wherever the money is coming from, why haven't we stopped it?

We should be tracing their funding and find out what banks they draw from? Who supplies them? Who finances them? Who are their benefactors? Then we should attack them as we would any military target.

Are their benefactors men such as Billionaires George Soros and Bill Gates and Al Gore? Are their sponsors Barack Obama, Valerie Jarrett, the Clinton Foundation. and Bernie Sanders who gave financial support to anti-American groups Occupy Wall Street and Code Pink?

I've read reports that point to President Barack Obama and his assistant Valerie Jarrett as being responsible for funneling Billions of American Taxpayer Dollars to support ISIS and the Muslim Invasion of Europe and the United States. Obama and Jarrett have made no secret of their allegiances to Islam.

Though they will not acknowledge that Obama's father and step-father were Muslims, his family in Kenya is Muslim, and that Barack Obama Jr was raised in a Muslim school in Jakarta until the 5th grade, Obama supporters rail against the assertion that Obama is Muslim.

Valerie Jarrett has been very open about her desire to transform the United States into an Islamic Nation as far back as the 1970s.

For most Americans, Valerie Jarrett, senior adviser to President Barack Obama, remains largely an unknown. But many in Washington DC see her as the puppet-master working the strings to control Obama. For those who think she has not positioned herself as the true power in the Oval Office, they are being naive at best. 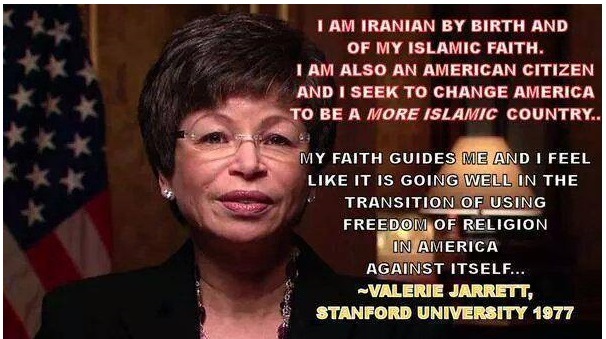 Valerie Jarrett is a woman, who like President Barack Hussein Obama, has direct links to the Muslim world, both past and present. And yes, she has sponsored the appointment of almost all of the Muslim Brotherhood appointments in the White House under Obama.

Besides the White House supplying weapons and other supplies to the Syrian rebels which make its way into the hands of ISIS and other Muslim terrorist groups, I've read where the leader of Germany has sold out her people also -- all in favor of the Muslim Invasion of Europe.

Of course there are reports that Muslim terrorist groups such as ISIS, Al Qaeda, and others being funded by the United Nations in exchange for huge pay-offs? Remember, Saddam Hussein was being funded with the Oil For Food U.N. Scandal for the same reason -- a corrupt United Nations that prostitutes itself for the highest bidder.

The United Nations is known to sell anything from seats on committees to doing special favors, from lying as with the United Nations Climate-gate where it falsified Global Warming data for money to supplying dictators with arms.

I've read reports that the nation of Turkey is supplying ISIS and other Muslim terrorist groups with NATO arms in return for oil. That would account for why they are so angry at Russia for attacking ISIS and the Syrian Rebels that way they have.

And yes, I've even read reports that Saudi Arabia and other OPEC nations are giving Billions of oil dollars to Muslim terrorist groups that accompany the thousands of Mosques that they are being built throughout Europe and the United States.

More and more we are finding out that ISIS and other Muslim terrorist groups are officially being sponsored by Saudi Arabia who is using the thousands of Mosques that it is building throughout Europe and America as weapons depots? The French, the Greeks, Italians, and other Europeans have raided a number of Mosques since the Paris Muslim Terrorist attacks, and have found a huge number of weapons caches at those "religious" sites. Is it happening here, I wouldn't doubt it.

Is it possible that a select few, a Radical Islamic American President and his key adviser who is an Iranian Muslim, crooked politicians like Bill and Hillary Clinton, an anti-American psychopath like George Soros and Muslim sympathizers Billionaires Bill Gates and Al Gore, the leader of Germany, oil rich Arabs, and a corrupt United Nations getting pay-offs from Islamic OPEC nations, could be responsible for most the Muslim troubles that we are experiencing today?

I believe it's certainly possible. Look how Obama has drug his feet in the war against ISIS even going so far as to give them 45 minute warnings that they were about to be bombed. Look at George Soros who recently admitted to financing the riots in Ferguson, Missouri, and Baltimore, Maryland, and the Muslim Invasion of Europe. Look at the leader of Germany Ms Merkel who insists that German must allow Muslim refugees even though she knows that they are rapists, murderers, terrorists, as well as other assorted criminals. Look at the United Nations which is attempting to disarm any sort of resistance to any sort of Muslim Invasion. And yes, look at the United Nations' Syrian Refugee Mandate that it has "ordered" its member states to adhere to. And of course, look at Saudi Arabia's refusal to take in refugees while sending huge amounts of arms to Mosques throughout Europe and the United States.

So yes, as a matter of fact, I do think this handful along with their lap dogs in the Liberal Media are responsible for the troubles that we are in. While these are only a handful of people, most of them hold tremendous power and incredible wealth. So, yes I believe it is possible that these people are at the root of all of our problems. And yes, I really believe that they need to be arrested, stopped, imprisoned, and in the case of the United Nations -- disbanded!

We can stop the United Nation by withdrawing from that corrupt organization. Actually, I believe the United Nations should be disbanded as it has grown into a "World Order" when it was never intended to be such.

As for OPEC and Saudi Arabia, I'd like to see their influence and money dry up -- and the only way to do that is to out produce them. As for Germany's leader Ms Merkel, I'm real surprised that the German people have not thrown her in prison. At the least Germans need to vote her out as soon as possible before she throws all of Germany into Civil War.

The EU, the European Union, needs to rethink its Leftist ideology of mandatory "Open Borders" to stop the Muslim Invasion. Those countries being effected by Muslim terrorists committing domestic crimes such as murder, rape, home invasions, robbery, and assault and battery, should jail and deport their Muslim criminals to some Muslim friendly nation.

I have always believed in boycotting anti-Americans. We can boycott Bill Gates, George Soros, and Al Gore. We can rid ourselves of the Clintons by not putting Hillary Clinton in the presidency. We can get rid of the Obama at the end of this year, then fumigate the White House of any lingering parasites which have stayed around to plague us.

Our nations can relieve itself of a great deal of Muslim problems by forbidding their entrance into the United States using the laws already on the books, US Code 8 Section 1182, to do so. Since Islam forbids Muslims to "assimilate" into non-Muslim cultures, we shouldn't let them into our country since assimilation is the corner stone of our being the melting pot that we are.

Muslims can take their lack of desire to assimilate, and their funding from various sources, and live in the Middle-East. They certainly do not belong anywhere else, especially in multi-cultural societies.