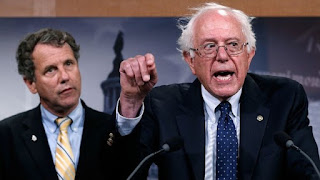 Bernie Sanders has repeated time and again that, "Nobody who works 40 hours a week should live in poverty."

But since Sanders believes this, why doesn't he prove it by submitting a Bill to abolish Income Tax?

Yes, why not prove it and stop taxing working Americans into poverty. Stop taking their money and giving it to people who refuse to work and want everything free!

Friends, that's the other side of his argument that he doesn't want to talk about. If he really feels bad for people who are having a hard time making ends meet, why not do something for them? Why not cut the taxes of those working 40 hours a week so that they won't live in poverty?

How is that you ask? It has to do with their belief that they must take more money from people who are working and give it to others who refuse to work, those who make no effort to work, those who do not want to work and believe that the government owes it to them to take care of them.

Socialist, Communists, tax people into poverty and then tell them that they are there to help them out of poverty by taking even more of their money. Why not allow people to KEEP their money?

Bernie Sanders is berning others, treating them like suckers, lying and cheating them, because he knows that his personal power in government is based on the amount of money he takes from us -- and spends on others to get their votes. That's the bottom line.

Sanders knows that he is not interested in helping others, but only to increase his political power and prestige. Sanders is the same as Barack Obama, Hillary Clinton, Dianne Feinstein, Barbara Boxer, Chuck Schumer, Nancy Pelosi, Harry Reid, John McCain, and others who have made being politicians their careers.

Is Sanders a politician and a scam artist the same as Hillary Clinton or the rest? You bet he is! On a recent interview he was asked what makes having free medical a Right? He answered, because we are humans it is a right which the government should provide. He believes that as humans, as citizens, our government should provided for our safety and security and medical and education so that we may all live without working and making decisions for ourselves.

So where is the scam you ask? First, nowhere do people get free medical. No where in the whole world do citizens get free medical or free education or free housing or free this or that! Nowhere is that a reality!

Friends. believe me when I say that everything the government "gives" you is paid for by us, We The People, Americans citizens. In other countries, as with us here in the United States, their tax payers pay for all of that so-called free stuff.

It might be appear to be free for one, but for others, mostly those 40 hour a week workers who is living in poverty, people are getting ripped off every payday by the government to pay for that so-called "free" stuff.

Yes, that's Socialism. Call it what you will, but that's Socialism and Communism in their perfect world. They see screwing workers as being OK as long as they are giving their followers free stuff bought and paid for by you!

Second, Sanders is a politician who caters to his base which are fellow Socialists all wanting things free. And all say they are entitled to free stuff paid for by others because being humans they see themselves entitled to things.

But wait, are all human beings entitled to free stuff like say free medical? Since Sanders and his base of pro-Abortion followers do not want to extent that same human right to the human that they are willing to kill in a womb. Isn't that child, that human being, entitled to free medical and safety and security awaiting his or her birth? The answer is no, because it is obvious that a Socialist's idea of human rights only extent to Democrats and his followers.

If Sanders is for real, and that he really truly does feel some sort of empathy for workers, why not ease their burden by cutting their taxes or getting rid of payroll taxes all together? Why not lift their burden? Why not show American workers how much he really cares instead being all talk and no action? Why not allow workers to KEEP their earnings?

I know he would not because he like other politicians need all of their money to be a political power in Washington DC.

But really, why not put more money in the pockets of working Americans? Americans hand over more than four trillion dollars a year to federal, state and local governments. Americans will fork over 30 to 40 percent of what they earn to pay their income taxes.

Federal Income Tax was originally introduced a little more than 100 years ago. At that time most Americans were taxed at a rate of only 1 percent of their income. So why not do as President John Kennedy did and cut taxes so that American workers would be able to lift themselves out of poverty and get off of food stamps and off of welfare?

Why not treat American workers as adults? Why should Democrats like Sanders, ardent Socialists, treat Americans like children? Why does Sanders believe Americans need to be cared for like children? And if not like children, why does Sanders see people like pets that can't fend for themselves? Worse of course is the Democrat Party's legacy of racism and paternalism when they were Slave Masters and they treated everyone "beneath them" as if they were owned?

Can Americans get rid of Income Tax and still have enough money coming in?Federal Income Tax makes up 35% of all of the money the government takes in. While we might not be able to completely eliminate Income Tax, it would be great if it were cut. Besides, Income Tax is only one in a long list of taxes. Below is a list of taxes Americans pay in one way or another:

Besides those listed above, there are other revenues that the government collects from businesses such as corporate funds they receive which are not considered taxes, tariffs on trade, and federal permits. And yes, the government has revenue coming in from military hardware sales, lease agreements, and other sources.

The grand theft taking place against an American worker's paycheck is huge. So knowing that, how about we ask Bernie Sanders to let Americans decide if they want to save the fruits of their labor?

And frankly, why is it that Bernie Sanders thinks that raising and not lowering taxes will help working people get out of poverty? What sort of screwed up logic does someone have to have to believe that raising taxes helps people?

People want $15 an hour? They wouldn't need $15 an hour if their taxes were cut! And if they do make $15 an hour, do you think the government won't want more in taxes? You're fooling yourself if you think so.

Bernie Sanders wants to raise Income Tax rates close to 70 percent and take 7 out of every 10 dollars working Americans make. He wants 90 percent of what corporations and small business owners make. Yes, Sanders believes the government should have it all. And really, other than chasing corporations out of the United States to places with cheaper labor and less regulations, closing down small businesses who are barely hanging on right now, and putting millions of people in the poor house when there are no jobs to be found, what do Socialists like Sanders think such a raise in taxes would accomplish?

Sanders wants the Federal government to provide for us as if we were its children. He believes the government, the Federal Government, should take possession, complete ownership, of our land, our homes, all of our businesses, American corporations, and do away with state and local governments.

Bernie Sanders does not have a policy to deal with ISIS or foreign enemies other than we should keep to ourselves. No, his focus is on taking over from Obama and making the United States a completely Socialist/Communist state in every aspect.

Sanders knows that raising the Income Tax levels is the way to reach his goal of a Communist America. He knows that Income Tax is the most totalitarian of all possible taxes. Income Taxes reflect the government's attitude that it owns the lives and labor of the citizens it is supposed to represent.

Maybe Bernie Sanders wants to explain how taking hard earn money from Americans who work 40 hour weeks and yet are living in poverty is OK with him? Maybe Sanders wants to explain how giving their money to people who refuse to work, or the state to use instead of them, is OK to him? Because frankly, it certainly isn't OK to thinking Americans who don't feel the "bern" or like getting "berned" by Bernie!

And yes, that's just the way I see it.
Tom Correa
Posted by Tom Correa at 2:43 PM