First Woman To Run For President 1872 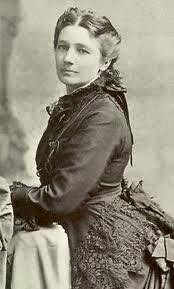 As most of my regular readers know, I've been doing a lot of research on Vigilante Committees in the Old West. My mission is to compare what took place with the lawlessness in America in the 1800's and the rise of Citizens Committees to what is presently taking place in Europe where the governments there cannot or will not protect the people there.

From what I can see, in almost all of the cases of Vigilante Committees being formed, they stepped in to do what the law wouldn't do for one reason or another. In some cases they were formed and became active because of corrupt lawmen who sided with the criminal element. In other cases they were replacing a lackadaisical judiciary -- where the system failed in its duty and allowed criminals to roam free.

Of course, among other reasons, Vigilante groups also formed in areas where there simply was no law enforcement or the law there was outnumbered.

For me, one of the wonderful aspects of researching American history is how one trail will lead to another and another. As with studying any period of American history, I'm always amazed at what I find.

Doing research on Vigilantes in the 1800s, especially those Citizens Committees in the West, has led me to some other unexpected information that my readers my find interesting. For example, I was recently researching Vigilante Committees in the Mid-West when I stumbled on a small unnamed Vigilance group in Ohio. The interesting part of that small group is that they led me to the woman who was in fact the first woman to run for President of the United States.

She was born Victoria California Claflin, and was the seventh of ten children, in the rural Mid-West frontier town of Homer in Licking County, Ohio.

Her mother, Roxanna "Roxy" Hummel Claflin, was illiterate and was said to be illegitimate. Her father was a local "con man" known as Reuben "Old Buck" Buckman Claflin. He was definitely a "con man" and was in fact a snake oil salesman. And no, it is uncertain if that was or wasn't his real surname.

By age 11, Victoria California Claflin only had three years of formal education but was supposedly thought of as being extremely intelligent -- but picked up a lot of tricks of the confidence game from her father. Always on the look out for the law and citizens groups, her mother is said to have tried to maintain some sort of close family while her husband lived the life of trickster on the road -- always looking for their next sucker. But it wasn't long before her father's "trade" forced her family to leave school and Homer, Ohio.

It started as an insurance scheme to collect on a fire. Her father decided to insure their family's gristmill very heavily -- then he burned it to the ground for the insurance money.

So how did my research on Vigilantes land me here you ask? Well, when Reuben Claflin tried to collect on the insurance, get compensated by his insurance company, the fire was investigated and ruled an arson. His claim was denied. With that, he became known in his community as a "con man," as someone who would defraud others including his insurance company. And maybe worse, he became as an "Arsonist".

Soon after that, the local Vigilantes showed up and ran Reuben Claflin out of the county. So yes, besides horse thieves, bad drunks, rowdies, and killers, Vigilantes in the frontier didn't put up with arsonist, con men, and other criminal types.

But believe it or not, even though the Vigilantes ran off Ruben Claflin, probably on a rail, the town of Homer held a "benefit" to raise funds to pay for the rest of the family so that they can depart Ohio as well.

As for Victoria California Claflin, there is speculation that she started working as a prostitute at a young age, and while that was the case -- she had also taken after her father and became a "con woman." Yes, Victoria Claflin was a scam artist, a con "woman", and a prostitute. The swindles, or con games which she was pretty successful at playing on the unsuspected sucker out there -- one was being a "magnetic healer," and two was when she later became a "spiritualist". And yes, it is said that she was such a good swindler -- that even her father would have proud.

When she was 14, Victoria met 28-year-old Canning Woodhull  who was a doctor without a degree from a town outside Rochester, New York.  Woodhull practiced medicine in Ohio at a time when the state did not require formal medical education and licensing.

As for her and Canning Woodhull, they were married on November 20th, 1853 as a marriage certificate was recorded in Cleveland on November 23rd, 1853, when Victoria was two months past her 15th birthday. According to reports, through marriage after marriage, she was supposedly an active "con woman" through most of her life.

Though it is not clear if he was part of her swindles, supposedly she after marrying Woodhull she learned that her new husband was an alcoholic and a womanizer. Since she was already supporting herself, and maybe him as well, as a scam artist and a prostitute, even though they had two children together, Victoria Claflin Woodhull divorced her husband after having the two children. Yes, she kept his surname.

About a year or so later, around 1866, she married Colonel James Harvey Blood.  He had served in the Union Army in Missouri during the American Civil War, and had been elected as city auditor of St. Louis, Missouri.  She did not take his name and kept Woodhull, although she would change her last name later for her third marriage.

During this time, she became close to her sister who was seven years her junior and the last child born to the family. Then, believe it or not, with her husband's money and supposedly money from being a prostitute and swindler, Victoria Woodhull became the first woman to operate a brokerage firm on Wall Street. And yes, they sisters were among the first women to found a newspaper, Woodhull & Claflin's Weekly.

It's true, on May 14th, 1870, the sisters used the money they had made from their brokerage and other sources to create a publication, Woodhull & Claflin's Weekly.

Now, why a publication you ask? Well, its primary purpose was to support Victoria Claflin Woodhull for President of the United States. And yes, the publication would only be published for the next six years.

It is reported that after reading Karl Marx's The Communist Manifesto, she became convinced that economic Socialism was the way to go and being a Socialist and full blown Communist. The Woodhull & Claflin's Weekly gave her a platform to support the legalization of prostitution, abortion, and other issues of women's rights. But frankly, besides giving her a place to run for President and women's rights advocate, it also gave her a platform to further the cause of Socialism/Communism.

Her paper espoused the "virtues" of Socialism so much, that her paper is now known for printing the first English version of Karl Marx's Communist Manifesto in its December 30th, 1871 edition.

It is believed that her estranged husband James Blood and another wrote the majority of the articles. And though it is said that her speeches on Women's Rights were also written by her husband, her marriage to Colonel Blood became estranged. Then in 1872, Victoria Woodhull began a relationship with a Socialist/Communist Anarchist which lasted for three years.

Yes, she was quite the hypocrite on all sorts of levels. For example, that same year in 1872 that she began seeing an Communist Anarchist even though she was still married, she publicly criticized a well-known Clergyman for adultery in print. She even went so far as to send the accounts of the affair through the federal mail system when mailing out her Weekly.

And yes, her mailing out that story in her publication landed her and her husband James Blood in jail when Federal Marshals arrested both on obscenity charges. Did her arrest hurt her? No, it actually made her a suffrage martyr of sorts in the women's rights movement in New York Cit.

Using her new found fame, in 1872 when her political activity came to a peak, she actually ran for President as the nominee from the Equal Rights Party.

Believe it or not, her arrest on obscenity charges a few days before the election for publishing an account of the alleged adulterous affair between a prominent minister and a local socialite is said to have added to the sensational coverage of her candidacy. 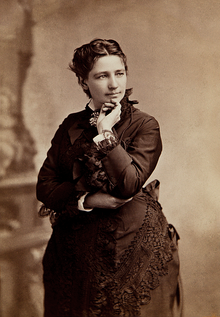 Imagine her platform for a moment, she would make speech after speech on class warfare, women's inequality, being pro-abortion, and the supposed wonders of Socialism -- all while she became wealthy as she railed against the corrupt Capitalist American elite.

Sound familiar? It should because she was Hillary Clinton and Bernie Sanders all rolled into one.

But, as fate would have it, she did not receive a single electoral vote -- or very many popular votes.  For a person with her ego, it must have angered her to no end when she learned that even Karl Marx commented disparagingly on her activities in 1872.

So yes, if Hillary Clinton thinks she is the first woman to run or be nominated as a candidate of a political party to run for president, she is surely mistaken. And yes, if Bernie Sanders thinks he's the first Socialist to run for President -- he too is mistaken.

It is interesting to note how other feminists of her time, including Republican Susan B. Anthony, disagreed with her abrasive tactics and assault on women while pushing for women's equality. Some of her peers at the time characterized her as opportunist and not sincere at all.

Victoria Woodhull ran as a Third Party Candidate, and she obviously lost the election of 1872

But yes, she would try again to gain nominations for the presidency in 1884 and 1892. Newspapers reported that her 1892 attempt culminated in her nomination by the "National Woman Suffragists' Nominating Convention" on September 21st, 1892.

It is said that Victoria Claflin Woodhull was quoted at the time as saying that she was "destined" by "prophecy" to be elected President of the United States. Yes, I think that sounds a lot like Hillary Clinton.

In October of 1876, she divorced her second husband, James Blood. Then within less than a year later, she left for England. She made public appearances as a lecturer. Present at one of her lectures was the very wealthy banker John Biddulph Martin. They married on October 31st, 1883.

From then on, wealthier than she'd ever been, she was known as Victoria Woodhull Martin. Under that name, she published the magazine, The Humanitarian, from 1892 to 1901. After her husband died in 1901, she gave up publishing but kept lecturing.

Then, believe it or not, after lecturing on the need of eugenics of all things, she died on June 10th, 1927, in England.

In a life which included being a "con woman" and prostitute, and living the life of an activist and advocate for free love, for divorce, for abortion, for eugenics, for welfare, for bringing down our Capitalist system, and espousing her support of Socialism/Communism, Victoria Claflin Woodhull would go down in history as the very first female candidate to be nominated by a political party to run for President of the United States.

Factually, Victoria Woodhull was the first woman to run for president -- but she ran as a Third Party candidate.