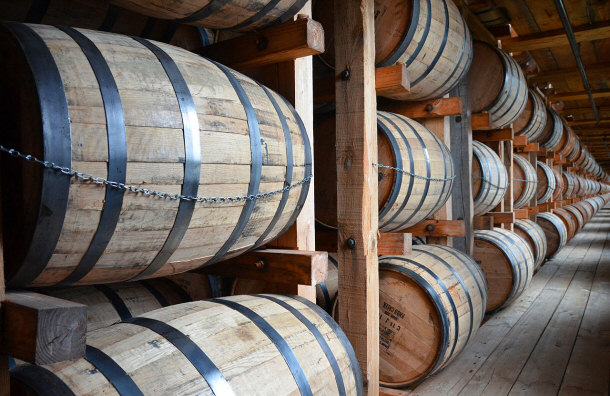 Let's start this off by talking about how Humphrey Bogart, the legendary actor of the silver screen, knew how whiskey saves lives. This is evident while filming the movie "The African Queen" on location in the African Congo.

Story goes that the entire film crew became extremely sick with dysentery from drinking water on location. Unlike the others, Bogart didn’t have a single problem because he didn't drink the water. Instead. Bogart is said to have drank whiskey the entire time he was there.

So who can Bogie and others like me thank for whiskey? While the Scots claim they invented whiskey, the very first whiskey is said to have been created in Ireland by Irish monks.

In fact, the word "whiskey" can be traced to the Irish. How so? Well, in Gaelic, whiskey translates to "uisce beatha" or "water of life." The "e" in whiskey comes from "fuisce", which comes "fromuisce beatha." When the Irish monks spread whiskey around Europe, no one could pronounce "uisce beatha," so they called it "fuisce." And yes, that's how "uisce" became "whiskey." While that's a mouthful, now you know!


Irish whiskey is distilled at a rate of three times, "triple-distilled," using pure-malted barley as the grain. No, don't ever say Irish whiskey tastes smoky. Fact is, malted barely is dried in closed ovens and never exposed to smoke.

Since the Irish believe that whiskey is actually the "water of life," some have theorized that whiskey was apparently invented so that the Irish wouldn't invade other countries. And yes, as we know, it worked. The Irish have never invaded another because of their whiskey!

So now, let's talk about the "Angel’s pinch" of 4% a year. Believe it or not, whiskey stored in barrels gradually evaporates at a rate between 2% and 4% a year. This evaporation is referred to as the "Angel's pinch" or "Angel's share".

The story goes that Angels want to make sure it's OK before we drink it. After all, once you bottle whiskey -- the poor Angel's can't touch it because it doesn't evaporate.

A bottle of whiskey can be kept 100 years, without losing the taste of the drink. After opening the whiskey, it can be kept for 5 years.

Which is proper, Whiskey with an "e" or Whisky without the "e"?

Well. if the whiskey's origins is rooted anywhere other than Scotland, the correct spelling is "whiskey" with the "e". So for the record, when it comes to spelling, the word "whisky" without the "e" only refer to Scottish / Scotch whisky.

And why do the Scots leave out the "e" in whisky? I was told that Scots spell it without the "e" because they believe more vowels waste good drinking time.

And yes, three is considered the magic number when it comes to Scotch whisky. The reason is that true Scotch whisky can only be called Scotch whisky when it has been left for a minimum of three years to age in casks in Scotland.

By the way, on September 9th, 2011, the world’s most expensive whisky was being served at $60,000 per shot at the Montage Beverly Hills, a lavish hotel situated in the Golden Triangle near Rodeo Drive. Yes, the 64 year old single malt cost $60,000 per shot.

So OK, the most important question is: How many cocktails can I make with one bottle of liquor?

The answer to this is going to vary from drink to drink, but the average cocktail uses 1 and a half ounces, which is the average shot.

Filling a highball or tall drink with juice or soda typically requires 4 to 6 ounces.

This chart represents popular bottle sizes in both metric and U.S. measurements and the average number of standard shots each will produce.


This is based on the average 1 1/2 ounce shot.
The most popular bottle sizes are the fifth and liter, and are the sizes you will find most distilled spirits available in.

OK, so the story goes that some people think whiskey tastes like burnt ass. What, you ask?

It has to do with an urban legend: Some whiskeys contain chemicals that only some people are genetically capable of tasting. If you can taste it, they taste like burnt ass. So what's a burnt ass, you ask? Donkey hair on fire! Imagine tasting that!

Here's another Scottish urban legend which my be very true: Lighting whiskey on fire.

It is said that distillers in Scotland used to light some of their Scotch whisky on fire to determine how much alcohol was in it. Supposedly the color of the flame shows whether or not the alcohol content is right. If it burns too hot, there is too much alcohol. Supposedly, they sold the batches with too much alcohol to the distillery workers pretty cheap. Sounds like everyone wins!

Malt Whisky red wine is more useful because it contains more "ellagic" acid -- an antioxidant that can stop the growth of cancer cells and to resist heart disease.

The "Dry Laws" in the United States only allowed whiskey to be consumed for "medical needs".

Did you know that whiskey is beer without the hops that's been distilled two or three times? Yes, it is. Well, sort of.

The American Distilling Institute states: "To distill whiskey you first have to make beer. Beer is a technical term for whiskey wash, regardless of the type of raw ingredients used."

But, here's the twist on that, most of the Bourbon and Tennessee whiskeys are made using hops as an anti-bacterial to propagate their yeast. Some Canadian distilleries use hops. The Irish and Scots don’t. Jack Daniels is said to have recently stopped using hops.

According to Tax World, whiskey is one of the highest taxed items in the world. In some countries, it can be taxed as high as 73% a bottle. It is believed that more than 50 percent of the purchase price of a fifth of whiskey in the United States, half the price the bottle, goes to federal, state and local taxes.

OK, so now, let's talk about how to drink whiskey without mix. There are some who hold the belief that whiskey drinkers should never add ice and certainly not a mix. These purest believe that we should only drink whiskey plain without even a single ice cube!

Supposedly, according to some, ice cubes dulls the flavor of whiskey. Supposedly, it reduces the temperature of the whiskey too much. Thus it inhibits the flavor and freezes its aroma.

While folks in Great Britain tend to drink their whiskey "neat," without ice, Americans tend to prefer their whiskey "over the rock," over ice. I've been told that a little water is best. The water prevents the strong alcohol content from numbing your senses and it lightens it a bit -- besides, sometimes there is no ice.

Supposedly there are between 5 and 7 different main regions where whiskey is distilled. The five regional whiskeys always include Scotch Whisky, Irish Whiskey, Kentucky (Bourbon), Tennessee Whiskey, and Canadian Whiskey. The disputed two regional whiskeys are Japanese and New Zealand.

Bourbon whiskey is distilled at a rate of one time. It is only considered Bourbon if it comes from Bourbon county, Kentucky. That is, 90% of it is. The reason is that it's now not a requirement that Bourbon be distilled in Bourbon county as it was the case for years.

Since Part One ran long, and folks wrote to tell me that it was too long, here is the link to Whiskey Fun Facts and Trivia -- Part Two

I hope you enjoy it!
Tom Correa
Posted by Tom Correa at 3:23 AM