Clay Allison -- "Never Killed A Man That Did Not Need Killing"

Clay Allison was a cattle rancher, cattle broker, and shootist. He fought for the Confederacy in the Civil War, and was known for violence.

On August 6th, 1878, the Ford County Globe noted that "Clay Allison, one of the Allison Bros., from the Cimarron, south of Las Animas, Colorado, stopped off at Dodge last week on his way home from St. Louis. We are glad to say that Clay has about recovered from the effects of the East St. Louis scrimmage."

On September 10th, the Ford County Globe mentioned that Clay Allison was again in Dodge on September 5th.

Then on March 2nd, 1880, the Ford County Globe printed a letter written by Clay Allison in which he defended his reputation by explaining what took place during the "East St. Louis scrimmage."

A CARD FROM CLAY ALLISON

To the Editor of the Globe:

About the 26th of July there appeared in one of the St. Louis papers an account of an altercation between myself and one Tisinger, in East St. Louis, in which account there appeared several gross misrepresentations which I desire to contradict.

1st It was alleged that I was murderer of fifteen men. In answer to this assertion I will say that it is entirely false, and that I stand ready at all times and places for an open inspection, and anyone who wishes to learn of my past record can make inquiries of any of the leading citizens of Wayne county, Tennessee, where I was born and raised, or of officers of the late rebellion, on either side. I served in the 9th Tennessee regiment, Co. F, and the last two years of the service was a scout for Ben McCulloch and Gen. Forrest.

Since the war I have resided in Mexico, Texas, and Kansas, principally on the frontier, and I will refer to any of the tax payers and prominent men in either of the localities where I have resided. I have at all times tried to use my influence toward protecting the property holders and substantial men of the country from thieves, outlaws, and murderers, among whom I do not care to be classed.

2nd, It was also charged that I endeavored to use a gun on the occasion of the St. Louis difficulty, which is untrue, and can be proven by either Col. Hunter, of St. Louis, or the clerk of Irwin, Allen & Co. It was also stated that I got the worst of the fight. In regard to this I also refer to Col. Hunter. I do not claim to be prize fighter, but as an evidence of the correct result of this fight. I will only say that I was somewhat hurt but did not squeal, as did my three opponents.

My present residence is on the Washita in Hemphill county, Texas, where I am open for inspection and can be seen at any time.

The final reference to Clay Allison being in Dodge City was this short item in the Ford County Globe, August 17, 1880: "Clay Allison came up from the Pan Handle Sunday."

In 1881, Clay Allison married and moved his ranch to the Texas Panhandle. His wife eventually bore him two daughters. While it is speculated that family life mellowed him some, but it is also said that he still had his moments of violent rage. For example, there is the story of him visiting a dentist in Cheyenne, Wyoming.

The story goes that the dentist began drilling on the wrong tooth. After having his bad tooth repaired by a different dentist, Clay Allison returned to the offending dentist. It is said he pinned him down, and extracted a few of his teeth, although one report said it was just a single tooth, with a pair of pliers. Imagine that! 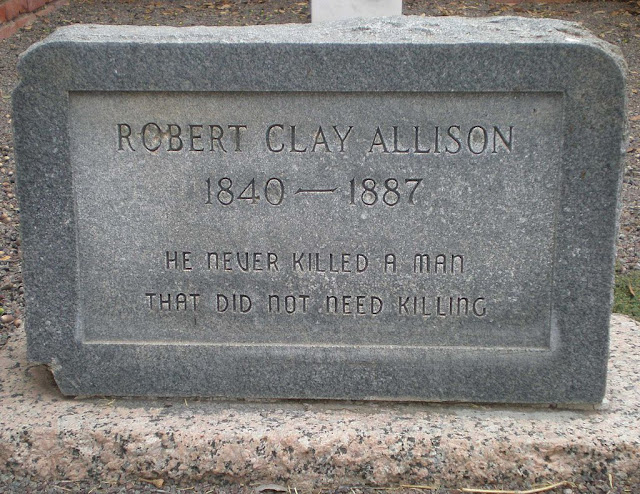 "Never killed a man that did not need killing"

So now, a reader wrote to ask about Clay Allison's famous quote about how he "never killed a man that did not need killing." My reader asked, "how did he know who 'needed' killing?

If in a gunfight, whether it's Clay Allison, or you and I, the first rule is that we need to survive. So yes, an assailant who wants to kill you really does in fact need killing.

This is something that I was taught more than 40 years ago in the Marine Corps and I find that it still holds true today, So yes, to me, it sounds like Clay Allison understand the basic common sense law of survival in that we either kill those who want to kill us -- or get killed.

Yes. it's very understandable how he would see an opponent as someone who "needed killing." And remember, he did not put himself in the same class "thieves, outlaws, and murderers." He believed it was all self-defense.

Of course there is another point to be made. Contrary to the way movies depicted shootouts for many years, no one shoots someone to "wound them" in a gunfight. If you are in a gunfight, your brain better tell you that that person shooting at you needs killing -- and needs killing quickly.

If there was someone out there who had the time and skill to actually place a round in the desired spot on an opponent to inflict what movies called a "flesh-wound," then they never fought in a gunfight in the Old West. Besides, it's relatively impossible to try to do such a thing if you are serious about staying alive.

That's why the ludicrous idea of a police officer shooting someone "just to wound" them is so ludicrous. If an assailant attacks, there are only seconds to respond in a manner that will keep you alive.

The harsh truth is that in those seconds, that assailant needs killing. And frankly, if a police office does not think so -- he will be a victim of a shooting and not a survivor of a shooting.

Most gunfights in the Old West were no different than what takes place today in that an armed confrontation occurs as a close encounter situation between 3 and 10 feet. Of course, there were those shootouts in the Old West were bullets were flying -- all fired with the hope of just hitting who's shooting at you.

The idea that any assailant needs to be stopped, "needs killing" so that you may live, is just common sense survival. And while no one really knows what Clay Allison was thinking when he said that, one can only hope that he meant that he never killed a good man and only killed bad men.

And frankly, I can accept the killing of bad men as a consequence to their bad ways. And as for his train of thought to kill and not be killed in a fight, whether it's a gunfight or knife-fight, I can understand and appreciate his honestly and desire to stay alive. After all, Clay Allison was known to have survived several one-on-one knife-fights and gunfights. So frankly, it just makes sense that he thought the way he did.

That's just the way I see it.
Tom Correa