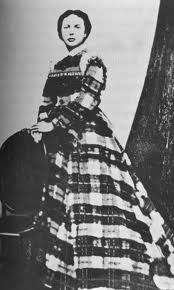 A dance hall singer, a jealous young suitor, a powerful older rival, an ambush in the dark of the night, a wealthy family, and a posse made up of today's legends of the Old West, all are included in this story.

Dora Hand is said to have been born back East somewhere as early as 1840. From what I could find out, some say she was a descendant of a prominent unnamed Boston family and had supposedly studied music in Europe and had once performed opera in New York City. Of course, no one really knows.

The times were different and people were known to create their own history depending on how they wanted to live in the future. Like many coming West, it was not unusual for people to "re-create" themselves and put their past behind them. And like Doc Holliday, she supposedly came West for the fresh dry air to battle tuberculosis.

She arrived in Dodge City in either May of 1877 or in June of 1878. It's believed she was divorced from Theodore "Ted" Hand who was a musician. When she first arrived, it's believed she used he stage name Fannie Keenan.


On October 4th, 1878, Dora Hand was supposedly mistaken for someone else and shot to death by a suitor, Texas cowboy James W. "Spike" Kenedy who was 23-year-old and 11 years younger than Dora. And yes, James Masterson was in on tracking down Kenedy.

Just as it is today, money and power have a way of helping people evade justice when in fact they should hang. So was the case with James Kenedy who was acquitted of criminal charges in the case even though he was "laying in wait" to ambush a rival suitor.

The problems between Kenedy and Kelley started when they became interested in the same woman. It escalated inside the Alhambra Saloon when Kenedy became aggressive toward Dora. Mayor Kelley didn't like it and physically evicted Kenedy from the Alhambra. The two would tangle again later.

As with most actual killings in the Old West, a deadly ambush was what Kenedy had in mind for Mayor Kelley. So after following Kelley's daily routine, he found out that Kelley spent many nights in a crude two-room cabin near the saloon.

After positioning the fastest horse possible to make his escape, on the morning of October 4th, 1878, Kenedy decided to make his cowardly move by firing gunshots into the cabin. But as with all devious plots, something can go dreadfully wrong. In this case, the intended victim was not killed while another was.

Since Kenedy did not know that Mayor Kelley had changed his routine because he needed to get some medical help for a stomach disorder, fact is Kelley was not there and instead was at Fort Dodge which was the Army post about five miles from Dodge City.

Inside Kelley's cabin were Dora and her friend Fannie Garretson who was also a saloon singer. Fannie had encouraged her friend Dora to come to Dodge City in the first place. The two were earning $40 a week, which was a large amount of money at the time, at the Lady Gay Dance Hall and Saloon, which was co-owned by Ben Springer and the Assistant City Marshal James Masterson.

An article in the Boot Hill Museum in Dodge City describes Dora Hand as "of medium height and build, with a face of classic beauty. There was a grace and charm in her walk. She dressed plainly, usually in black, and this color seemed to accentuate the ivory whiteness of her soft skin.".

One of Kenedy's bullets is said to have passed through Fannie Garretson's bedding and then through a wall before it struck and killed Dora Hand instantly.

Kenedy, thinking he just shot his rival, jumped on that fast horse he had waiting and fled south. Kenedy did not hear that he had killed Dora until he was apprehended by a Dodge City posse which included Charlie Bassett, Bat and James Masterson, Wyatt Earp and others.

Kenedy is said to have resembled his Mexican Roman Catholic mother, Petra Vela de Vidal Kenedy, more so than his European father, Mifflin Kenedy, the former captain of a ship and a Quaker from Chester County, Pennsylvania.

For a while Mifflin Kenedy who was the namesake of barely-populated Kenedy County, between Corpus Christi and Brownsville in South Texas, had partnered with Richard King in the King Ranch. Still one of the largest outfits in Texas.

When the partnership with King ended in 1868, Kenedy purchased Laureles Ranch, a 172,000-acre tract near Corpus Christi. Cowboys from the King and Kenedy ranches in 1878 alone drove 15,000 longhorns to Dodge City and were a financial power in the community. So yes, James W. "Spike" Kenedy came from a very wealthy family with a number of political connections.

And no, this wasn't the first time that James W. "Spike" Kenedy was in trouble with the law. After rescuing his son from an earlier scrape with the law in Ellsworth, Kansas, Mifflin Kenedy moved Spike to a new ranch in the Texas Panhandle with a crew and two thousand head of cattle.

He was based at Tascosa in Oldham County, now a ghost town. But in its heyday, Tascosa was the center of business for ten Panhandle counties. It is said that with an athletic physique, dark hair and eyes, that James W. "Spike" Kenedy was considered the handsomest bachelor in the Panhandle.

In Dodge City, young James Kenedy had already twice run afoul of authorities there in 1878 when on July 29th, deputy city marshal Wyatt Earp arrested him for carrying and brandishing a pistol. By 1878, Dodge City has a city ordinance against wearing guns in town at the time.

Of course, on August 17, city marshal Charlie Bassett arrested Kenedy for disorderly conduct -- but a judge gave him a mere warning.

The posse that tracked down Kenedy was made up of some of today's legends of the Old West. Among those in the posse were Charlie Bassett, Bat Masterson, James Masterson, and Wyatt Earp.

There must have been some gun play during the arrest because Bat Masterson is known to have shot Kenedy in the shoulder during the arrest for the killing of Dora Hand. The wound was not fatal but would be a permanent injury.

Kenedy was returned to Dodge City two days after the death of Dora Hand and jailed to protect him from irate citizens who wanted young Kenedy to dance at the end of a rope.

When his father got the word of what his son had done and how he was being held, it is said that Mifflin Kenedy rushed to Dodge City with a large amount of cash in hand. And yes, in my opinion, that cash must have worked like a charm.

On October 29th, 1878, the Ford County Globe reported that Kenedy, "the man who was arrested for the murder of Dora Hand was examined last week before Judge [R. G.] Cook and acquitted. His trial took place in the sheriff's office, which was too small to admit spectators. We do not know what the evidence was or upon what grounds he was acquitted."

I read where On March 20th, 1951, in a letter to historian Stanley Vestal, author of Dodge City: Queen of the Cowtowns, Stuart Lake claimed that Mifflin Kenedy had paid as much as $25,000 to town founder Robert M. "Bob" Wright, a member at the time of the Kansas House of Representatives who made and lost a fortune in the cattle business.

According to Stuart Lake who is not a very good source to go to, he is reported to have said that "other monies were likely paid to Bat Masterson and other Dodge City officials to buy James Kenedy an acquittal due to lack of evidence".

You can take that with more than just a grain of salt, because frankly I wouldn't believe anything Stuart Lake says. Remember, Stuart Lake was the official biographer to the infamous Wyatt Earp. And frankly, in my opinion, what Lake wrote about Earp in that biography is mostly just exaggerated nonsense.

So really, who knows what arrangements were made behind closed doors to get him off. All in all, I believe it is pretty safe bet to think there was big money involved.

As for the rest of the story regarding Dora Hand? Well it was reported that her funeral was well-attended. A cowhand was quoted as having said, "Every store, saloon and gambling house in Dodge closed during the funeral, and four hundred men with their sombreros on their saddle horses rode behind the spring wagon that carried Dora Hand up Boot Hill."

On October 5, 1878, the Dodge City Times reported that Dora Hand was "a prepossessing woman whose artful winning ways brought many admirers within her smiles and blandishments."

Within the decade, Mayor Kelley lost his holdings in a series of financial reversals. He spent his last years at the Kansas Soldiers' Home at Fort Dodge. He died there in September 1912, at age 79 of tuberculosis. Yes he died of TB, the disease that some say plagued Dora Hand during her last days.

Tom Correa
Posted by Tom Correa at 8:47 AM