The fort was primarily garrisoned by the Buffalo Soldiers and established by Captain Valentine Dresher, Company B, 1st California Infantry, to protect travelers passing through Cooke's Canyon by attacks from hostile Apache Indians. Over the years this fort was garrisoned by Company A, of the 38th Infantry, as well as companies D, and I, of the 25th infantry and Company M of the 3rd Cavalry.

Ten-foot high adobe brick walls enclosed the fort with a sally port on the South side, a suttlers store to the west, built just outside of the fort along the west wall, and several one-story buildings. The buildings within the interior of the fort were supply buildings, officers quarters, barracks, armory, and so on, all of these buildings were also made from adobe bricks.
The dump was located a very short distance to the South and many objects are still visible within it. The fort was supplied by water from Cook's spring, which was a never-ending supply of spring water. In fact during my last visit to this site around 1996 the spring still had an ample supply of water.

Fort Cummings is located at the eastern mouth in the upper part of Cook's Canyon which leads to Cook's Pass which is a narrow gap along the route to California through the Cook's range. In 1846, lieutenant Colonel James Cooke led his Mormon Battalion through what became known as Cook's Range, Cook's Canyon, and Cook's spring. 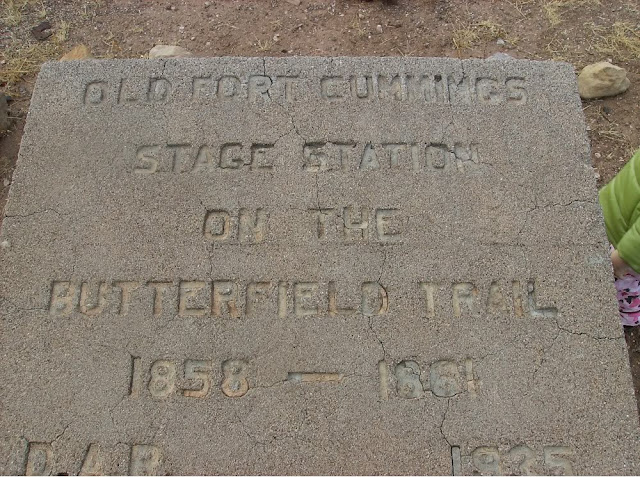 In 1857 James E. Birch established mail and passenger service through Cook's canyon which connected San Antonio, Texas and San Diego, California. The following year in 1858, John Butterfield also began providing stage services through the canyon but he took it to a much larger scale by connecting St. Lewis, Missouri to San Francisco, California. This became the world's longest stagecoach route covering 2,800 miles. Both companies used the spring as a stage stop where the crew would change the teams and feed the drivers and passengers.

From 1848 to 1861 this pass was a very dangerous route to travel. Many travelers, reaching into the hundreds, were ambushed and killed by the Apache Indians for over the period of a decade, giving this pass the terrifying name known to travelers upon this route as Massacre Canyon. During this time period the Apaches were being led by Mangus Coloradas, Chief of the Chiricahua Apaches and father in law to the better known Apache leader, Cochise.

By the year 1861 the two Apache leaders set up headquarters near Cook's Peak in order to kill as many whites as possible. The Apache called the peak "Dziltanatal" which loosely translated means, "Mountain holds its head up proudly."

Shortly after establishing Fort Cummings in 1863, a board of officers commissioned the graveyard. Travelers along Cook's Canyon registered several complaints about the many human skeletons, which could be seen from the trail all too easily. The soldiers were ordered to gather the remains and bury them in a mass grave within the newly built rock wall cemetery.

Closed down in 1873 because they believed the Apache threat to be over, Fort Cummings was once again garrisoned in 1880, due to the result of the Apache leader Victorio leaving the Apache Tularosa Agency.

Despite the forts presence, Victorio and other Mimbreno Apaches killed a man by the name of Samuel Lyons along with three others in Cook's Canyon on June 5th 1880.

Several skirmishes took place in Cook's pass while the army was escorting travelers resulting in the deaths of both soldiers and Apaches. Cook's Canyon was likely more dangerous than Doubtful Canyon on the Arizona New Mexico border, or even Apache Pass in Southeastern Arizona, and it is claimed that the death toll of Cook's canyon is larger than the other two combined.

For some reason this canyon is not nearly as well known as Apache Pass, which reason I attribute to Hollywood. Apache Pass makes for better title then Cook's Canyon.

While on a woodcutting detail in an area called Oak Grove about five miles from the fort, a six-man detail was attacked by Apaches at breakfast time. Corporal Webber was in charge of the detail and on the 16th of January 1866 he went back to the fort for more provisions.

When he returned the following morning he found privates Matthews and Goldsberry stumbling along the road with private Goldsberry having an arrow in his hip. The men told him they had spotted forty or fifty Indians creeping up on their camp so the detail took up their arms and began firing at the Apaches. Privates L.S. Hunter and Charles Devlin fell wounded, then Matthews and Goldsberry ran to a clump of trees nearby while being pursued by the Indians.

At this point they were able to reload, then made it to a small hill where they made a desperate stand.

Webber then took one of the mules from the wagon team and sent a messenger to the fort. Lieutenant John D. Slocum was the only available officer at the time because Captain Burkett and Lieutenant Edgar were on patrol with a sizable force. Slocum, taking every available man except the guards, rushed to the wood cutting camp finding the troopers bodies horribly slashed.

In the graveyard near the old Butterfield stage stop they buried the troopers and carved a headstone reading:

Fort Cummings had been closed once again in 1884 but reopened for a short period of time in 1886. Geronimo had surrendered at Skeleton Canyon in Southwest New Mexico in that same year which brought an end to the Apache wars so Fort Cummings was no longer needed as a strategic site.

I have been to this site a few times and there aren't much of the walls left anymore. There are two graves under the trees near the spring and if you decide to travel the old canyon trail you will see a few more depressions of graves and a few rock covered graves.

Also, if you do decide to take the drive you can expect some desert pin striping along the side of your truck from the brush. I would recommend a four-wheel drive vehicle for the ground clearance also. By following this trail you will come out on highway 180 which runs between Deming and Silver City.

The best way to reach this site is to take Highway 26 between Deming and Hatch New Mexico. About fourteen miles after entering highway 26 watch for an old wooden windmill on your right.

Go left on the dirt road just passed it and drive along the fence line on the West Side of the road. At the end of the fence line turn onto the dirt road to the west and follow your nose. It will wind around through the hills, past the fort old graveyard, then down the hill to the fort location. Again, take a vehicle with decent ground clearance.