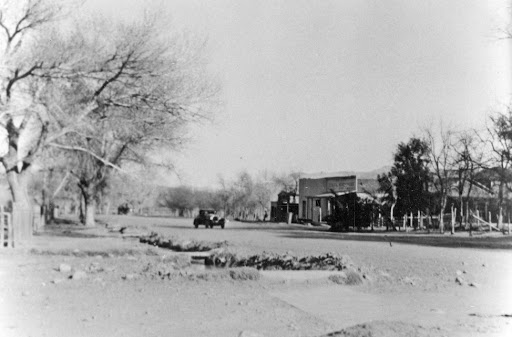 Lake Mead has become a popular public attraction. Visitors are drawn by the sight of its shimmering body of water. It appears as a mirage atop an unforgiving desert.

The effects of extreme drought on Lake Mead, actually the largest reservoir in the United States, is incredible as the water level to fall to record low levels. Lake Mead was created during the Great Depression with the construction of Hoover Dam in the 1930s.

The water there is meant for the surrounding area including the city of Las Vegas which has seen a population growth from 160,000 to 670,000 in just the past thirty years.

Some who understand the seriousness of the problem complain about the water used in gigantic hotel pools and water parks, or in all of the many pools owned by private residents. Lake Mead supplies water to all of Las Vegas, other cities and towns in Nevada, and to cities in Arizona, California, and even northern Mexico.

Yes indeed, the town of St. Thomas, Nevada, which has been submerged under water is now exposed. And yes, there is a lot to see.

Founded in 1865, St. Thomas was initially settled by Mormons who settled there next to Muddy Creek which is a tributary that flows into the Colorado River located 22 miles away. When the Mormons abandoned the town in 1871 for a safer place, the outlaws who plagued the area moved in and took over.

Later, the town quieted down and was eventually settled by people attracted by the region’s prime farming land. And yes, for a time the small town of St. Thomas became a key stopping point between Salt Lake City, Utah and Los Angeles, California.

That was fine until the late 1890s and early 1900s when people recognized that there was a need for water storage, and with that the federal government decided to build a dam to harness the power of the Colorado River in an effort to develop the area and create large-scale irrigation. Soon, the small pioneer town would find itself under tons of water.

Yes, the Old West town of St. Thomas has been submerged when the Colorado River began to fill the surrounding canyons and valleys.

In 1928, President Calvin Coolidge signed the bill authorizing the building of what would become the Hoover Dam. St. Thomas residents were ordered to relocate and the U.S. government reimbursed them for their property. Residents abandoned the town as Lake Mead began to fill in 1935. The last resident to leave St. Thomas rowed away from his house in June of 1938.

When it is at capacity, Lake Mead is the largest man-made reservoir in the United States. At the lake’s highest point, St. Thomas was 60 feet below the water’s surface. But then came the fluctuation in water levels. Over the decades, drought conditions have given visitors repeated glimpses of the once-thriving wild west town and, since 2002, St. Thomas has remained exposed.

So what was the town like? Well at its peak, the town’s population reached about 500. There was a school, a church, a post office, grocery stores, and even an ice cream parlor. 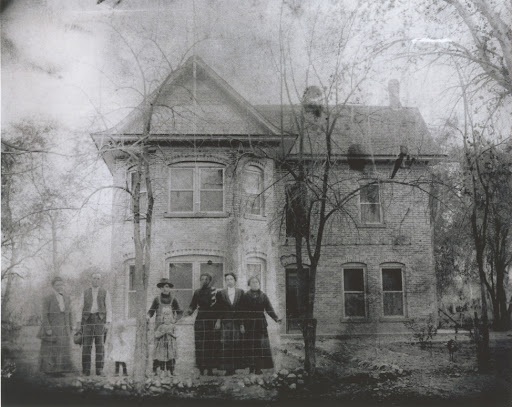 Group of people in front of Gentry Hotel in St. Thomas, Nevada.

A salvage crew rafts through the town of St. Thomas near the ruins of a building as Lake Mead begins to submerge it in June 1938. 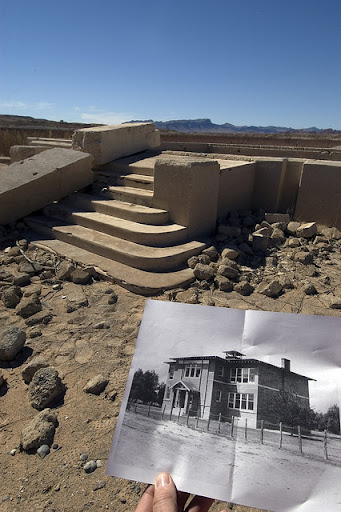 The foundation of the St. Thomas Schoolhouse, which once looked like the black and white photo, sat underwater for many years after Lake Mead filled. Due to declining water levels, the town resurfaced in 2002. 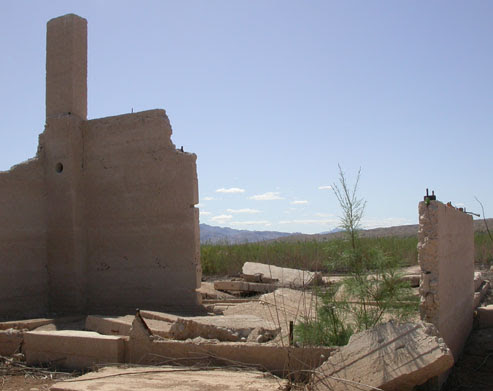 Today, you can still see the steps of the local schoolhouse and the wall of the St. Thomas ice cream parlor, as well as other foundations of the buildings.

Christie Vanover, public affairs officer for the Lake Mead National Recreation area. said, "It's kind of ironic that this town was initially settled because of water. Water was the source that started this town and then it was water that defeated the town when the lake filled up, And now it's water that is helped us to rediscover the town because of the drought and the lack of water. There are still artifacts on the ground in addition to the foundations. There’s also wheels, engines or other car parts that are still present from people who just abandoned their cars when they left the town."

Visitors are free to wander around the area but are prohibited from touching or moving any objects long-ago residents left behind; those pieces are considered protected cultural artifacts. And yes, federal officials expect St. Thomas to remain exposed for at least the next two years or more because of the ongoing drought.

But since Lake Mead gets its water supply from snow melt-off in the Colorado Rocky Mountains, it could eventually refill itself -- again sending St. Thomas back to its underwater tomb. Until then, from time to time, former residents and family members continue to hold reunions at St. Thomas. Believe it or not, the last one being in 2012. While they remember old times, the rest of us who come to St. Thomas enjoy a unique chance to revisit history.

I posted this article for a few reasons. I love ghost towns as well as historic small towns being preserved today. And yes, I even love the buildings that we see that are in decay -- their stories lost to time.

But whether it's one of those old building leaning toward falling but refuses to, or the preserved downtown of Jackson California, or an infrequently seen St. Thomas, Nevada, they allow us a glimpse into the past. They give us a physical reminder of things back when. They provide us a connection to our past as Americans. They provide a first hand indisputable evidence of how things were once upon a time.