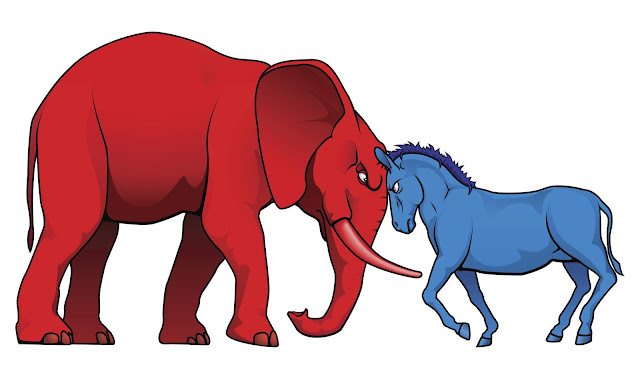 BEAVER, Pa. — A retired middle school principal was so moved by Donald Trump that he switched his Democratic Party registration so he can vote for him in Tuesday’s Republican presidential primary.

So did the daughter of a steelworker, who twice voted for President Barack Obama but says she is “over” the Democrats’ political correctness.

And a husband-wife team of Trump volunteers — she’s a laid-off airport worker, he’s a laid-off truck driver — were Democrats for 30 years, until recently.

“We always voted Democrat,” said Laurie McGinnis, as her husband Ricky hung a Trump banner outside their South Greensburg home. “But not any more.”

Some of these newly minted Pennsylvania Republicans are formalizing a process that began with Ronald Reagan’s election in 1980, when conservative-leaning Democrats began shifting away from the party in the faded industrial state.

Others moved abruptly, inspired by Trump and fed up with a party they say no longer speaks their language.

Together the result is one of the most sizable shifts of partisan allegiance ever in Pennsylvania: 61,500 Democrats have become Republicans so far this year, part of a 145,000 jump in Republican registrations since the fall 2015 election, according to state figures analyzed by both parties. It’s more new Republicans than in the previous four years combined.

The onslaught has helped make Trump the favorite heading into Tuesday’s primary, helping put Pennsylvania, which voted for Obama twice, in play in the November presidential election.

“The party-switching has been going on in an evolutionary way for two decades. This just propelled it faster,” said G. Terry Madonna, a professor at Franklin and Marshall University in Lancaster, Pa. “Many of them are Reagan Democrats – white, working-class, blue-collar, incomes of $35,000 to $40,000 or less, high school educations or less.”

“They feel frustrated, they feel left behind,” Madonna said. “They feel Trump is sticking it to the man.”

East of urban Pittsburgh, at Trump headquarters in Monroeville, volunteer Tricia Cunningham said that half the people who walk through the door are party switchers. So many supporters have come in to pick up lawn signs or volunteer that the office has had to open a second floor, and signs are limited to just one per person, Cunningham said.

Even her mother, a lifelong Democrat now living in a nearby nursing home, made the change, she said.

“I look in the mirror and I say, ‘What the hell are you doing?’” Rox Sarrao, the former principal, said with a laugh. He voted for Obama in 2008 and had kept his party affiliation so he could back Democrats in local elections even though he was once a Republican. He went to the county courthouse last month to switch to the GOP. He now drives 40 miles daily to volunteer at the Trump office.

In some ways, it’s no great political mystery what has happened in Pennsylvania, where the remains of the long-gone steel industry rust the landscape and coal country fights for its life.

The mostly white electorate here comes from an earlier iteration of the American melting pot –– Eastern Europeans, Italians, Irish –– who have little resemblance to the newer Democratic coalition of young people, minorities and urban white-collar professionals. Many families have stayed here for generations, as the nation’s economy and demographic trends have moved on.

“We voted Democrat for 59 years,” said Eleanor Kanick, a retired postmaster, with her husband Stanley, a welder, in Avonmore. “Our parents were Democrats, too. I said they’re going to turn over in their graves.”

Tom Balya, a former Democratic County Commissioner in Westmoreland who hosts a local radio show, said callers often voice fears about shifting socioeconomic conditions that have left them struggling to keep up. It’s going take a generation for Democrats to recoup their losses, he said.

“They see this world changing around them,” he said. “It’s a generational thing. You’re not going to get people over 50 to change their beliefs. It’s not going to change quickly.”

But others see a deeper disconnect in a Democratic Party that has put its emphasis on attracting moneyed metropolitan voters and fast-growing minority groups while taking its core blue-collar electorate for granted, a theory spelled out by author Thomas Frank in his new book, “Listen, Liberal.”

Dorothy “Sissy” Aukscunas grew up not far from where she lives now in Beaver. Her father, a Serbian immigrant, was a foreman at a steel mill, the kind of job that enabled his wife to stay home and raise four children.

During the 2008 Democratic primary, she gathered her own young granddaughter to watch history unfold on TV, and cried when Hillary Clinton lost to Obama.

At a coffee shop downtown with her 33-year-old son Micah –– who also switched from Democrat to Republican— she said she’s tired of the Democraatic Party championing “politically correct” issues, like who should bake a cake for a gay wedding or whether to say “Happy Holidays” instead of “Merry Christmas,” at a time when terrorism is intensifying and families are struggling to live on wages that haven’t budged from what her husband earned 30 years ago.

“I would say the Democratic Party moved away from me,” she said. “I didn’t move away from it.”

The more she watched Clinton this time, the less she liked, sensing an opportunist politician moving too far to the left to keep pace with the popularity of rival Bernie Sanders.

“One of the main things I noticed was how intolerant tolerant people had become,” she said. “I noticed it in me as well.”

It was a difficult decision to switch, she said, but when her driver’s license came due last fall, she was at the motor vehicle office when she checked the box.

Her grandchildren, who align more with Sanders, have not been pleased.

Democrats downplay the shift as notable but insignificant. When matched with 89,000 new Democrats registered since fall, the overall boost was 56,000 new Republicans in a state with more than 8 million voters. Democrats still hold a more than 900,000-voter advantage over the Republicans in Pennsylvania.

“It fits nicely with the narrative that Trump’s going to bring out this whole cadre of voters … and bring in states like Pennsylvania and the Rust Belt that haven’t been in play for a while,” said Democratic Party spokesman Preston Maddock. “I’ll believe it when I see it.”

At the same time, Republican officials are not necessarily doing backflips over the registration surge. They are very much aware that enthusiasm is more a vote for Trump than an affirmation of the their party. The state’s closed primary system forces voters to choose parties or sit out Tuesday’s contests.

The Republicans know knows its hold on these voters is tenuous.

“Both parties have lost track of how to reach out to middle-class voters,” said Michael T. Korns, Republican Party chairman in Westmoreland County, the next county over from Trump’s headquarters. “I don’t think anyone has been talking directly to voters in Westmoreland County. What we’ve been getting for a long time is basically ignored.”

Laurie McGinnis, 49, and her husband, Ricky, 57, who grew up in the area and met as school bus drivers, were watching the first Republican debate last summer when they began thinking about switching.

“We were just sitting there with our mouths open, in awe,” said McGinnis, who, like her husband, now collects disability benefits after both were laid off.

They were impressed by Trump’s willingness to talk critically about immigrants and others in a way that other politicians wouldn’t dare. “The silent majority’s been kept quiet by all the political correctness in the world,” she said, reading from some notes she had jotted in a notebook to organize her thoughts.

Even though thieves stole their Trump yard sign, she was stapling a new one to a flagpole Friday evening. Ricky hung it outside their tidy home, as the 4-year-old granddaughter they are raising looked on.

“I don’t care how many signs they steal,” she said. “It’s not going to change the voters."

So now, what are my thoughts on this?

Friends, Democrat dissatisfaction is creating a migration to Trump that America has not seen since the Democrats were fed up with Jimmy Carter and flocked to Ronald Reagan back in 1980.

The migration was so intense in 1980, that it carried on in 1984, when even the "Bluest" of Liberal states California turned "Red"! Can that happen again? I believe it can.

The above Duluth News Tribune report was one of many over the last six or eight months. And sure there are Liberal websites that are saying nothing of the such is taking place, but that is just the Democrat Party trying put a good face on a bad situation. Yes, there are people in the Democrat Party who are trying to get us to believe that the Titanic really isn't sinking when in fact it is.

Like it or not, even Democrats can't hide the fact that Hillary Clinton is a liar and criminal who allowed people to die in Benghazi and committed a breach of National Security which the FBI said she did. And yes, even Democrats are sick and tired of Obama's policies of hate and division which Hillary Clinton said she wants to keep in place! Imagine that!

That is the reason for the migration of dissatisfied Democrats. That's why they are coming over to vote for Trump. And yes, by some reports, the number of Democrats jumping ship is in the millions.

Yes, according to what I've researched, annalists believe that anywhere between 10 to 12 million Democrats and Independents voted for Trump in the primaries and plan to do it again come November.

Friends, president Obama is always touting how Black Live Matter is a "movement," which is defined as a group of people working together to advance their shared political, social, or artistic ideas. In the case of Black Live Matter it is to push Black Supremacy.

Well, voting for Donald Trump has truly become a "movement." We are Americans determined to retake America and undo all of the crap that's been going on for far too many years now. And yes, with us are dissatisfied Democrats who are migrating to Trump for the same reasons.

That's just the way I see it.
Tom Correa