About the "Tale of the Drunk Monkey"

I'm a little amazed that people have actually taken the time to write me to ask about my "Tale of a Drunk Monkey" story. Imagine that.

A few people have asked if I did think about trying to get him citizenship papers and running him for Congress and so on?

Yes and a lot more! For example I actually thought that the little stinker had a better personality than my Sergeant at that time, and that he could have started his career by replacing him first. I did wonder how long it would take before anyone realized that the Sergeant was replaced by someone with a higher IQ, but then again who knows he may have gotten a promotion out of having the monkey do his job for a while!

In fact, besides thinking about replacing my Sergeant, there were other things that I left out of the story about that night. Things including how there were a couple Sailor friends who wanted to sneak Henry aboard and keep him in the Boiler Repair shop to hide him until we got back to the States. If we got caught doing that, all I can say is that it would have been serious trouble for us. And yes, we chickened out fortunately.

Now as for the couple of people who are angry with me because they assume I'm calling President Obama a monkey, and how that my whole birth certificate thought was written as a metaphor about Obama. Actually there were a couple of people who wrote me asking if the whole Foreign Exchange Student, Congress, and birth certificate thoughts were all about Obama. Sorry, but it has nothing to do with President Obama at all.

Sorry to say that I'm not that imaginative. I've been telling this story since it happened way back when and long before anyone ever heard of Barack Hussein Obama. Sorry folks but it's not about the President.

For those whose political leanings are to the left and who believe that I'm "just taking an unwarranted swipe at the President," please be advised that that is in your own mind and not mine.

Though I don't agree with the President's policies, "Tale of a Drunk Monkey" is just a story about me when I was a young Marine and I found a drinking partner in a monkey that I bought for a few pesos. Bottom line is that not everything in this world is about Obama.

One person wrote to ask about writing the story and how long did it take me to write it? She also wanted to know about "the mechanics" of writing?

I find that an interesting question because I'm not a "Writer." I'm a guy who likes to write in the sense that I know what I want to say and where I'm going without a layout or plan and all of that sort of thing. When I was in college I took writing classes because I enjoyed writing. I didn't care for all the so-called rules to writing, so I stick to storytelling.

So for me being able to answer your question about "the mechanics" of writing? Well that would be a little too pretentious for me to try to do. See I don't know about any of that stuff.

It's funny how it all works out really. I've been telling the story about me drinking with that monkey for over 35 years all because it is just plain funny and everyone usually gets a laugh hearing it. I've tried writing it before, many years ago, and it was so so. Then I tried again and it came out more to my satisfaction. A few weeks ago I pulled it out, dusted it off, and again tried to work on it again. This time I shortened it, I cleaned up the language, and took out a few things.

I write as if I'm writing a letter to a friend, and it works for me. I do believe that whoever said, "Writing is re-writing" was pretty much on the money. But for me, I didn't find it a lot of work this time. Probably because to me the "Tale of a Drunk Monkey" is fun. I can still remember it as if it happened yesterday. And all in all, it was a great night! It was one to remember.

And as for the story itself, well I'm happy with it if you got a good laugh out of it and maybe wanted to share it with a friend. To me, that means it was a pretty good story.

If you'd like to read it again, here it is.

Tale of the Drunk Monkey, a short story by Tom Correa
http://americancowboychronicles.blogspot.com/2011/02/getting-drunk-with-monkey.html 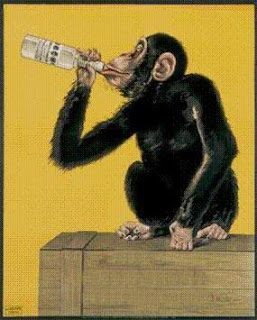