I just got an e-mail from a friend, that I know is supposed to be a joke but it does make some good points!

I don't know if a Muslim can live his life as an American even if he comes to this country and becomes a citizen. I don't believe it's possible to live in America, or Britain, or Germany, or France, or Denmark, or the Netherlands, or Russia, or anywhere in the world, and have a stated desire to be a citizen of that country yet while not being willing to assimilate into that given nation's society.

I believe it is impossible to fool yourself into thinking you can be an American, or British, or French, or German, or Russian, or Dane, or Dutch, while at the same time not wanting to be that specific Nationality with all of its traditions, values, and way of life.

And yes, it is about "living" your Nationality plain and simple. Muslims can't do that because they are too occupied with "living" a backwards religion of hate and barbarism.

When I was 8 years old, my great-grandfather was 88 years old. He was born in the Azores, and was brought to Hawaii as an Indentured Servant in 1909. Though Indentured Servitude legally ended in Hawaii when it was annexed by the United States in 1900, many companies back then kept the practice going for years. To make it sound more legal it became known as "Contract Labor."

Being Portuguese and 33 years old when he arrived, he never really learned to speak English very well. I guess it's much easier to learn a new language when you are younger. It also helps when you're not surrounded by others who only speak your prior language.

My great-grandfather used to tell me that I wasn't Portuguese and in fact that I was an American. He did not live like a Portuguese man in America, he lived like all Americans live.

He loved America's traditions, and values, and of course our form of government. He knew how hard it was to live poor and under an dictatorial government. He wanted me to know that my Nationality is American and that I should be proud of my Nationality. My Nationality, unlike his was when in the Azores, is one of a free people. I am part of a Nation where no one can dictate to me how to live.

That's where Muslims run into a problem. They are a strange sort of Cult really. They are dictated to by crazies and lunatics filled with venomous desire. And what's worse is that they are subservient to their religion first and foremost. National pride means nothing to them. For example, here in America a lot of us wonder why Muslims are so angry and are so quick to commit suicide?

Well let's see now, take a single Muslim man for example, how can you be an American? It would be too difficult!

You are forbidden from doing what Americans do. You have no Christmas. No shopping for gifts. No cheer. And please don't try to tell me about Christmas being "a Christian religious holiday!"

It's a lot more than that anymore! Heck, I've known Americans who were Jewish, Buddhist, and agnostic who give presents and have cheer during the Christmas season.

And besides Christmas, you have no NFL, or even High School Football, or Soccer. No television. No music. No tailgate parties. No cheerleaders. No sexy women, and even if you did you absolutely treat them like shit and keep them covered up with a blanket.

You have no pork BBQ! No hot dogs, not even Kosher Hot Dogs, or Kielbasa (Polish Sausage), or German Bratwurst. No burgers. No chocolate chip cookies. No lobster, actually no shellfish of any sort, or even frozen fish sticks. No nachos!

You have no Beer Nuts. In fact you are forbidden from drinking beer. No beer of any kind! And to make yourself even more anti-American you have no NASCAR and no baseball!

You just don't get it. These things might be sort of minor on the scale of important things in an American's life - but pards, these things are all a part of America in some way or another.  You don't have to do them all, but not any?

You dress in rags and wear towel on your head. The women in your religion have to wear baggy dresses and veils at all times. Your bride is picked by someone else, and she probably smells just like your donkey but your donkey has a better disposition.

And yes, you want to bring your wonderful sounding society including your crazy concept of law here where we don't want it!  Actually that sounds a lot like the Democrat Party, they're always trying to impose things on Americans that Americans don't want.

Of course, with all that's against you, most of us can't help but wonder why you haven't told your neighborhood Iman to go to Hell!  Of course, we also wonder why if some so-called Holy Jackwipe hands you a belt full of bombs and tells you that when you die it all gets better - that you actually go and do it! 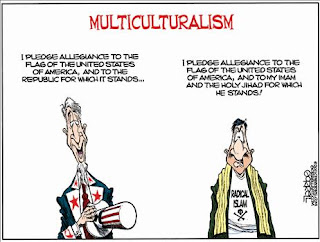