Worth a Read, It's about Cowboy Ethics

I read this article and thought it was really well done. I hope you enjoy reading it as much as I did. I decided to reprint it here so that people can find it just in case the link to it wouldn't work. It's short and really worth the read.

Why the Cowboy Code Is Not Frivolous
By Patrick Dorinson

The other day the Montana State Senate passed SB 216 sponsored by rancher and Senate President Jim Peterson. The bill is simple and direct and it doesn’t cost the taxpayers a dime. SB 216 would adopt The Code of the West from the book "Cowboy Ethics" and make it the official Montana Code.

"Cowboy Ethics" was written by James Owen, an investment professional who after Enron and the other Wall Street scandals of a few years ago, decided it was time to take a good look at what we had become as a society and individuals. Like me he has a great deal of respect and admiration for the iconic American cowboy and the cowboy way of life.

He came up with his "Code of the West" which states some simple common sense principles that not just cowboys but all of us should try to live by.

The code includes admonitions such as "Live each day with courage," "Be tough, but fair," "Ride for the brand," and "Know where to draw the line."

Montana Governor Schweitzer has said he will veto any frivolous legislation. I guess he consider ethics "frivolous." He wants the legislature to focus on important things like jobs and a budget shortfall. He’s right that those things are extremely important. But the ethics and values deficit in this country is just as important as the fiscal and financial deficits.-- If life is just about dollars and cents then we are in bigger trouble than I thought.

Somewhere along the line we forgot these basic values and replaced them with a self-centered "grab all you can and forget the consequences" attitude and situational ethics.

Children cheat on tests and think it is not only okay but is a path to success.

In 2002 a study by Rutgers University found that cheating was rampant and in many cases accepted behavior among students. The director of the study said "I think kids today are looking to adults and society for a moral compass and when they see the behavior occurring there, they don't understand why they should be held to a higher standard."

If that is how our young people see the world Lord help us.

One student said,” I actually think cheating is good. A person who has an entirely honest life can't succeed these days."

She was 17 at the time and by my ciphering she would be around 26 now. With an attitude like that she should run for Congress.

And I can’t imagine things have improved since 2002 and my guess is that they have gotten worse.

Some politicians cheat on their wives. If a man will cheat on his wife what do you think he will do to the folks that elected him?

Bad behavior in public life will more likely land you a book deal, a reality TV show or a spot on Oprah than the consternation of society. You want proof?

Disgraced former New York Governor Eliot Spitzer romped with hookers and he now has a television show on CNN.

By the way hookers are now called "escorts" and they have become a part of mainstream popular culture thanks to Spitzer and actor Charlie Sheen.

And while the collapse of the housing market has many causes one big one was that some unscrupulous lenders approved loans although they knew the borrowers could not afford them. By the way the borrowers also knew they couldn’t afford them as well and now some of them just walk away from their obligations.

Now that's a great example for the kids, isn't it?

Some folks might say I’m “naïve” or “old fashioned” or that “times have changed and I need to get with it” whatever “it” is.

But when a nation forgets the values that made the country strong and discards its ethical compass as “outdated” that nation could be at its end.

And if not the end you sure as Hell can see it from here.

Here is the list of Jim Owen's "Ten Principles To Live By":

1. Live each day with courage

2. Take pride in your work

3. Always finish what you start

6. When you make a promise, keep it

7. Ride for the brand

9. Remember that some things aren't for sale

10. Know where to draw the line 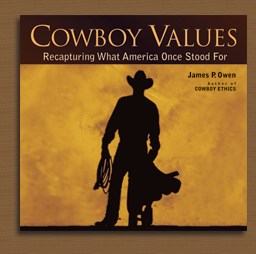 Yes indeed, I like the way the man thinks!