All Firemen Are Not Created Equal

I was asked to write about something in the News. Imagine that!

Yes, I was asked my thoughts about a Fireman who claimed to be "too distraught" by an incident to respond to the call. He didn't want to go to a call knowing that he was needed.

Since I was never a Fireman, I asked my friend, "Why ask me about it?"

My friend who knows my background regarding working with Marines once upon a time many years ago. It was a time in my life when I was working with Marines who let's say lost their way and needed to be shown some guidance. So OK maybe some needed it in the form of a swift kick in the trousers.

The guidance they needed was a refresher course to better understand the Corps' basic core values. One's core values is what guides us and keeps us on the straight and narrow. It is what pushes people to do their duty, do right, act fair, and live up to their Oath.

And yes, we all know about Bill Clinton breaking his Oath of Office. But as I said, you have to have values to start with.

I'm sorry to say that some people are brought up with no real personal value system. Some just never get it at home growing up, and then there are those that learn all too well what they are not supposed to do. For those folks, well I can only hope that somewhere in life they'll find that values are essential to leading a good life.

I've known a few people who weren't brought up too well, but they adopted the values of their extended family, or friends that seem to be OK, or a company or organization. A few friends that I've known found their life's set of values because they admired the core values of the American Cowboy. Of course having children will sometimes make you sit up and take a look at how you want to live or bring up your children. After all, they can be a wake up call to get your act together.

For me, I had both family and the Marine Corps. For my family it was simply supporting family because I was always told that family is number one. Of course doing what is right even when Grandpa ain't there to tell you to do it was a test sometimes.

My Grandfather was a great Cowboy. Besides riding and roping, building fences, repairing corals, doctoring horses, or hunting and fishing, I watched him treat people as he wanted them to treat him. I learned to be generous but not a fool, and be fair and honest. Because he was such a big believer in doing right in this world so you won't have a problem looking yourself in the mirror, so am I.

Honor, Courage, and Commitment are the values of the United States Marine Corps. They define a Marine. And like learning the Cowboy Code, the Corps' core values become an all important part of who you are for your entire life.

And yes, I know that all Marines don't adhere to those values. Heck, that was the "10%" that I worked with. Some were good and the refresher course worked well, while others it didn't. Facts are fact and the fact is that some Marines end up representing everything that Marines are not supposed to stand for. Duty means nothing to them, honor is a convenience, and courage is something that others will have but they we probably never know.

So when my friend asked me to write something about an Arizona Fireman who refused to respond to last month's shootings that left six people dead and 13 wounded including Rep. Gabrielle Giffords in Tucson. I became curious why?

The fireman was Mark Ekstrum, and as he said, he was "too distraught and distracted to focus on the emergency. And so why was he so distraught, well Ekstrum was supposedly a supporter of Congresswoman Giffords, and yes, he had voted for Giffords and worked actively to support her.

When I heard that, I thought that that doesn't make sense. If he was her supporter, then why didn't he want to be the  first there to help her? After all, he was a supporter right.

So why did he refuse to go on that emergency call?  It's now being reported that because of Ekstrum, his unit's response may have been delayed because the firefighters had to stop and pick up a replacement for him. Ekstrum gave a statement to his department officials earlier this week explaining his actions. The statement says he was aware of the shooting and became "distraught over the magnitude of how this would affect our country."

Give me a break here! Does that sound like an excuse, or what?

It's being reported that he was "summoned to the scene but refused to go on political grounds." And before you start thinking that this is some "kid" just hold off a minute, he is a 28-year Fire Department Veteran. Imagine that!

Supposedly after his crew returned, Ekstrum apologized to his co-workers and explained that the circumstances of the shooting "brought up a lot of anger and made him ineffective as a firefighter."

In a statement to CNN, Ekstrum said, "I am very passionate about my country and was distraught over the magnitude of how this would affect our country," And again went on to say, "I became distracted to the point of not being able to perform my routine station duties to such an extent that I seriously doubted my ability to focus on an emergency call."

Well, friends, I'm just glad that all Fireman are not created equal.

I read that Joe Gulotta, the assistant Fire Chief for the Tuscon Fire Department, said that "Ekstrum had been enraged by his perception that the shooter had acted out of ideological motivation."

Joe Gulotta shows that not all Fireman are created equal in that he called Ekstrum's refusal to respond "unheard of" and "unacceptable," and Joe said that his department was "moving forward with disciplinary action."

As for Mark Ekstrum, well he retired before that could happen just two days after the shooting. Imagine that!

It's a shame that Mark Ekstrum will never understand those words. He has no value system to sustain him. And how can I said that, you might ask? Well I believe that if he did, than he would have understood that doing your duty is not a pick and pull sort of arrangement.

When the call comes in and seconds are on the line, it is not your job to say which emergency is the one that you will go on and which one you won't. That attitude doesn't feed the bulldog. That's simply not what you signed up for, and agreed to. I believe that that sort of action is inexcusable, and maybe it should be considered criminal.

But right now, I can't help but wonder if Mark Ekstrum has a problem looking himself in the mirror without lying to himself. 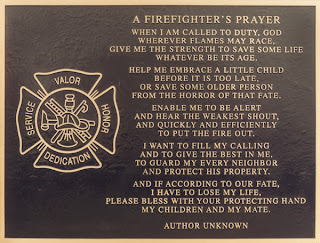