One Horse Who Ain't Done Yet

Here in the country a lot of folks have chickens, goats, sheep, pigs, cattle, and of course horses. It's not unusual to go down the road and see any of them at any time. Some folks raise sheep or pigs or say a cow for a 4H project, while others are just raising them for market and the freezer. That's just what folks do.

On our place we have horses. A few, nothing big, most are working horses or for pleasure riding. A few project horses that are coming a long slow. And yes some are always slower than others, but than again it's never a one size fits all horse world when it comes to training so this doesn't surprise me.

And then there is the Retiree! His name is Mac, and I got him when he was 24 according to his papers. I got him as "company" for my horse Murphy. And since Murphy had a hard time getting along with other horses, it was good to see that he and Mac took to each other.

My wife's new horse Tango is looking pretty good with the additional weight and open area to run. She and Tango are making strides getting to know each other. And yes, it really is nice to watch. As for my boy Murphy, well he's getting back in the groove slowly. He's had it easy for too long while I've fought some medical problems. Now it's time for him to get back into working shape and lug this old Cowboy around a while.

Among the things waiting for Murphy and Tango is the back country. Trail riding and checking fire breaks and roads is something that I've done in the past. I don't mind giving BLM a call and telling them what I've found. It saves them the manpower problems of having to send out a crew to check the back roads and such that has become fairly overgrown during this winter. I've been known to map it out for the CDF in San Andreas in the past. Of course the big deal is getting out on horseback because it's always great to get out.

Trail riding is what I do these days more than anything else, so it's just a matter of time when I hit the back country. It seems my days of moving cows are pretty much over, in fact many of my friends who were into cattle are now gone.

So now when the ground is nice and the days aren't too long, and maybe there's a crisp cool feeling in every mountain breeze, I look forward to riding. And yes, since lately its been great riding weather and now that my wife has her own horse everything is all that much better. It's only a matter of time before we're ready.

In fact I feel so good these days that as soon as our chores are caught up and the horses are saddled, we are heading out. At least that's what I thought the other morning, that is until my wife she said that she had to run into town for something or other and wouldn't be back until the afternoon. Then she reminded me to get off this computer, I still had chores to do.

As she was walking out the door, she turned around and told me that Ol' Mac had busted out of his stall in the barn. I don't think she cared about Mac as much as she did about her roses that Mac seems to mosey over to and munch on every time he's loose. But when I looked out toward the barn, there was no Mac in sight. Then I thought, well yes he might be getting himself in other mischief but at least he wasn't heading for my wife's roses.

At 32 years old, he's still up to trying to keep up with the younger horses. He tries but he can't, and you can watch him as he walks and you'll know in an instant that the arthritis in his hind end is just bad stiff for the old guy. So that's why Mac has Retiree status around here.

And heck, he deserves it! He was my go to "Bombproof Horse" that I saddled for my wife when she first rode with me. A novice, he was perfect for her. And yes, even in the last few years he was the one that I saddled for the kids to ride and feel the pleasure that only sitting on a horse brings.

But when Mac broke out of his stall and didn't head for my wife's roses, well I figured that I better check on him. I found him behind the barn in an area of tall green grass. He was just laying there, not grazing at all but instead just taking in the morning sun.

I didn't even bother putting a halter on him. No, he didn't need it. So I looped the lead rope around his neck and as he got up slowly I could feel the effort the old timer was making to do such a simple task. He was old and tired really.

When I led him into a pen and let him in the gate, Mac just let himself go and laid flat in the dirt. He let out a low grown that made me sigh. I knew in my heart that the old man was ready to die.

I felt bad for a moment and just watch him lay. And knowing what you have to do is sometimes not easy nor fun. So I walked over to the phone in the barn, and from the breezeway I picked up our barn phone, and I called my neighbor to ask if he'd bring over his backhoe and dig me a hole. It looked like I needed one. I told him that my old red horse Mac was pretty much done.

It didn't look good and I didn't know when, but I thought it would be soon enough. My neighbor being the wonderful man that he is told me to just let him know when, and there would be no problem and that he'd be happy to help me out again.

I thanked him and after hanging up to phone, I came out of the breezeway expecting to see my Ol' Mac laying there prone with not a breath left in him. 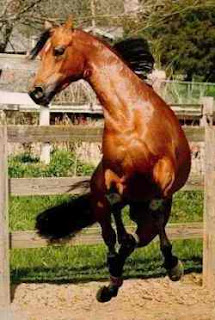 But instead, Mac was moving around the pen throwing his head up and down again and again. His mane was flying and his tail was pumped high and he even reared back and pawed at the air once and again.

Then I knew what it was, Ol' Mac must have heard me on the phone talking to my neighbor and started acting up as if wanting to say "Hey now! Look at me! I'm moving! I'm moving!"

You don't think so? Well for me, I won't put it pass him to know what was said on the phone. For me, well I believe they're smarter than we'll ever know!