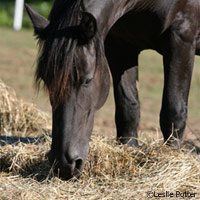 Friends, here's a short article for you!
This week is the first week of the month and that's when I go get my hay for the month.  I usually call the place that I get my hay from to find out whether it's comes in or not before driving down to pickup a load.
Since I feed my horses straight alfalfa for the extra protein, that's what I buy.

Well, I just got off the phone with my friend who sells me my hay.  He advised me that the alfalfa that sold for $10 a bale last month is now going for $14 to $16 a bale.  Then he let me know that alfalfa hay might be as high as $20 a bale in another month.

I spoke with a friend who runs a dairy and he says that his feed bill and fuel to ship to market is through the roof. Of course the poor guy gets hit coming and going.

The reason the feed bill is so high is because the price of gas and diesel has skyrocketed in recent months. Then to add insult to injury, his fuel bill has skyrocketed because he has to get his milk to market. And this applies to every part of the food and agriculture industry.

Ranchers have to supplement their cattle's feed, especially in a Feed Lot situation. They pay high prices for the feed and their fuel to ship their cattle to slaughter cost an arm and a leg. Farmers have the same problems.

And what happens when we go to the store to buy food, well friends we'll probably either buy less or not buy what we can afford to do without.  In my situation, since I'm retired, I can't exactly work overtime to help bring in extra money. So guess what, a few horses may be leaving here real soon.

Fact is that if I can't afford to feed them right, then I have to cull the herd.  The ones that ain't worth keeping may be leaving.

And as for the average American who works hard to make ends meet, they will have to either get more hours or cut back as well.

Maybe ask for a raise, you say? Well folks, the last Real Economic Depression that Americans suffered through was not in 2008 and 2009 or in the 1920s and 1930s. It was actually under President Jimmy Carter during his term in the late 1970s.

Back then the U.S. Inflation Rate was 14%, the National Average Unemployment Rate was 16%, Interest Rates were as high as 21.5%.Nationally.  Yes, the Prime Interest Rate hit 21.5% in December 1980, the highest rate in U.S. history under any President. 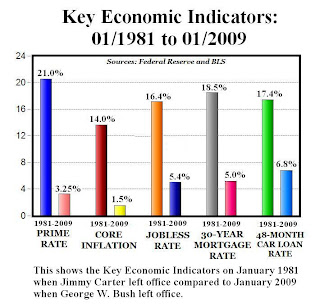 Yes, that's really how it was. And yes, every time the Democrats talk about "the worse economic conditionssince the Great Depression" - they seem to conveniently skip over the dreadful years of the Carter Administration.

By the time he left office in January of 1981, he had left President Ronald Reagan with an American Economy in shambles. It was all due to Carter's Economic Policies, which not surprisingly is very close to Obama's Economic Policies.

So maybe when President Barack Hussein Obama is finish celebrating the killing of Osama Bin Ladin, he can do something about our Economy -  because friends, if someone doesn't start working on the economy soon it's all going to Hell in a hand-basket.