Heather Russell and The V.A. 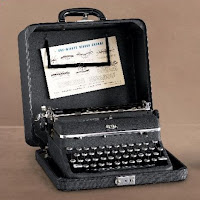 Every once in a while, I'll meet someone who really sticks out.
Yesterday morning, that person happen to be a young women who's old enough to be my daughter  - if I had a daughter.
Her name is Heather Russell. She's 31, 5 foot 2, slim with curly auburn hair, dark eyes, and a smile that made my hectic 4 hour trip to the VA Hospital an almost pleasure to go through.

Yes, once I hit the Bay Area it was bumper to bumper commuter traffic. Bumper to bumper at less than 35 mph just so I could get to the Veterans Hospital in Palo Alto to run some tests.

You see, I've been fighting with my left kidney for the better part of 30 years now. It has been giving me fits of pain and discomfort every now and then over the years. The problem lately is that that "now and then" has become "more and more often." And yes, this last year has been a real joy  -  if you know what I mean.

Originally the VA told me that the pain was probably just my bad back.  That is, they did until about three or four weeks ago when I had seen a different doctor at the VA to ask for a second opinion. After seeing him, then it was a different story because immediately he sent me in to get a CAT Scan and blood work.

Granted after the CAT Scan that I didn't hear from anyone for a while, but I figured no news is really good news sometimes. I also figured that if they didn't find anything than there really was no need to contact me. Heck, maybe it really is just my back.

Then last week Thursday a nurse from Urology called. The word was that the Nuclear Medicine people at the VA Hospital in Palo Alto would call me to schedule a follow up Renal Scan to see exactly how my kidneys are doing.

Now I have to admit that I was a little apprehensive about going though the Nuclear Medicine Intravenous Test.  I wasn't looking forward to another dose of radiation from any source. But when I got to Palo Alto, well let's just say that that was all changed.

The people in that department are especially nice and respectful. No, they don't appear to be just going through the motions as some others in the VA Hospital System do. They are, well, honestly friendly.

The Veterans Administration has some really great people working for them. Most, if not all, are very nice, courteous, respectful folks. Most are definitely there to help Veterans. But like with any organization, there are always a few who are always in a hurry or have a tendency to be a little condescending.

I'm very fortunate to be receiving my Health Care from the VA, and especially at their Palo Alto Hospital. On the overall most people who work for the VA in Palo Alto have really good attitudes. Yes, very friendly.

And friends, like you, I too have a preference for friendly people. Personally, I'm pretty sick and tired of rude and angry people.

The San Francisco Bay Area traffic didn't disappoint me. It has always been fast paced, but lately it seems worse than ever. The congestion, the higher gas prices, the stop and go, stop and go, people cutting each other off, the dirty looks, the horns, the fingers, yes it was all there yesterday morning driving in.

So after yesterday's long drive, I was tired when I got there. After parking as far away from the Hospital as I possibly could not out of my choice, I headed to the hospital and found the Nuclear Medicine department to check in.

Yes, it was nice to be greeted by some real nice folks.  It was great hearing polite questions and polite requests. It was outstanding how a Nuclear Medicine technician named Heather Russell took the time to be both pleasant and professional.

Her approach to her duties was excellent in that she was very confident and explained to me what all was going on. She told me what the test was looking for and set me a little more at ease in the process. She walked me through it step by step and was both clear and concise in the things she wanted me to do, but certainly without being mechanical about getting what she needed from me.

She saw that I had no where to place my arm through the 45 minute test, and immediately she found a table and brought it over to help me out as I laid there. She made the whole process easy.

After the test was over, I joked with her that I was going to find her a nice doctor for her to date.  She laughed, and yes she laughed honestly. You see there's nothing fake about Heather Russell. She's as genuine as they come.

And yes, the VA is lucky to have her!