The Corpse of Osama Bin Laden 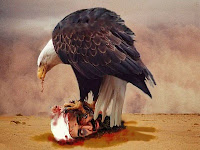 The News is wonderful!


The biggest Islamic Terrorist in the world was shot in the head while hiding behind a women.  And honestly, I'd expect no different from a crazed rabid dog like Osama Bin Laden who would kill the innocent in the name of Islam.
All night, all of the TV shows have been pre-empted by the News of him getting his justice.  I'm so very thankful that he wasn't taken alive. 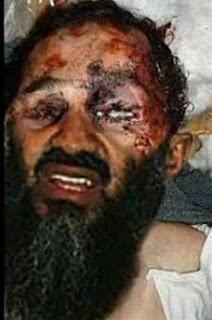 No one knows how grateful I am to the U.S. Navy SEALS for making the back of his head explode like a melon.
Right now the News is talking about giving him a funeral with full Islamic rights.
My first thought is that he waved any and all rights when he savagedly killed thousands of people for no other reasons than hate and envy.
He hated and envied us, so that made him want to murder us.
And now, well now the Obama White House is talking about giving him full Islamic burial rights and ceremonies.  Then they're thinking of burying him at sea.  To me, I thought we were trying to stop polluting the waters.
I personally feel that they should give him the same respect that he gave those people who were never accounted for on 9/11.
When the we were attacked on 9/11,  the number of people killed when four hijacked jets crashed into the World Trade Center, the Pentagon, and Flight 93 when it came down in a western Pennsylvania field, was 2,975 all toll.

Of the pieces and parts of the innocent victims, there were over 1,200 people who were ground to nothing,  Nothing.   There were not even enough of them to identify or bury.

It has been a said that the families of those missing victims have had no closure because there has never been anything of their loved ones to bury.

So what would I do with the Corpse of Osama Bin Laden?  Well, since he was an evil Muslim, I think I'd feed him to pigs to keep him from entering Islamic paradise.
Although that is being really mean to those pigs - isn't it!
Story by Tom Correa
Posted by Tom Correa at 2:16 AM